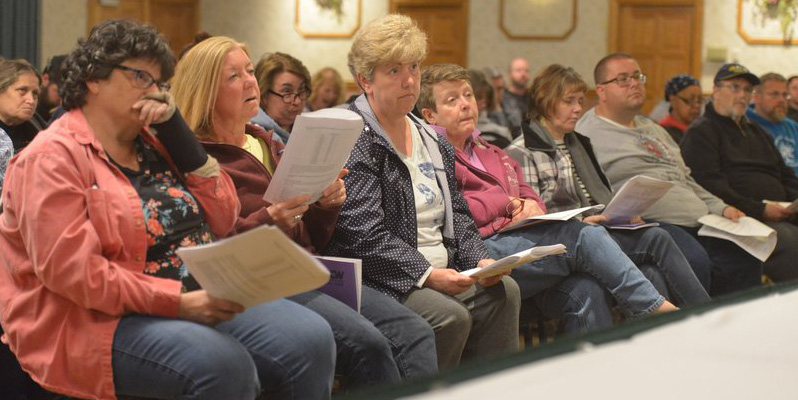 Stop & Shop workers ratified a new contract after beating back a raft of concessions with an 11-day strike. Photo: UFCW 1459.

Thirty-one thousand workers at New England grocery giant Stop & Shop struck for 11 days in April, beating back concessions with a display of power that took management by surprise.

Members of five Food and Commercial Workers locals in Massachusetts, Rhode Island, and Connecticut walked out April 11 over company proposals to hike health insurance premiums and out-of-pocket costs, kick 1,000 spouses off the company’s health plan, get rid of time-and-a-half on Sundays, and gut workers’ pensions.

“I think they thought we were bluffing, and they were going to call the bluff.”

“Who runs this store? We run this store!” was the chant on the picket line one day in Holyoke, Massachusetts, a town once known for its paper mills. Strikers walked in long circles in front of their store’s loading dock, stopping a bread delivery.

Teamster drivers respected picket lines and refused to make deliveries throughout the strike, leaving shelves unstocked and perishables dumpster-bound. Photos from inside some of the 240 struck stores showed moldy bread sitting out on shelves. Essential items like water and vegetables were not to be found.

“Marty the Robot,” recently rolled out by Stop & Shop to alert employees to which aisles need cleaning, was left to wander the aisles alone, with few customers to scare or workers to annoy. (Marty is “like a Roomba who can’t clean,” said Kim Terranova, a worker at the Northampton, Massachusetts store.)

Strikers reported that even customers who crossed the picket lines would often come out minutes later, empty-handed.

On Easter Sunday, the parking lot at the Northampton store sat empty—and not because the store was closed. Union member Lori McSheffrey, a front-end manager who has worked at Stop & Shop for 39 years, said that’s unheard of on this holiday feast weekend.

“It’s like this at all the stores,” she said.

The mood on the picket line was friendly. McSheffrey met teachers, nurses, Verizon techs, and transit workers who had come out to support fellow union members.

Meanwhile at another picket in Hadley, Massachusetts, a customer pulled up to say that she really needed to buy flowers for church, and that she had been a regular at the store for 20 years. The strikers kindly asked her to not cross. She drove off with a wave.

At the main entrance to that store, a few customers taped up their receipts from other stores to show they had changed their usual shopping habits.

The strike, which lasted through the traditionally lucrative grocery week of Easter and Passover, cost the company an estimated $90 to $110 million—3 percent of its annual profits.

“In nearly 30 years, we haven’t seen a strike as effective and devastating as this one,” grocery industry consultant Burt Flickinger told the Boston Globe. He estimated that 90 percent of regular customers took their business elsewhere.

Stop & Shop used to be known for giving full health benefits to part-timers, something that’s uncommon in the industry. But in 2013 negotiations, the company used the Affordable Care Act as an excuse to eliminate insurance for thousands of part-timers who work fewer than 30 hours a week.

This year, for those workers who still get health benefits, Stop & Shop wanted to double out-of-pocket expenses and increase weekly premium costs by up to 90 percent. (It also wanted to make part-timers start paying premiums for vision, dental, disability, and life insurance.)

That was one reason for the strike. Another reason: for existing part-timers, who make up 75 percent of the workforce, Stop & Shop was pushing to replace time-and-a-half pay on Sundays and holidays with a set premium that wouldn’t increase as wages increased, and an even lower premium for new hires.

That would cut into paychecks that are already tight, since hours can fluctuate dramatically. McSheffrey, for instance, is technically part-time. She said she works “35-40 hours and sometimes 50 hours a week—but then they’ll cut me down to 20 hours if they want.”

Because her hours are so insecure, she said, “I have to work a side job. Most people do.”

The company also came gunning for the pension, initially proposing to contribute only to 401(k) plans. Heading into the strike, the company had moved off that initial offer, but it was still refusing to increase contributions to fully fund the pension plan, which covers all union members at Stop & Shop, though there are multiple tiers.

Meanwhile staffing has been on the decline. Jill Subocz has felt the impact over her 38 years working for Stop & Shop in Hadley.

For a long time she was a front-end manager, responsible for keeping registers staffed and customers happy. But “when the store started making cutbacks on hours and help, I was stressed pretty much 24/7,” she said, “because I would worry about giving good customer service.”

Subocz demoted herself back to cashier. But these days even working the cash register is stressful, she said, “with the lack of people to call to come up front and help.”

Did the company need concessions? In a word, no. Stop & Shop’s parent company, Netherlands-based Ahold Delhaize, made $2 billion in profits last year. Over the past two years it has increased shareholder dividends by 11.1 percent, paying out $880 million—all the while claiming that concessions were necessary to stay competitive.

It was Easter evening when the union claimed victory. The new contract, approved the following week at local union meetings, rebuffed most of the company’s demands.

Current health insurance benefits, out-of-pocket costs, and deductibles will stay the same, with premium increases of $4-$8 per week. Workers can keep their spouses on their insurance, even if a spouse’s employer offers health benefits.

Stop & Shop agreed to fully fund the pension, increasing contributions by as much as $35 a month. The agreement does, however, introduce a sixth tier on the pension for new part-timers, who will accrue pension benefits equivalent to just $12.50 per month times their years of service.

In Massachusetts these takebacks reflect a “grand bargain” signed into law last year by Republican Governor Charlie Baker. It mandated a $15 minimum wage with a five-year phase-in, but simultaneously did away with the state law that used to mandate time-and-a-half on Sundays and holidays.

The union won language that will keep wages a certain level above the minimum wage. Full-time employees will see raises of up to 62.5 cents an hour, while part-time raises range from 25 to 55 cents depending on seniority.

With strategic timing and broad support, this strike showed how much power workers have.

But it’s not the last word. Local 1459 VP Jones said the union’s next step should be to develop the new leaders it discovered during the strike and keep them engaged. “This is just the latest saga,” he said. “Three years from now, we need to be even better prepared.”

Griffin Buell is a carpenter and incoming student at the Labor Center at UMass Amherst.