Interview: Corruption and Collaboration in the UAW 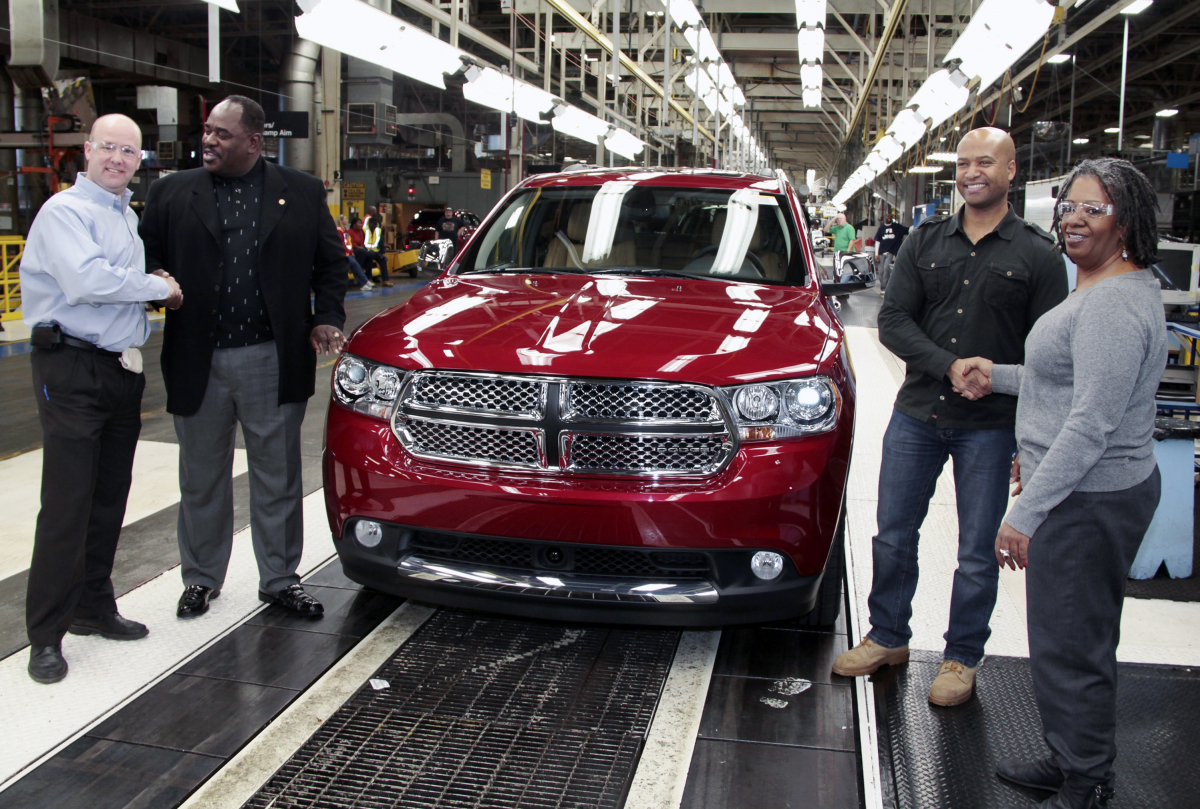 Former UAW Vice President General Holiefield, second from left, is among those charged in a widening corruption scandal between Fiat-Chrysler and the union. Photo: FCA, CC BY-NC-ND-2.0 by 2.0

What should we make of the widening federal corruption investigation that implicates officials from the Auto Workers (UAW) and Fiat-Chrysler (FCA)?

In December Iacobelli agreed to a plea deal, admitting that he gave company money to Holiefield for the specific purpose of influencing discussions over the repurchase of the portion of Chrysler’s equity owned by the Voluntary Employees Benefits Association (VEBA), an independent trust established by the contracts to lift the burden of retiree health care from the Big 3.

To put these developments in context, Joe Richard talked to Bill Parker, a 44-year veteran of the UAW at Chrysler and Labor Notes stalwart.

Parker, who spent 18 years as president of Local 1700, has consistently rejected the politics of the Administration Caucus. He brought together local Chrysler leaders to reject the concessions taken at Ford and General Motors in 2005-06. He was elected chair of the union’s Chrysler National Negotiating Committee in 2007 and then issued a minority report against the deal, based on opposition to the two-tier wage system—placing him at the top of Holiefield’s enemies list.

Faced with the closing of his plant as part of the 2009 bankruptcy, Parker led the fight to keep it open and building vehicles without any concessions. It was the only one of the eight plants to survive.

After declining to run for reelection in 2013 for health reasons, he returned to the line. In 2015 he publicly challenged Jewell over his betrayal of commitments made to the new hires—contributing to the rank-and-file rejection of the 2015 contract and to its replacement with a contract that provides a path to wage parity for all Chrysler workers. We began by asking Parker how he sees the underlying issues inside the union.

Bill Parker: First of all, I have to say that the corruption is wrong, it’s despicable, and there’s no justification for it, and the actions of a few people in the leadership of the UAW International should not discredit the honest efforts of others, especially those at the local level.

But I don’t think that’s what the main issue is with the UAW today. I think that even if every officer, board member, or international representative were 100 percent honest and incorruptible, we’d still be in exactly the same position today that we are, relative to the basic terms of our national negotiations and the attitude within the union leadership towards the company and the membership.

These attitudes aren’t a reflection of corruption or individual fulfillment of greed, but they reflect something worse: the failure of the union to maintain itself as an independent, working-class institution with a philosophy that is separate and apart from that of the company.

Labor Notes: Do you think this is the logical outcome of the UAW’s history of collaboration and partnership with the Big Three?

I don’t know that it’s the logical outcome. I think it’s a possible outcome, that people would be on the take, and find ways to enrich themselves. But I don’t think it had to happen.

Historically, the UAW was not one of the unions associated with corruption within the labor movement, and presented itself as a progressive, clean union. And now that’s gone away: that’s shifted. I don’t know if the UAW’s Administration Caucus can ever regain the trust of the membership.

But the issue facing union members, in terms of contracts that don’t meet our needs, and the failure of the UAW to advance our standards of living, the failure of the union to challenge the company’s demands for more and more takeaways—this has preceded the corruption charges.

The issues we face stem from the failure of the union to have an independent agenda from the companies. And this has been a process that’s been unfolding for years.

When do you place the beginning of that process?

I think a lot of this began following the concessions given to a near-bankrupt Chrysler in 1979, ’80, and ’81. GM and Ford started demanding givebacks too, and the UAW agreed to reopen their contracts to grant concessions, even though GM was profitable that year.

In 1984, with the rollout of programs focusing on “jointness” and partnership with the companies, you saw the replacement of adversarial unionism with cooperation and flexible contracts where the International would allow local deviations from the national contract to help the company.

Eventually the leadership began to say that we all have to take responsibility for the company’s profitability. And as soon as the leadership says that, there’s no good outcome. This led to things being seen from the point of view of UAW Ford, UAW GM, UAW Chrysler, or a form of enterprise unionism.

So would you make that connection then, between the idea of partnership with the companies and the introduction of two-tier wages and benefits?

The discussion of two-tiered wages and benefits goes back to the early and mid-2000’s, actually before the economic crisis of 2008-2009. It happened because the UAW stopped functioning as a union. Local unions were played against each other by the company, which was threatening to shut down different facilities, and the International told us, “You’re on your own. Good luck!”

If the International won’t make a fight about it, and one local starts making concessions, it opens the door to everyone agreeing to concessions in a downward spiral to try to keep their plants open.

Article 19 Section 6 of the UAW Constitution states that one of the duties of the UAW Executive Board is to examine local contracts and make sure they don’t undermine other contracts elsewhere. In other words, there’s a specific rule in place to try to prevent that exact whipsawing that the companies were doing.

But if the International union isn’t willing to use its collective power to defend its members, then it just leaves each local to fight on its own. What can a local do when it’s told that there is overcapacity or their plant is unprofitable? The only thing it can do is make concessions.

The only answer is to fight like a union, threaten to strike other plants, shorten the workweek. This requires a fight of the whole union.

This background helps to explain a lot. Can we have a sense of where these recent corruption allegations fit into the overall picture?

The VEBA sale has to do with Chrysler’s reorganization after the structured bankruptcy back in 2009, when the Obama administration bailed out the auto industry.

And it’s in 2009 that Iacobelli becomes more important within the company. By the time of the 2011 negotiations and then eventually in December of 2013 he’s in the position to influence decision-making in the UAW Chrysler Department by funneling FCA money through the UAW-Chrysler National Training Center to union officers and representatives.

This is what he pled guilty to in December. But it is important to recognize that the VEBA is a trust, independent of the UAW, though obviously influenced by it. UAW President Dennis Williams made this point well.

So what then, do you think, was the impact of the corruption during the 2011 negotiations between the UAW and FCA?

At the national level, I think it largely didn’t impact them. The negotiations by and large follow the pattern established at the target company, and in 2011 the UAW picked GM as the pacesetter.

It would be hard to say that there’s any direct correlation between the corruption at FCA and the poor wages and benefits in that contract because the same thing occurred at GM and Ford. In the national agreements, the UAW president negotiates the wages and benefits, not the VPs like Holiefield.

As a final question then, how do rank-and-file UAW members and local unions begin to take the steps necessary to get out of this mess and start moving in the direction they need to?

Currently the union is structured in a way to make this exceedingly difficult. Even the union’s internal review board described the union as functioning like a “one-party state.” This is a public review board of outside jurists, academics, and religious leaders.

One of the most positive developments in recent years was the rejection of the 2015 contract by the Chrysler rank and file because it took away any path to wage parity for the new hires. Was Norwood Jewell’s attempt to get rid of the earlier commitment the result of collusion? We may never know. Fortunately, the membership rejected that.

We also have a particular issue at FCA in the treatment of longtime temporary part-time workers, who were terribly mistreated and got screwed in the 2007 contract, while temporary workers at GM got grandfathered in as traditional employees if they were converted to full time status. At Chrysler it didn’t get resolved in the 2011 or the 2015 contracts. Was that a result of collusion and corruption? I can’t answer that question. But it’s something that’s now unique to Chrysler.

Over the years, a lot of the power that used to rest with the local unions has been shifted up to the national parties. When I was president of my local, I was always frustrated because a lot of the decisions weren’t made anymore by the plant manager, but by the corporate headquarters, and decision-making that used to rest in my hands as local president was taken away.

For example, with “alternative work schedules” I was able to stop the company from putting us on four 10-hour shifts per week, but then that was taken away from us by the International.

In light of the payoffs to Holiefield, it is no wonder that the company wanted him to have the power to make decisions about work schedules and overtime and representation.

So winning power back to the locals could shift the center of gravity within the union?

The convention is a difficult body to influence. The corruption at Chrysler may or may not be an issue for people who come from the different multiple jurisdictions of the UAW, whether it be the academic workers, the parts sector, the gaming industry, whatever.

It’s going to take rank-and-file organization to challenge the Administration Caucus. Again, whether members of the Administration Caucus are corrupt or 100 percent honest, they’re doing the union a disservice by stifling democracy within the union and by stifling struggle against the companies. And the membership is going to have to challenge them on both of those issues. They go hand in hand.

Interviewer Joe Richard is a writer and union activist.