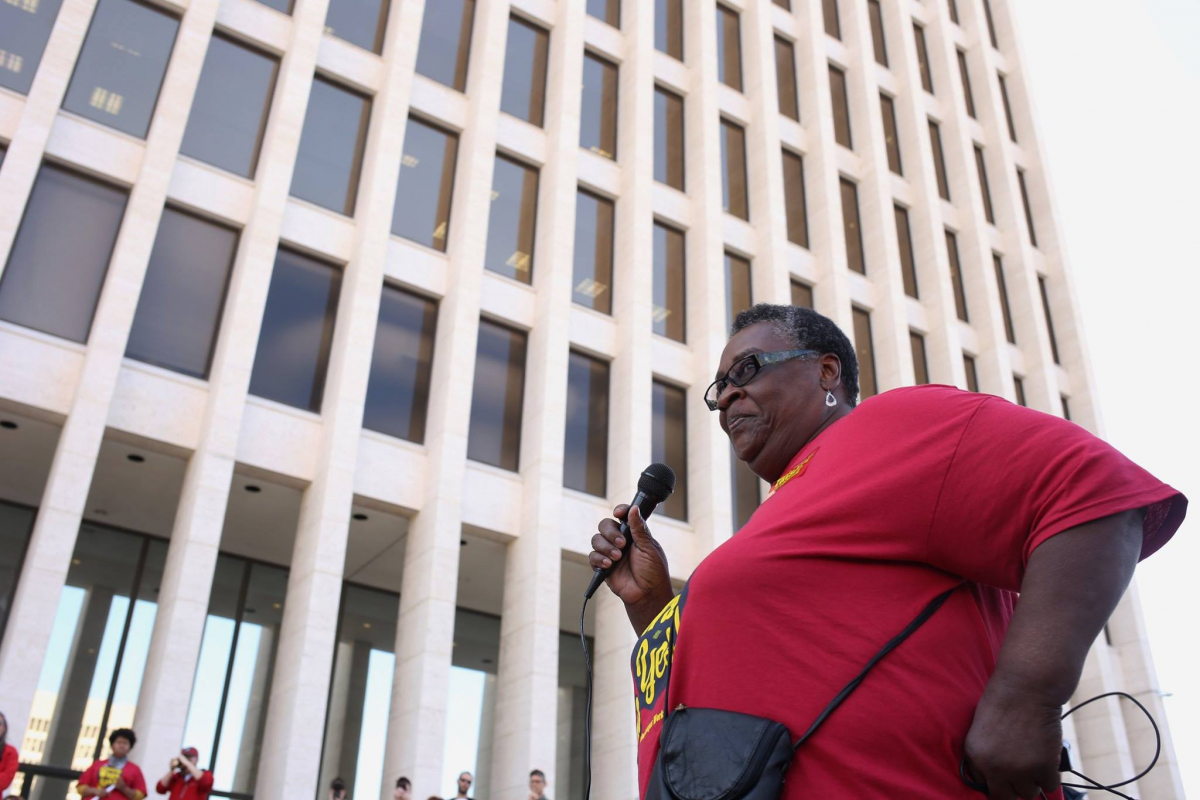 Even with few legal rights, and no union recognition, this union beat back one of the most powerful and wealthiest politicians in the country, protecting thousands of jobs and public services. Photo: Tennessee Is Not for Sale

Two years ago Tennessee’s billionaire governor Bill Haslam, then the richest elected politician in the country (now it’s Trump), quietly initiated the largest and most radical restructuring of public services in the state’s history.

His plan was designed in secret and written as an executive action, deliberately excluding legislators and the public. It would outsource every one of the state’s thousands of facilities management and service jobs—at campuses, parks, even armories—every custodian, maintenance worker, electrician, plumber, painter, and groundskeeper.

Everything was in place for swift implementation. Both houses of the legislature had Republican supermajorities. Even the university boards were stacked with Haslam appointees. The governor enjoyed tremendous popularity and expected no opposition. In “right-to-work” Tennessee, public workers have no right to collectively bargain.

Deep red Tennessee is an unlikely place to find a large, social justice-minded union local, but for 18 years UCW has been growing member by member. Our union was born in a living wage fight led by custodians and their student allies. Today we have 1,800 dues-paying members on 18 campuses, including hundreds of the facilities workers Haslam had in his crosshairs.

Without the legal right to bargain, we rely on workplace and community campaigns and coalitions with other unions and off-campus allies. And UCW has chalked up significant victories—reversing terminations, winning health care and expanded safety protections, increasing base pay at the state’s largest campuses, and becoming a leading voice for economic justice at the capitol.

To win this fight, we would need to reach well beyond our campuses and get tens of thousands of people to take up our message. So we kicked off our statewide #TNisNOTforSale campaign by issuing press releases, working the phones, and doing news interviews, pushing out word of the privatization scheme as far as possible.

A town-hall call reached hundreds of members. A Facebook group surged to 7,000 contacts and became the main depot of information, news, and updates. By the end of the campaign nearly 100 stories, letters to the editor, and op-eds would appear in state and local papers, with dozens of radio and TV news stories.

Meanwhile our coalition began to take shape. Members got hold of county commissioners in a rural county where outsourcing at the state park would spell economic disaster. We invited government watchdog groups, environmental organizations, and other unions to join the fight. We alerted small local businesses that they could lose their stable university contracts if the privatization plan went through. In Knoxville, 20 of those businesses signed a letter calling on universities to decline to participate in Haslam’s scheme.

Most critically, we recruited more of the targeted campus workers, who saw the union as the only hope to save their jobs. Members talked to co-workers at work and at the time clock; with the help of organizers they signed up more than 200 of those new contacts as dues-paying union members.

Those new and old members began contacting their representatives, including many Republican legislators. Some of the members were Republicans themselves; they didn’t just speak the language of these representatives, they shared some values in common.

We used grassroots lobbying, where members mobilize to speak to representatives themselves, direct action in the capitol, and dozens of one-on-one meetings. Populist-driven tension and union members’ deep roots in legislators’ constituencies allowed UCW to build a surprising bipartisan coalition. One ally, a Republican senator whose constituents included more than 100 UCW members, observed in a privatization hearing that he was beginning to understand “why people are so drawn to Bernie Sanders on the one hand, and Donald Trump on the other.”

By hammering away at the billionaire governor and his executive power grab, we divided Republicans legislators—driving a wedge into what would have normally been the natural alliance backing Haslam’s plan. Gradually we built an alliance of Democrats and Republicans who opposed the outsourcing—without giving way to the anti-immigrant rhetoric that some of the Republicans occasionally expressed.

Haslam’s privatization scheme was written to exclude legislative action, but UCW complicated this plan by introducing proxy legislation that would affect future outsourcing contracts. This forced multiple hearings, well beyond the regular session, where the governor’s highly-paid outsourcing consultants were peppered with questions by legislators, and vied with the testimony of UCW members and allies. Through our persistent lobbying, we got a majority of legislators—including every Democrat—to sign on to an open letter the union wrote and circulated, calling for a halt to the privatization plan, in defiance of the governor.

The campaign’s most dramatic moment came on the day of a key outsourcing meeting, when UCW members occupied the entrance to the state office building and refused to leave. Representatives of the administration were forced to look into the chanting faces of the workers whose jobs they wanted to outsource.

One year into our campaign, the governor conceded that whether to participate in outsourcing would be decided campus by campus. That brought the fight to our home turf. The state moved ahead with signing a contract with Jones Lang LaSalle—already a state contractor and a company where Haslam has a record of personal investment—but campus leaders would choose whether to opt in or out. Other state agencies, however, were still under the purview of the governor.

With momentum on our side, we kept mobilizing. Workers rallied, got more press, lobbied local governments, and met with key campus administrators. Memphis and Chattanooga passed city council resolutions calling for opt-outs. And then on October 31 the leadership from all the campuses in the University of Tennessee system, which employs a majority of the facilities workers in higher education, opted out.

Even with few legal rights, and no union recognition, we beat back one of the most powerful and wealthiest politicians in the country, protecting thousands of jobs and public services. For now, Tennessee will not be for sale.

Related
School and Campus Workers Say: Not Until It's Safe »
Graduate Employees at University of Michigan Strike over COVID, Police »
We Reinvigorated Our Undergrad Union… Just in Time for COVID Fights »
Call Center Workers Strike for Telework in Portugal »
Film Review: Nothing But a Man »

Tennessee Campus Workers Foil Billionaire Governor's Outsourcing Scheme Two years ago Tennessee’s billionaire governor Bill Haslam, then the richest elected politician in the country (now it’s Trump), quietly initiated the largest and most radical restructuring of public services in the state’s history. His plan was designed in secret and written as an executive action, deliberately excluding legislators and the public. It would outsource every one of the state’s t...