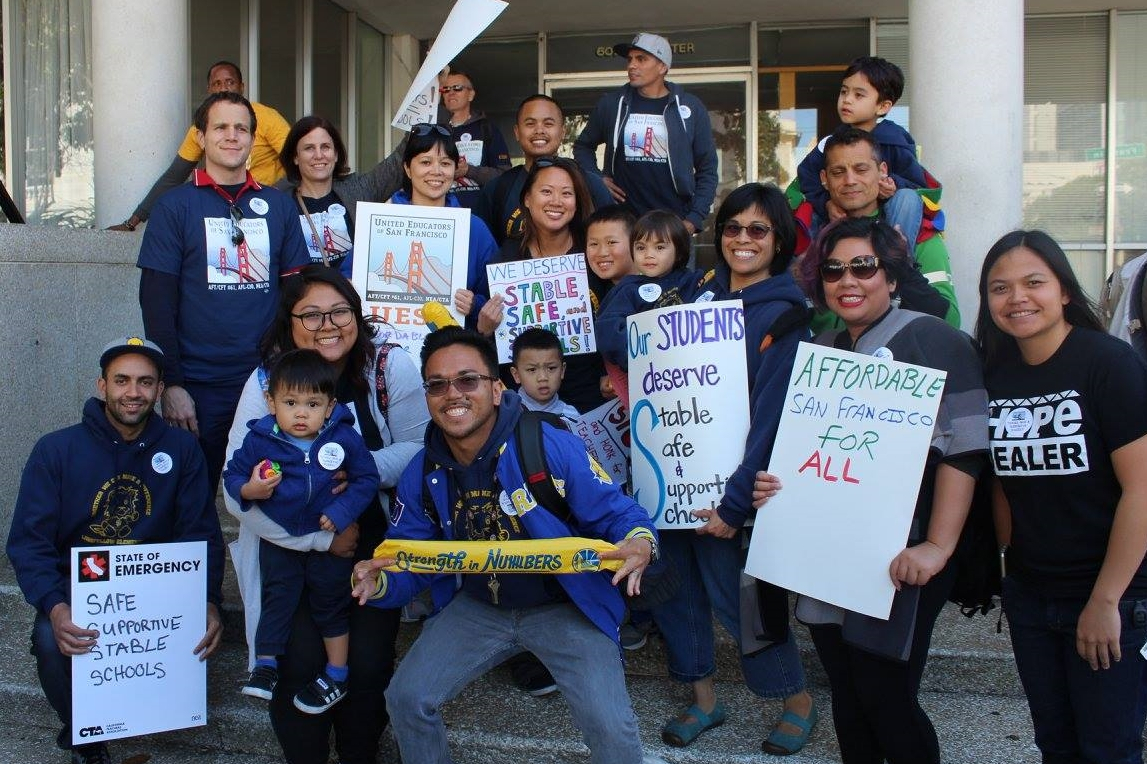 San Francisco teachers rallied at their school board for Safe, Stable, and Supportive Schools. Photo: United Educators of San Francisco

Two kindergarteners are poking each other with their pencils. What starts as a game soon gets out of hand. With one child bleeding, the teacher brings them to the principal’s office. Later, she finds out both kids were suspended and sent home.

It’s not an uncommon scenario in today’s public schools. But as activists draw attention to high rates of suspensions, racial disparities, and the “school-to-prison pipeline,” the political winds are shifting. Policymakers at the federal and district levels have begun to demand fewer suspensions, especially for minor rule-breaking.

It’s an issue where not all teachers see eye to eye. But a growing number of teachers and unions are rising to the challenge, pushing their school districts to back up suspension bans with the resources to make alternatives really work.

The idea is that teachers and students meet to discuss the behavior and the root problems that might cause students to act out—such as stress, anxiety, or problems at home.

For instance, suppose a student yells and curses at a teacher in the hallway. Instead of removing the student from his next class or sending him home, the teacher would sit down with him. Both would explain their experiences of the incident. Often a parent or even a peer student joins the meeting, too.

Pushed Out of School

The stats are alarming. More than 3 million students are suspended each year, says the Department of Education. Black students are three times as likely to be suspended as the general school population.

African American children are fewer than 20 percent of pre-K students, but receive half of all pre-K suspensions. Among male students of color with disabilities, nearly 1 in 4 receives an out-of-school suspension.

The consequences for suspended students can range from falling behind in schoolwork to far worse. A study of Texas students by the Council of State Governments found that students who got suspended were more likely to be held back, drop out of school, and get caught up in the juvenile justice system.

But if you’re going to ban suspensions, teachers say, you have to offer an alternative path. Classroom management has only gotten harder as class sizes grow and the ranks of school counselors and nurses shrink.

To deal with a disruptive student, teachers often have to stop class. Removing a student is sometimes the only obvious way to resolve the issue and get everyone else back on task. The emphasis on test prep and high-stakes benchmarks only increases the pressure.

Teachers don’t have the final say on suspensions—administrators decide what to do with students who’ve been removed from class. But teachers do have authority in the chain of actions that ends up pushing students out of school.

This new approach requires a culture change. But in her experience, Eisen-Markowitz says, it’s more effective than punitive discipline.

“So rarely I’ve seen a suspension work, where a student returns feeling ready to learn,” she said. “I personally feel safer knowing I’ve had a face-to-face conversation, rather than [just] seeing them in the hall again and again.”

Eisen-Markowitz is pleased that New York has moved to limit suspensions for behavior issues and explore restorative practices—though she’s already questioning the city’s rollout. She stresses that teachers must have a say in planning and implementing a restorative practices program. It can’t be outsourced or dropped from headquarters.

Besides being a building rep (shop steward) for her union, Eisen-Markowitz organizes with the activist group Teachers Unite, a network of educators who are using and promoting restorative practices. Teachers Unite discourages outsourcing the topic to specialist trainers, who won’t be able to build relationships or stick around long-term.

New York’s United Federation of Teachers—the largest teacher local in the U.S., with 100,000 members—hasn’t been so welcoming. “The UFT has centered the conversation on teachers’ need to kick students out,” Eisen-Markowitz said.

Another teacher group, the Movement of Rank-and-File Educators—modeled after the caucus that leads the Chicago Teachers Union—ran for top offices in the local, with a platform that includes reforming student discipline and taking on racial justice issues.

‘CART BEFORE THE HORSE’

African American students, though only 15 percent of the elementary school population in Seattle, were receiving nearly half the suspensions.

But Seattle special education teacher Shelly Hurley believes her district “put the cart before the horse” by curbing suspensions without adding other support for teachers.

The policy change “looks great” on paper, she said. “Suspensions are going down—but that doesn’t mean learning is going up.”

Seattle teachers, meanwhile, are working to build long-term alliances with parents and community groups. In last year’s negotiations, the union brought up the problem of racially biased suspensions.

At first, Hurley said, “we wanted hours and hours of professional development.” But eventually, “we came to realize we wanted it to be something more organic that grew at every school.”

Seattle teachers don’t see this issue as isolated. They also fought for guaranteed recess, less testing, and much-needed raises. In September, they went on strike.

Their final contract settlement created racial equity teams at 30 schools to examine how discipline affects kids of color. There’s also a citywide behavioral support team of five staff. After a school year with the changes, a union-management committee will make recommendations to the school board.

Where the rubber hits the road is whether a rule-change is backed up with the necessary resources. “It’s going to cost money,” Hurley said. “There’s no way around it.”

San Francisco teachers saw this firsthand. They were on board from the start with their district’s “Safe and Supportive Schools” initiative, which called for scaling back suspensions, introducing restorative practices, and hiring coaches to train teachers.

But two years after implementation, the district has dismantled the team of coaches and is scaling back the resources to run the programs.

“You can’t just say it in name only,” said Lita Blanc, president of United Educators of San Francisco.

To fully realize the initiative, the union has responded with its own set of demands: a teacher’s aide in every class, and in every school, a parent engagement plan and an alternative learning center, staffed with a school employee—so students who’ve been removed from class aren’t just warehoused in an office.

Five hundred teachers rallied at the school board in May for “Safe, Stable, and Supportive Schools,” sending the message that it takes long-term resources to transform school climate. They want language addressing these demands in their next contract.

Teachers in St. Paul, Chicago, and elsewhere are also linking these worksite issues to bigger social and political demands, like supporting the Fight for $15 and stopping banks from foreclosing on families. After all, students bring those problems to school, too.

Training is a big part of bringing restorative practices into classrooms. But St. Paul Federation of Teachers Vice President Nick Faber said unions must not lose sight of the need for ongoing staffing too. “Teachers are so on overload of initiatives, they can’t keep them straight,” he said.

In recent bargaining, St. Paul teachers won expanded school-climate improvement teams, which include parents. Each school’s team can apply for a $150,000 grant for restorative practices, using the money for additional staff or training as the local committee sees fit. Six schools are now in the process of creating their own plans.