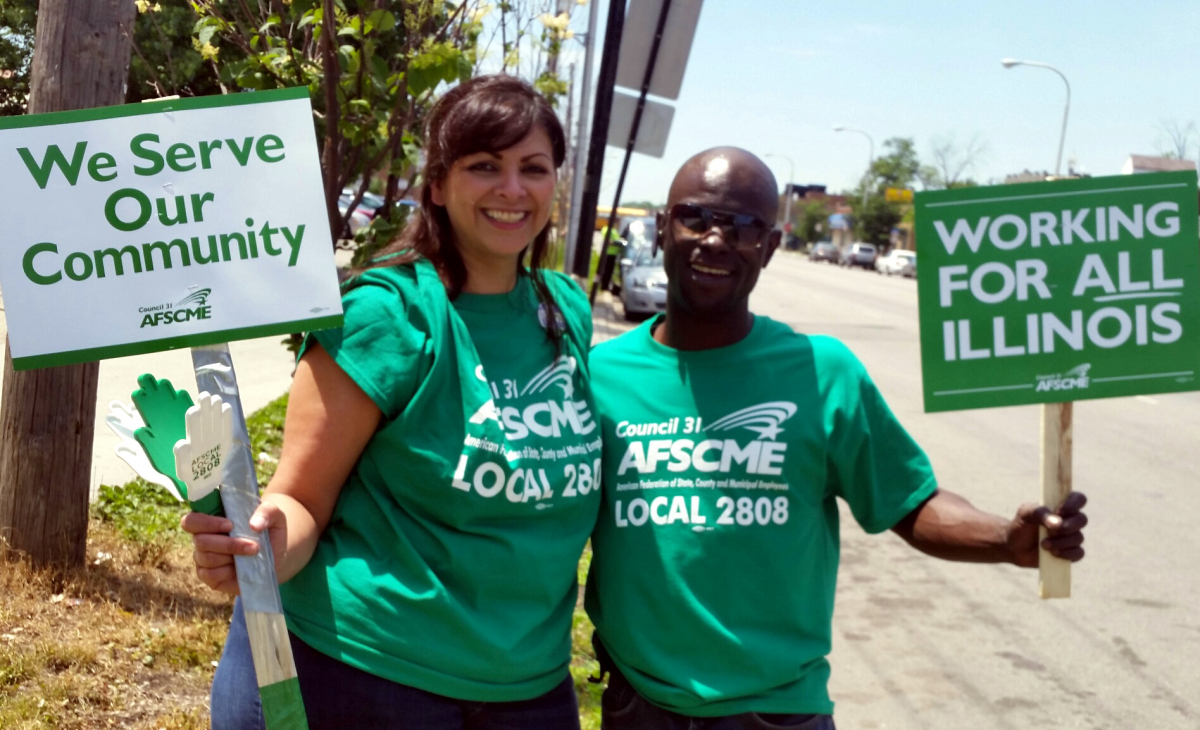 Though the Supreme Court saved the Affordable Care Act again, and protected same sex couples' right to marry, the nine judges ended their term by opting to hear the case that public sector unions have been trying to make go away: Friedrichs v California Teachers Association. Photo: AFSCME Council 31

UPDATE, JUNE 30—Though the Supreme Court saved the Affordable Care Act again, and protected same sex couples' right to marry, the nine judges ended their term by opting to hear the case that public sector unions have been trying to make go away: Friedrichs v. California Teachers Association.

The court could decide the case as soon as a year from now.

JUNE 24—In late June the Supreme Court will decide whether to hear a lawsuit, Friedrichs v. California Teachers Association, that could make the whole public sector “right to work.”

The court would determine whether public sector unions could continue to collect so-called “fair share” or “agency” fees.

If CTA loses, public employees across the country could opt out of membership and pay nothing for the union protections they enjoy. Union budgets—and strength—would be further diminished.

Public sector unions are playing defense. They need a plan to convince employees to join (or stay in) the union. But they’re operating in a difficult terrain, after years of cuts and concessions.

“There’s been a loss of confidence,” said Vice President Daniel Barnhart of United Teachers Los Angeles. “When you are in a crouch, it’s harder for people to see a fighting union.”

When a union and employer agree to an “agency” shop, even nonmembers covered by the contract are required to pay a fee to the union.

The idea is that everyone must pay their “fair share” of representation expenses, since the union is required by law to represent everyone in grievances.

Opponents have continually argued that public sector unions are political in nature, because their employers are the government, and that dues going to politics violates employees’ right to abstain from political activity.

But the court ruled that an individual’s right to belong or not belong to an organization had to be weighed against the threat to labor peace if “free riders” got the benefits of a contract without contributing.

But in two recent rulings, Harris v. Quinn and Knox v. SEIU, the court’s conservative majority were willing to chip away at this precedent and indicated they are open to overturning Abood with the right case.

To prepare for the worst, the big public sector unions are setting out to bolster their membership numbers. The American Federation of Teachers, National Education Association, AFSCME, and Service Employees (SEIU) nationally are doing large drives to convert fee-payers to members.

Will that be enough to convince union skeptics to stay members for the long haul?

In an agency shop, it’s often possible to make a pragmatic pitch for people to join the union: You’re already paying most of the cost of dues anyway. Pay just a little more, and you can be a full, voting member.

But signing up union members could get a lot harder if the alternative is a free ride.

The elephant in the room is that plenty of represented workers aren’t enthusiastic about their unions. Some see them as the contract, pure and simple—an insurance policy at best, not something that gets your blood moving. Others have the opposite gripe—that their unions focus on advocating for causes far removed from members’ day-to-day work.

Either way, too few unions are engaging members in the kinds of fights that generate passionate unionists—and fewer still have members in the drivers seat, shaping their own programs.

“If right to work happened, it would definitely be devastating. A lot of unions would take a hit,” said SEIU Local 1021 executive board member Ramses Teon-Nichols. “Not only a financial hit, but also a morale hit by having membership go down.”

Since Wisconsin’s 2010 public sector right-to-work law (it also barred dues deduction and limited the scope of negotiations), AFSCME has lost two-thirds percent of its members—dropping from over 60,000 to 20,000. The Wisconsin Education Association Council has lost 30 percent.

In California, where this court case originates, the threat isn’t new. Conservatives there have tried for two decades to strip unions of dues deduction and fair share through ballot initiatives.

But what anti-union forces couldn’t win at the ballot box, they might get through courts.

“It’s all part of the same game,” said CTA President-elect Eric Heins. “It’s getting unions out of the way, because we are one of the few organizations to stop [conservatives’] agenda.”

To prepare for the attacks, last year the union rolled out a plan to build an organizing culture in its locals. This means connecting with members and non-members about issues that matter to educators, like the Common Core curriculum standards.

At United Teachers Los Angeles, the largest CTA affiliate, union leaders are looking down the road.

“It’s not a secret that we’ve been in decline, with the loss of [student] enrollment and loss of membership,” said Vice President Daniel Barnhart. The union spent years in hibernation and weathered a slow climb out of the recession.

Yet after members elected a reform administration to head the union last year, UTLA drew fresh rank-and-file energy into its contract campaign, culminating in a 15,000-person rally downtown. The union won a new agreement in April that features its first-ever language on class size.

“The way to survive a potential Friedrichs setback is the same as what’s needed to win a contract campaign,” Barnhart says.

The new leaders have taken a systematic approach to strengthening UTLA. The steps are familiar to any organizer: Compile an up-to-date list. Identify leaders in each work area. Train them to talk with co-workers about getting involved.

“We take lessons from our own past. We didn’t always have agency fee,” Barnhart said—just since 1992. “Our foremothers and fathers who built this union didn’t have it.”

SEIU, which has a million members in the public sector, is also grappling to prepare for the worst. It’s touted home care organizing victories as its biggest growth area—but it already lost fair share in that sector in last year’s Supreme Court ruling, Harris v. Quinn.

This is a union that’s shifted much of its spending away from representation to fund new organizing, the Fight for 15, and its campaign for immigration reform. Now it has to make the case for those priorities to members.

To keep the union relevant, SEIU 1021, a merged public sector local in northern California, is prioritizing campaigns to raise the minimum wage, alongside strengthening the union in worksites, said Teon-Nichols.

Since electing reform-minded leaders in 2010, Local 1021 has focused on what it calls chapter rebuilds.

“We put tremendous effort into shops, to rebuild stewards councils, chapters, and structures,” Teon-Nichols said. “We are really starting to develop more of an organizing model. We see that there is more value in having people organizing themselves.”

Teon-Nichols added that the inspiring Fight for 15 has helped energize some of the union’s activists—so much so, that he sees it as essential to the union’s internal organizing efforts.

It’s relevant even for members who already make more than $15, he points out. After all, higher wages put money back into the economy, raising revenue for the public sector.

In Illinois, AFSCME Council 31’s fight against billionaire Governor Bruce Rauner is helping the union gear up for the possible loss of fair share nationally.

Thus far, working in coalition, AFSCME, SEIU Healthcare Illinois, the Chicago Teachers Union, and other public unions together have so far beaten back Rauner’s attempts to pass right to work and eliminate fair share on the state level. Public workers have also so far protected their pensions.

Now, Council 31’s state workers are in tough contract negotiations, where Rauner is demanding a wage freeze and benefit cuts. The council fears he’s trying to push them to strike.

In fact, Rauner’s attack on Illinois’s fair share law has helped the union sign up new members, said Council 31 Deputy Director Mike Newman—because workers can see how the governor’s attempts to weaken the union go hand in hand with his demands for concessions.

AFSCME has a reputation for focusing on traditional representation, closed-door bargaining, and legislative maneuvering. But two years ago, Council 31 built to a credible strike threat against a Democratic governor through old-fashioned union-building: charting out workplaces, assessing members’ readiness.

The council uses AFSCME’s model of Member Action Teams to organize in worksites. The goal is to have one MAT leader for every 10 workers. Besides signing up fair share members, they do day-to-day check ins and turn out co-workers for events.

“What we are doing is consistent with [AFSCME’s] goals,” said Newman. But “there’s an intensity here that is probably not at the same level with most parts of the country.”

Her 20,000-member local led a 2013 fight against concessions, with multiple strikes at University of California campuses and affiliated hospitals.

It’s those MAT leaders who make the union strong. “They are driving the workplace fights, defense of the contract, and identifying other leaders of the union,” Lybarger said. They’re also tasked with signing up non-members.

Lybarger credits AFSCME’s national leaders for recognizing that unions need to invite members to join a bigger struggle on issues they care about—not just pay into the union like an insurance plan.

So the local is gearing up for a member “recommitment drive,” like an organizing drive when workers first join the union by signing a card.

“Whether a new member or current member,” Lybarger said, “Everyone is going to sign a commitment card… Commit to this because your pension is on the ropes, or the boss is coming for your job.

“Whatever happens—with UC or the Supreme Court—we are building a structure that will hold fast through the attacks."

A version of this article appeared in Labor Notes #436, July 2015. Don't miss an issue, subscribe today.