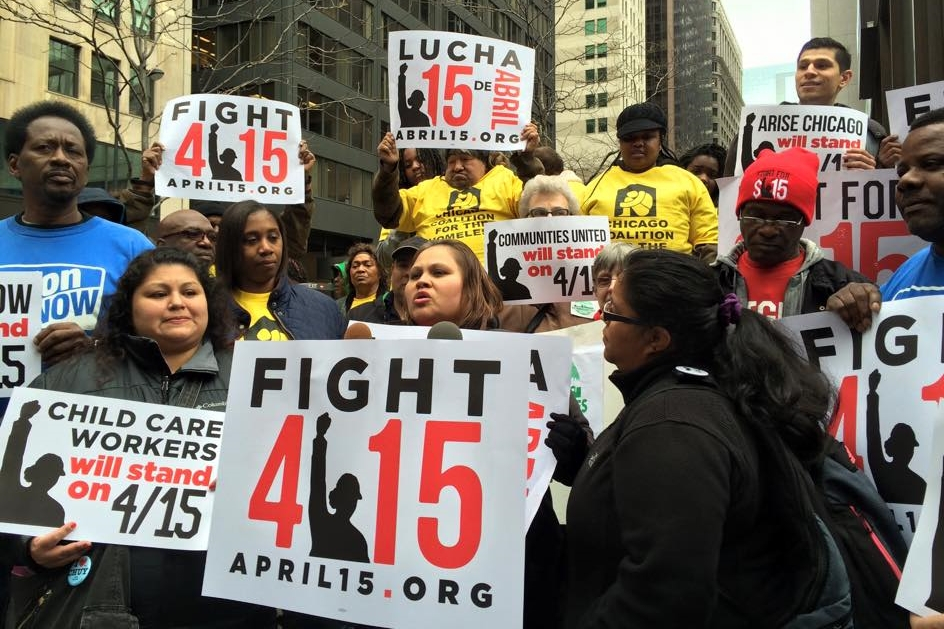 Workers march to a McDonald's restaurant in Minneapolis calling for $15/hour minimum wage, paid sick days, and fairer scheduling of work hours on A

Below: A photo gallery of Fight for 15 actions from around North America

As thousands of low-wage workers prepare to rally and strike on April 15, demanding $15 an hour and a union, their high-profile mobilization has already inspired workers in a range of industries far beyond fast food.

Temporary workers at the Metro regional government in Portland, Oregon, won major wage increases in their first contract after AFSCME Local 3580 partnered with 15 Now Portland and Jobs with Justice.

While these jobs are considered temporary and seasonal, some workers have been doing them for 20 years. The union argued that this “perma-temp” system lowered wages for all workers, and pushed for temporary workers to be paid 80 percent of full-time colleagues' wage.

Fast food and retail workers will be joined on April 15 by childcare workers, adjunct professors, home care workers, airport workers, and students in one-day strikes in 200 cities, as part of the Service Employees-backed Fight for 15 movement.

Many actions will target McDonald’s. Workers dismissed the company's recent announcement of a $1 pay raise as a publicity stunt, pointing out that nearly all McDonald’s workers will still be paid less than $10 an hour. The raise does not apply to the 90 percent of workers employed at franchises.

Ross Grami, AFSCME Council 75 representative, says the community pressure from allies was a critical factor in their win, with 15 Now and Jobs with Justice joining AFSCME at the bargaining table on the last day.

“I don’t think I could have sat at the table five years ago and demanded an employer pay a living wage of $15. Most employers would have laughed at us and laughed at our bargaining unit,” said Grami. “The organizing workers are doing nationally and the sacrificing they have had to do has changed the conversation and changed perceptions around the table.”

Tim Combs, a temporary hazardous waste worker who joined the bargaining team, describes the 30 percent raise as a game-changer and says other groups of temps are now approaching AFSCME to organize, too.

Leaders of the Chicago Teachers Union announced in late March that, as part of upcoming contract talks, they will seek a minimum of $15 for all school employees and subcontractors, both CTU members and others.

The spillover effect of Fight for 15 organizing is not confined to public sector workers. Teamsters Local 804, which represents UPS workers in New York City, is joining the mobilization for a $15 city minimum wage.

The national UPS contract sets the starting rate for part-timers at $10, and many make less than $15.

“I made close to $10 when I started 30 years ago, and the minimum wage [then] was around $2.75, so as part-timers we were doing good,” said Local 804 steward Greg Welch. “Somehow the company managed all these years to hold the part-timers at this wage—it’s like time stood still. To me, to see that only as of last year, part-timers were starting at $10, it's crazy.”

Local 804 members will hold actions at UPS hubs throughout New York City on April 15 before joining a citywide demonstration later in the day.

Meanwhile, nursing home workers in Connecticut voted to strike for better wages and sent strike notices to 27 nursing homes last week. The workers, members of Service Employees (SEIU) 1199 NE, adopted a $15 minimum wage demand in statewide negotiations in January. Over half make less than $15. (The strike was postponed at the governor’s request.)

The Fight for 15 is also spreading north of the border. Although minimum wages in Canada are higher than in the U.S.—ranging from $10.20 in Alberta to $11 in Ontario—they still remain below the official poverty line.

In Ontario, the minimum was frozen at $10.25 for four years. Inspired by the momentum generated by the Fight for 15 in the U.S., in March 2013 unions and community groups launched a campaign that bumped the provincial minimum to $11 in 2014, with annual cost-of-living increases. On April 15 the campaign will launch a new Ontario-wide campaign for $15 and Fairness, adding demands for paid sick days and adequate and regular hours.

Workers and allies will be rallying April 15 outside McDonald’s headquarters and at the Ontario Ministry of Labour in Toronto. Pickets are planned in 12 other communities, including at McDonald’s in Hamilton, Thunder Bay, London, and Peterborough.

Workers at the Toronto airport will be launching a campaign on the same day for a $15 minimum wage and better job security and working conditions. Although a little over half the 40,000 airport workers are unionized, contract flipping between service providers results in low wages and precarious work for both union and non-union workers.

“You have workers doing a job for 12 to 15 years still at minimum wage—every time they get a raise, someone else comes in and undercuts the bid and the workers start over at minimum wage,” explains Sean Smith, mobilizing coordinator at Unifor Local 2002, and a representative of the Toronto Airport Workers Council that is bringing together union and non-union workers.

“There has to be some sort of acknowledgment of the people who run the airport for you—that are there are every day, making sure it’s clean, making sure the passengers are taken care of,” said Phillipe Buckland, an Air Canada customer service agent and Unifor local officer. “People can’t afford to live like this.”

Last year the airport workers council went to Seattle to meet with hospitality and transportation workers who had won a $15 minimum wage at the Seattle-Tacoma airport in 2013. The $15 minimum was struck down after a legal challenge by employers, but an appeal is pending before the Washington Supreme Court. Smith describes the cross-pollination with U.S. movements: “Fight for 15 in a lot of jurisdictions started in the airports. It’s important to tie our movement with other movements happening across the continent.”

Nova Scotia and British Columbia are also seeing campaigns for a provincial $15 minimum. In B.C., the Federation of Labour is leading the fight, and is planning actions outside low-wage employers on April 15, including leafleting outside a McDonald’s training center.

The B.C. government recently announced that in September it will increase the minimum wage 20 cents, to $10.45. Jim Chorostecki, executive director of the BCFED, says if anything this meager increase has given the campaign new momentum.

The national mobilization around low wages has also pushed the New Democratic Party, the official federal opposition party, to announce a $15 federal minimum wage as a major plank of its election platform.

Pam Frache, an organizer with the Workers’ Action Centre, describes the significance of the NDP announcement: “I don’t think it would have happened if it were not for the success of the Ontario campaign and developments in the U.S. that really built people’s confidence,” she said. “It makes it a pan-Canadian conversation in an unprecedented way and builds the strength of movements on the ground fighting for 15.”

The momentum generated since the first fast food strikes in November 2012 is making unions rethink strategies for raising pay for low-wage workers, both union and non-union.

“There are still unionized workers who make less than $15,” said Chorostecki. “The more we have a minimum wage campaign, the more it assists them to bargain effectively to get good wages.”

That’s exactly what Combs hopes will happen with the temporary workers’ victory in Portland. He will be speaking at a Portland Fight for 15 rally on April 15 and wants to encourage other workers to raise their expectations: “I’m going to let people know: Look, you can get this, you don’t have to be part of a union necessarily. The movement is bigger than the union.”

Sonia Singh is a staff writer and organizer with Labor Notes.sonia@labornotes.org
Related
Southern Service Workers Launch a New Union »
How We Turned the Tables On Starbucks Union-Busters »
Viewpoint: New York’s New Law Covering 67,000 Fast Food Workers Is a Leap Forward for Just Cause for All »
Ballot Measures: Mixed Results for Workers »
Keep the Cops Out of Our Shop, Seattle Bookstore Workers Propose »