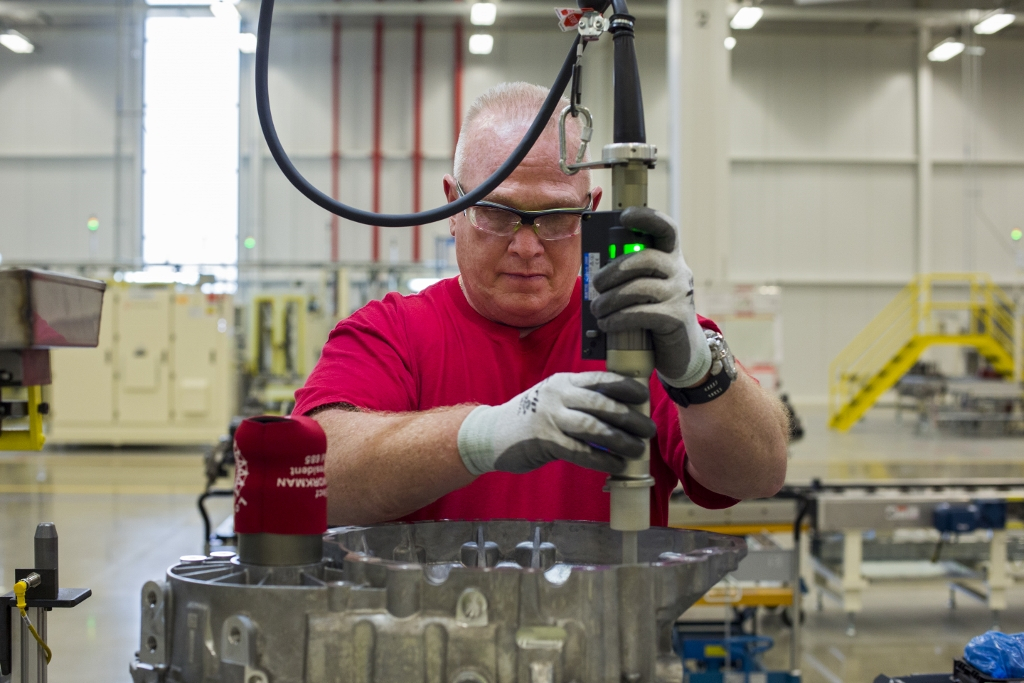 In its bid to become the world's largest auto manufacturer, VW is trying to out-Toyota Toyota. Its Chattanooga plant provides a window into the state of the art of the brutal productivity-maximizing "lean management" schemes. Above, a worker at a Chrysler transmission plant in Tipton, Indiana. Photo: Jim West/jimwestphoto.com.

Amanda (not her real name) was hired fresh out of high school to work on the Volkswagen assembly line. But after two years in the Chattanooga plant, she had to go on leave to protect her health.

“I had a boss who would yell at me every day until I cried,” she said. “I talked to H.R. about it. They would not help me at all. They would not bring witnesses in even though I had witnesses, and I kept a notebook and they wouldn’t look at the notebook.”

Amanda says her floor supervisor, a former Toyota group leader, publicly humiliated her until she finally broke down. “One day while he was yelling at me, I told him that I am going to kill myself if you keep talking to me like this. He sent me to the medical bay. The medical bay put me on short-term disability.

“I saw a therapist who said I was fine as long as I was moved to another line. The Volkswagen doctor refused to clear me.” Amanda never returned to work at VW, believing it easier to find another job than to fight the company.

Her story is no anomaly. It shows the system is working as intended.

Company documents show VW’s management method is modeled on “lean production,” the philosophy created at Toyota, then popularized across the auto industry and beyond.

In fact, VW is trying to out-Toyota Toyota. The German company aims to overtake its Japanese competitor and become the world’s most profitable automobile manufacturer by 2018.

So the Chattanooga plant provides a window into the state of the art of brutal productivity-maximizing management schemes.

The Toyota method of squeezing workers quickly spread. Check out our recent coverage of how management is applying the screws in other industries:

Fed up? Labor Notes’ book Working Smart offers a thorough analysis of lean and how to fight it.

One of VW’s core lean tactics is “workforce flexibility”: competitive pressure from temps or part-timers.

At the Chattanooga plant, permanent employees work alongside “temporary” workers, some of whom have actually worked there for years. Pitted against one another, both groups fear to speak up.

Workers are routinely pushed to their physical and emotional breaking points. From management’s point of view, this maximizes productivity.

“Every employee there busts their ass and is injured and is working through the pain because they don’t want their job taken by a temp,” Amanda says. “It is made clear to all of us that we are easy to replace.”

That’s lean production in a nutshell: ruthless efficiency, produced by a system of efficient ruthlessness. Workers are deliberately stretched to their limits, by a combination of competitive pressure, inadequate training, repetitive stress, and rotating shifts—so that the weakest links can be identified and eliminated.

Another central component is the “team model.” Plant workers are grouped into teams of six and expected to work with management to continually find new ways to increase their team’s productivity. The “team” aspect encourages peer pressure.

It’s a never-ending loop. If you break down from stress, you’re out the door—but if no one on your team is breaking down, then the team’s load should be increased, for instance by removing a worker.

All the pressure to boost production means safety and training get short shrift. Much of the onsite training falls informally to team leaders or other assembly line workers—already overburdened by their own workloads.

“Assembly line work is very nuanced and complicated,” said one VW team leader I spoke with. “It has to be practiced to be understood.” When a worker who hasn’t been properly trained is pushed to pick up the pace, the results can be catastrophic.

That’s what Amanda believes happened when a friend on her line had two fingers ripped off while installing a seatbelt with a torque gun.

Big Box Scheduling Leaves Workers Exhausted and Broke: “Black Friday at my store was a joke!” wrote a Walmart worker. “We’ve been getting two trucks a day and still don’t have enough unloaders. We are all bone tired…”

New Eight-Hour Day Fight Erupts in Auto: Like Volkswagen, Chrysler imposed a schedule that had workers alternating between day shifts one week and evening shifts the next. Plant workers weren’t happy.

STRESS ON THE BODY

The danger is compounded by constant fatigue, due to rotating weekly shifts.

Chattanooga assembly line workers are required to work 10-hour shifts, four days a week: 6 a.m. to 4:45 p.m. one week, then 6 p.m. to 4:45 a.m. the next. Multiple workers told me this is the top work-related issue in the plant.

“It was a big reason why I quit,” said Lauren Feinauer. “I spent three years being tired. Never feeling rested. I was having mental health issues, gaining weight, having digestive problems.” Workers described having to take sleep aids routinely, and never feeling like their bodies could adequately heal from the stress.

But the resulting rate of injury is hard to determine, because VW has its own private medical clinic and emergency response team inside the Chattanooga factory. While the company presents in-house medical access as a perk of employment, some workers see it as another level of control.

Workers are required to report their pain levels every shift when entering and leaving the factory. Health contractors walk the line and interview employees about work-related soreness and injuries.

“They are definitely there to control the situation,” said Feinauer. “I felt that as soon as I reported an injury and they came to talk to me, that they were fishing into my past to find a way to blame it on me. They asked as much about jobs I did in the past as they did about what I am doing on the line.”

The pressure is only likely to get worse as VW workers are subjected to an increasingly globalized form of lean production.

In July the company announced plans to expand its Chattanooga factory to produce a new sport utility vehicle for the North American market. With the plant expansion will come the introduction of the modular transverse toolkit, or “MQB platform.”

The MQB platform will standardize key sections of VW cars, allowing workers to manufacture diverse models in the same factory. The result is that any plant in VW’s global network could manufacture models from any of the Volkswagen Group’s 12 brands. Assembly lines could even be rapidly switched from car to car, in “just-in-time” fashion.

This will create competitive pressure among all the VW assembly lines in the world—including a recently opened plant in China.

No wonder the company predicts the new system will increase worker “efficiency” and “flexibility.”

Like many of her former co-workers, Amanda supported the United Auto Workers organizing efforts in Chattanooga last year because she believed unionizing would improve working conditions. “If we had had a union, [what happened to me] would never have happened,” she said.

UAW Local 42, a minority union, has recently been meeting with management under VW’s new “Community Organization Engagement” policy. Workers report that nothing has changed so far, but some are openly calling for direct action over the rotating shift schedules.

“It is imperative,” one member told me, “that we take action as a unit of workers to change our shift model to something that is much healthier for the workforce and will lead to a much higher likelihood of long-term employment at VW.”

Chris Brooks is a graduate student in the Labor Studies program at the University of Massachusetts, Amherst, and an organizer living in Chattanooga.

If your article accurately describes the methods being used by VW, then they have not really implemented Lean. One of the basic tenets of Lean is that the workplace must provide a environment of safety for the employee. Not only physical safety, but a sense of emotional safety as well. Pressuring and bullying employees is not acceptable in a well functioning Lean organization.