Vermont Governor Backs Away from Health Care for All 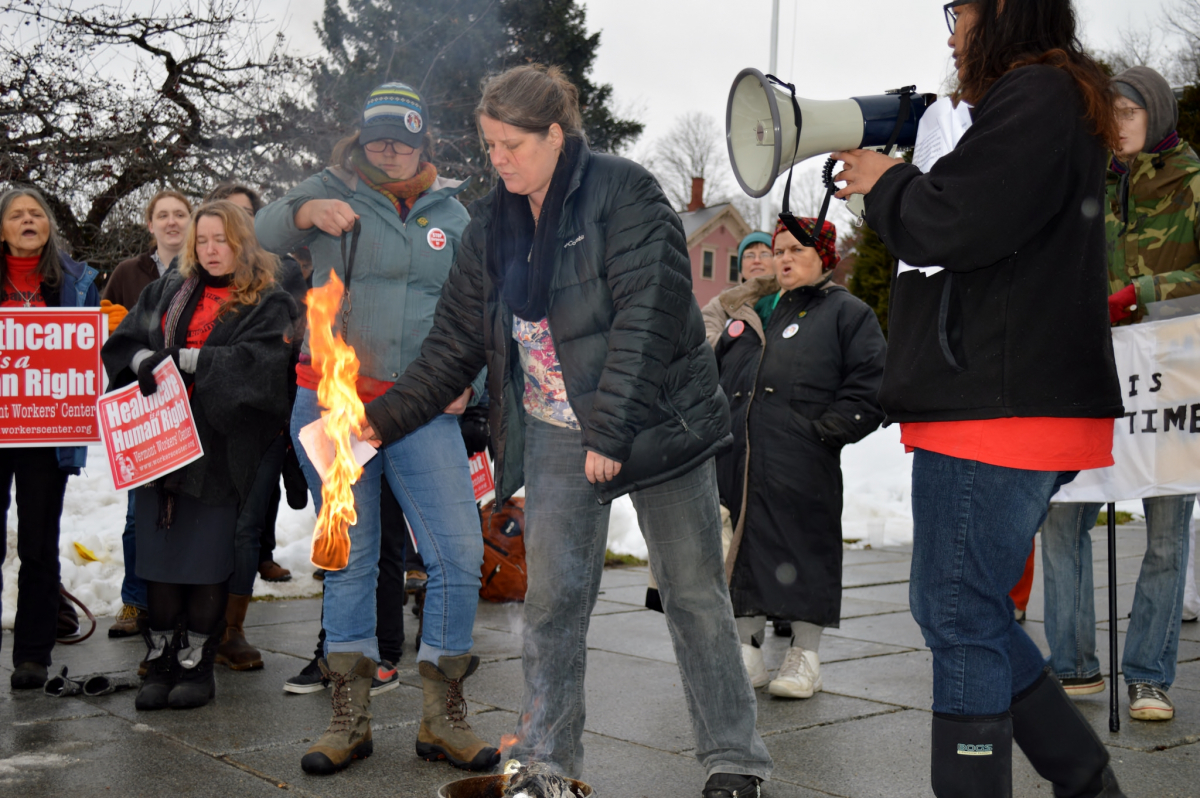 Supporters of health care as a human right burned their medical bills in Montpelier on Thursday, and confronted the governor on his decision not to recommend financing for their health care law. Photo: Vermont Workers Center.

Vermont Governor Peter Shumlin announced Wednesday that he was suspending his efforts to implement Green Mountain Care, the 2011 law that makes health care a right for every Vermonter.

Yesterday, supporters of the Vermont Workers Center and other union members marched through the streets of the state capitol, burning their health care bills and confronting Shumlin in the statehouse. They chanted, “If we burn, you will burn with us.”

Shumlin had been scheduled to submit a financing proposal and plan design to the state legislature when it convenes in January. A final plan would then have been submitted to the federal government for approval under state waivers available beginning in 2017 through the Affordable Care Act.

Shumlin claimed that after reviewing new cost estimates, it “was just not affordable.” The plan he considered is similar to one covering state employees and pays approximately 94% of total health care costs.

“Pushing for single payer health care when the time isn’t right and it might hurt our economy would not be good for Vermont,” he added.

The cost estimates were greater than originally anticipated because of slower than expected economic growth, a projected cost of $200 million per year to provide for cross-border commuter coverage, increased Medicaid costs and an estimated $150 million decrease in the amount of federal funding available for the transition.

According to the Governor, the new cost estimates would have required an employer-paid payroll tax of 11.5% and a progressive income tax maxing out at a marginal rate of 9.5% for family incomes in excess of $102,000.

Shumlin said he would continue to pursue a series of incremental changes in the state health care system to promote quality, cost containment and efficiency. “If we do these things, we will achieve a significant and meaningful part of the goal we set out for ourselves.”

“The new estimated costs for a comprehensive health care plan that would cover all Vermonters that were released yesterday are between $100 and $300 million more than earlier projected by both the Hsiao-Gruber commission and me,” said Friedman. “It is not clear that these new estimates fully account for administrative savings. The Governor is abandoning Vermont’s single-payer plan because it is slightly more expensive than expected.”

In the November election, Shumlin, a Democrat, won a bare plurality of the votes. The Vermont Progressive Party, which has five elected state representatives and three state senators, chose not to run a candidate, largely because of Shumlin’s support for Green Mountain Care. His Republican opponent charged at that time that single-payer was “dead” and that Shumlin was “going to wait until after the election to tell you.”

After the election, Shumlin reassured single-payer advocates that he was still on track to release a financing report in time for the legislature to act in January. Reaction from state health care justice activists to his December 17 announcement ranged from disappointment to outrage.

“I’m trying to figure out how we can move forward, and I hope that my legislative colleagues are not hearing that this needs to be the end of health care reform,” said State Representative Chris Pearson, the leader of the legislature’s Progressive Caucus.

Dr. Deb Richter, the founder of Vermont Healthcare for All said, “I’ve been at this for 26 years and I knew it was a heavy lift to begin with, but I don’t think this is the death knell of single-payer. I think we’re going to have to move more slowly.”

Martha Allen, President of the Vermont teachers (NEA), reiterated the strong labor support for Green Mountain Care. “I and my fellow Vermont-NEA members …urge the Governor and Legislature to get down to business right now so that all Vermonters will understand that a publicly financed, universally available health care system is better for all of us.”

The Vermont Workers Center, which led the fight, issued a statement emphasizing that Governor Shumlin has a responsibility to enact a financing plan under the health care act. “[We] remind the Governor that health care is a human right…We all currently pay for our hodgepodge health care system. Moving to a different financing mechanism has nothing to do with raising new money…The Governor’s task at hand was to shift private payments to a more equitable public financing mechanism.”

They added that they did not believe that the governor “showed sufficient commitment to identifying alternative public financing mechanisms for a service that is already being paid for by all of us.” They pledged to keep fighting for an “equitable public financing plan for universal health care in our state.”

The Labor Campaign for Single Payer, at its national strategy conference last summer, resolved that all of labor owes a debt of solidarity to the Vermont health care justice movement.

Now labor can stand with Vermont in the fight to secure the promise of health care for all. Healthcare-NOW! has posted a petition urging the legislature to move forward with the enactment of Green Mountain Care. You can sign it here.

Mark Dudzic is national coordinator of the Labor Campaign for Single Payer.