Showdown in a Company Town 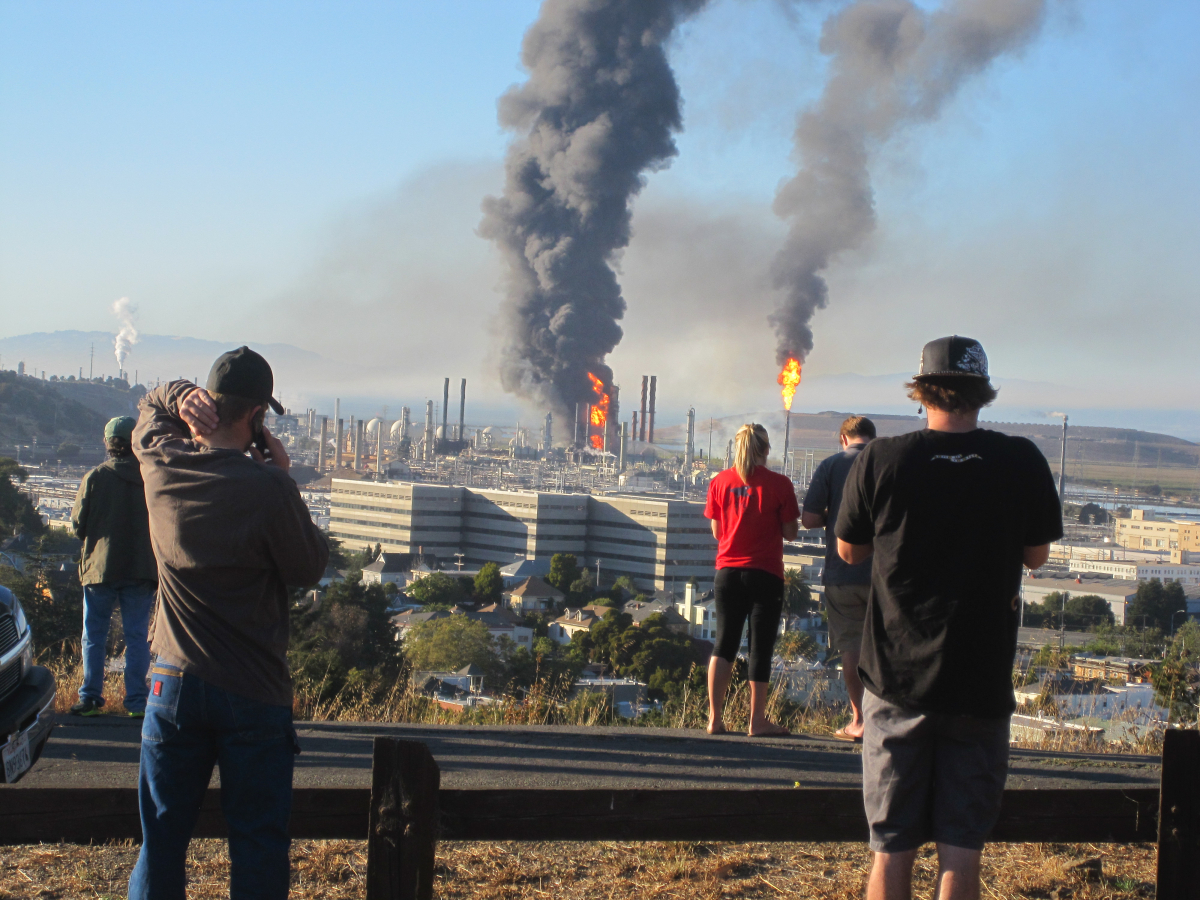 A 2012 explosion at the Chevron refinery in Richmond, California, nearly killed a dozen workers who got out just in time, and sickened 15,000 residents. Photo: Greg Kunit.

Politics in Richmond, California, have long been dominated by Chevron Corporation, which operates a 110-year-old oil refinery here, the largest in the state. In August 2012, a huge explosion and fire nearly killed a dozen Chevron workers and sent 15,000 residents to emergency rooms.

In many communities, elected officials are reluctant to buck the biggest employer in town when it misbehaves. Think of Washington state, which rushed to offer $8.7 billion to Boeing after the company threatened to shift production elsewhere.

But in Richmond, Mayor Gayle McLaughlin and the city council majority have taken a bold approach with Chevron, suing the oil giant for harming local citizens. The city rejected an offer to settle for an insulting $10 million. McLaughlin demanded that Chevron spend a bigger share of its $21 billion annual profit on fixing hazards for refinery workers and residents.

Richmond’s extraordinary mayor isn’t just the city’s good luck, though—her actions are the fruit of years of politics done differently by the Richmond Progressive Alliance. RPA’s refinery safety and clean energy campaign is one of many battles local progressives have waged since first winning city council seats in 2004.

Candidates backed by RPA have jousted with Chevron over its property taxes, air pollution, expansion plans, and low level of local hiring. The company’s total workforce, including contractors, numbers about 3,500, with Richmond residents holding only about 7 percent of those jobs.

This fall’s election will test whether Chevron’s money can buy Richmond back.

They have the advantage of partial incumbency. McLaughlin, mayor since 2006 but term-limited, is running for council. Public Employees Union member Jovanka Beckles is trying for a second council term.

Running to replace McLaughlin, with her strong backing, is Mike Parker, co-author of four Labor Notes books including Democracy Is Power. The fourth slate member is educator Eduardo Martinez.

In the neighborhoods around the refinery, RPA is making labor and environmental concerns the centerpiece of its campaign.

In the wake of the fire, RPA allies reached out to leaders of Steelworkers Local 5, which represents 600 Chevron workers, to form a “Refinery Action Collaborative.” They are pressing for the state to mandate proper refinery maintenance and reduced pollution.

On the first anniversary of the accident, the mayor welcomed 2,500 demonstrators from local and national environmental groups for a march to Chevron’s main gate. The “Summer Heat” protesters demanded “No more toxic hazards, no Keystone XL pipeline, no refining tar sands or fracked crude.”

A local labor contingent (which did not include the Steelworkers) called for a “just transition from fossil fuels to union jobs in clean energy.” The several hundred participants who engaged in civil disobedience at the plant gate were quickly released with charges dropped.

In a blue-collar city of 100,000, with nearly 20 percent residents living in poverty and a high rate of home foreclosures, one top RPA priority has been boosting the minimum wage. This month, Richmond city councilors voted 6 to 1 to give preliminary approval to raising the minimum to $9.60 next year and $12.30 by 2017. After final approval in April, this would make Richmond the third city in California and the 10th city or county in the nation to set its own minimum wage.

Another RPA goal is economic development that benefits the working class majority in Richmond—rather than banking, real estate, or energy interests. Eighty percent of the population is Latino, black, or Asian.

While public safety has improved in poor and immigrant neighborhoods, gang violence, drug-related crime, troubled public schools, and inadequate public housing remain serious problems. Among the many health hazards of life in Richmond is a high rate of childhood obesity.

In 2012, the city council put forward a referendum to tax sugary drinks to fund public health and youth sports programs. After a $2.5 million barrage by the American Beverage Association, voters rejected the soda tax 2 to 1.

Election spending by business groups that year totaled nearly $4 million—and the two RPA-backed council candidates, both of them targeted by Chevron and Big Soda, were defeated, too.

Last year, to aid thousands of homeowners with underwater mortgages, Richmond became the first city in the country to threaten to use eminent domain to avert foreclosures. The plan would enable qualified homeowners to refinance, assuming new mortgages with a greatly reduced principal corresponding to the real value of their homes.

Major banks, like Wells Fargo and Deutsche Bank, sued unsuccessfully to block the “Richmond Cares” plan. Meanwhile, Richmond residents without mortgage problems were flooded with mailings from banking and real estate interests, claiming property values and the city’s bond rating would be damaged.

Hundreds of people rallied last fall to push the city council to resist these pressures. But actually using the city’s eminent domain powers will require five council member votes, rather than just the 4-3 majority now in favor of Richmond Cares.

Two well-financed Democrats are running to replace McLaughlin as mayor. One is Nat Bates, the council’s most devoted servant of Big Oil, Big Banks, Big Soda, and the Chamber of Commerce. Corporate donations are already flowing heavily to anti-RPA candidates.

“Chevron wants to retake the city council,” Mike Parker warns. “They want to sit down and negotiate with people they have already bought and paid for. That will be the main issue in this election—whether Richmond voters want to elect representatives who owe their allegiance to Chevron or to residents of the city.”

Richmond races are non-partisan, and RPA—whose dues-paying members include Democrats, Greens, and independents—is not affiliated with any party. RPA candidates will not accept corporate funding. That sets them apart from both friends and foes on the city council, all registered Democrats.

It also puts the local progressive movement at a distinct disadvantage in the city’s never-ending “air war” of corporate-funded mailers. To combat it, RPA plans to mount its largest door-to-door canvassing operation ever.

This year, as in previous Richmond elections, unions representing police, firefighters, and building trades workers employed by Chevron contractors are lining up behind one of the two Democrats for mayor. Chevron has long cultivated ties with the local building trades council, which also locked horns with RPA over a casino project voters rejected in 2010.

Supporters of Richmond’s independent politics can donate to RPA’s “Team Richmond” at: MikeParkerForRichmond.net or by sending a check made out to “Mike Parker for Mayor” to P.O. Box 5514, Richmond, CA 94805.

Suzanne Gordon is a member of the Pacific Media Workers Guild, TNG/CWA, and of the Richmond Progressive Alliance.