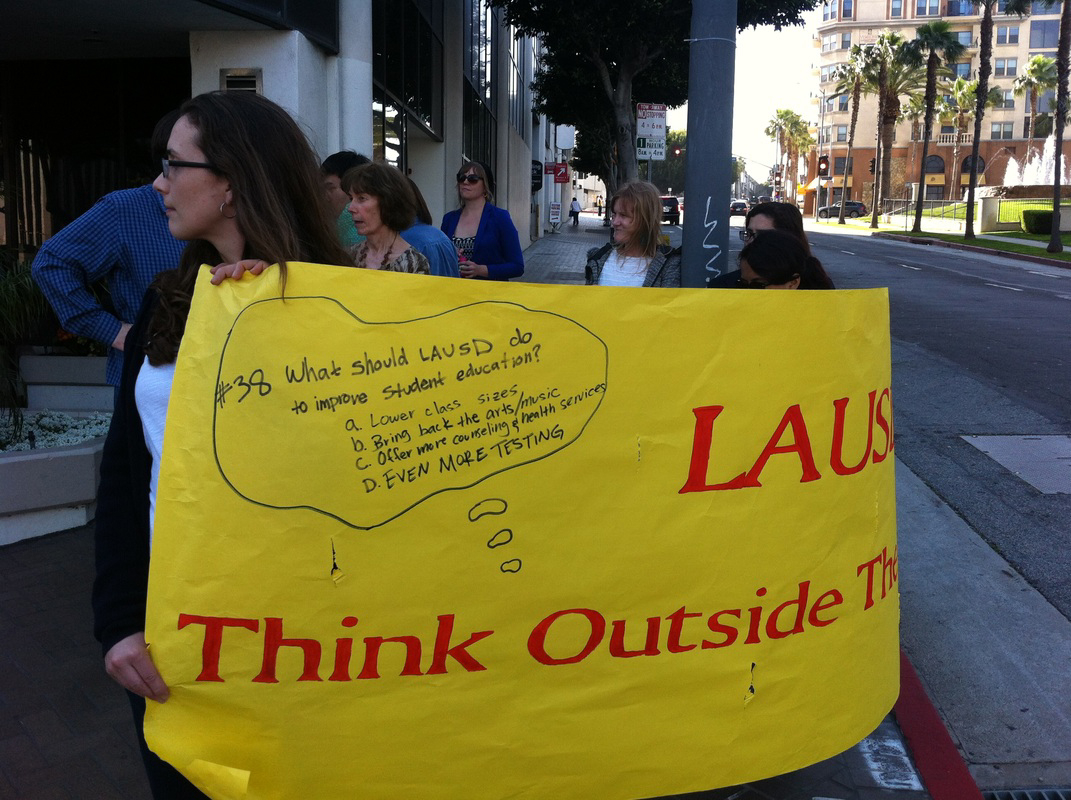 Teachers and students spoke against the school district's efforts to base 30 percent of teacher evaluations on test scores. Photo: PEAC.

An activist slate pledging to reenergize teachers to fight attacks on public schools has just won leadership of United Teachers-Los Angeles, the second-largest teachers local in the country.

Caputo-Pearl needed 50 percent to win outright, however, so he will face an April runoff against Fletcher.

Outside the top spot, the coalition won outright every spot it ran for, 24 seats. “In every area, in every position it was a big margin between the Union Power candidates and our opponents,” said teacher Rebecca Solomon, who won an executive board spot. “It’s not against one person: it’s everywhere.

“That shows the power of a coherent idea… I think people want to see a big change. People recognize that you need a big team,” she said.

The Union Power slate has spent the past three months flyering outside schools in the mornings, holding lunchtime information meetings, phonebanking, and debating opposing candidates. Caputo-Pearl was endorsed by 230 chapter chairs, the elected teacher representatives at the school level.

Union Power leaders want to turn around the widespread disengagement of the 31,000 rank-and-file teachers from their union—after years of school reorganizations, teacher layoffs, and education cuts. School district leaders are pushing charter schools and working to weaken teachers’ job security and union rights.

Solomon said the win gives her hope, but the low percentage of teachers who voted—23—also shows how much work there is to be done.

The slate members ran on their experience as education activists who’ve already been teaming up with parents to fight school reorganizations and cuts. They’re committed to using what they have learned in local school fights to take on the district as a whole.

They have a beef with Fletcher’s approach to the expired contract, which has been to bargain and sign off on contract issues piece by piece. Most recently the union agreed to a new teacher evaluation system.

“That has utterly failed,” Caputo-Pearl said. “Small-room negotiations don’t help you in terms of building power on the ground.”

Fletcher won office in 2010, after campaigning on a pledge to focus on teacher pay and benefits and promising to hire a professional negotiator to win a better contract.

This message worked in part because leaders had lost ground in their last contract—right after the 2008 economic crisis brought sweeping cuts to education. They attempted to build to a one-day strike, but were blocked by the courts. Teachers were left feeling deflated.

Today, however, the contract has been expired for two years. The union has failed to mount an aggressive contract campaign, let alone challenge district leaders’ punitive model of education or articulate its own vision.

Instead, Union Power activists argue they need a broad contract campaign. They take inspiration from the Chicago Teachers’ 2012 campaign and strike, where educators mobilized with parents and community supporters at their side.

The next step is to help Caputo-Pearl win the runoff next month.

Meet members of the Union Power slate at the Labor Notes Conference April 4-6 in Chicago.