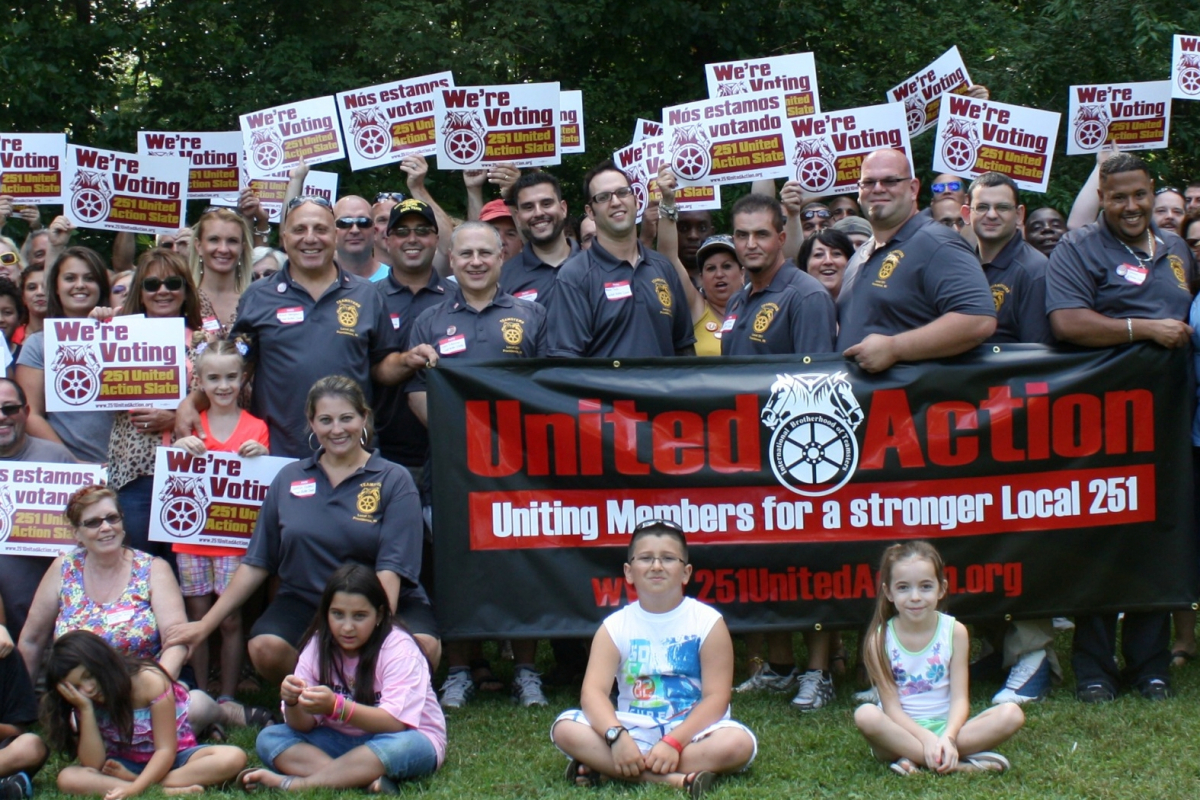 Teamster rank and filers in Rhode Island were voted into office by members fed up with the old leaders they said were corrupt. Some signs from the slate's picnic are in Portuguese because of the immigrant population at the local's largest employer, Rhode Island Hospital. Photo: United Action.

Rhode Island Hospital worker Nick Williams was so angry that his new supervisor was his union business agent’s brother that he came home from work and Googled “Teamsters 251 sucks.” And that was the turning point that led to rank-and-file Teamsters taking over the local that covers all of Rhode Island.

Williams had found the Teamsters for a Democratic Union (TDU) website run by two 251 rank-and-filers. On October 31 all 10 candidates on their slate, United Action, were elected, with about 53 percent of the vote. They won despite an entrenched leadership group that had been in office since 1993—and despite threats by a Teamsters International vice president who said on YouTube, “They need to be punished.”

The 5,200 members of Local 251 work at dozens of employers, but more than 2,000 of them are the non-nursing staff at Rhode Island Hospital. At the local’s second-largest employer, UPS, two drivers had toiled for years, opposing bad contracts, organizing members to turn down excessive overtime, and running, unsuccessfully, on a partial slate in 2007.

But the two drivers, Matt Taibi and Matt Maini, hadn't cracked the hospital. Until Williams joined their team.

Williams describes the state of the union at the hospital as “in bed with management.” Business agents would, with the collusion of managers, create well-paid jobs for their friends—sometimes even “no-show” jobs whose duties did not include reporting for work.

When the contract was near expiration, and its last and largest raise was due, BA’s would simply sign away the raise with a Memorandum of Agreement that members weren’t allowed to see, in violation of the Teamsters constitution.

Maini said the hospital had fired more than 400 workers in two years—and the union always advised members who were up for termination to resign. “Everyone knew someone who got screwed by the BA,” Williams said.

“The hospital had essentially been taken for granted by the local for 20 years,” said Taibi, who will be the union’s new top officer, secretary-treasurer, come January 1.

The person who’d originally brought the union to the hospital, back in 1993, was Paul Santos, who worked in the shipping department. Santos had been a steward but resigned, disillusioned. Most people at the hospital saw him as the person they trusted most on union questions.

Sandra Cabral, who works with medical records, says she “never cared for the union because I felt I was paying monthly for favoritism.” In January this year she was approached by a co-worker about TDU. She was interested off the bat, but “when she told me Paul was involved, I said I’m going to check this out.”

After Santos joined the dissidents, TDU grew from 10 members in the local to 100. Santos will be Local 251 president.

Early this year, the TDUers collected signatures for three bylaw changes. They wanted elected stewards, rather than appointed; elected rank-and-file members on negotiating committees; and any increase in officers’ salaries to be voted on by the membership.

Secretary-Treasurer Joe Bairos enjoyed combined salaries of $187,999 last year, from the local, the New England Joint Council, and the international union, as well as a car and an expense account.

The January and February union meetings saw 600-700 people come to debate the bylaws—up from a usual attendance of 80 or so. More than 800 came to the March meeting, and had to vote in shifts, chanting about solidarity and democracy in the parking lot.

Because the incumbents mobilized, too, the bylaw changes won a majority but not the required two-thirds.

The next phase of the United Action campaign, with Williams as manager, brought 300-500 members to a meatball dinner, a comedy night fundraiser, a picnic.

Williams says that when they’d go to neglected companies to campaign, the members would be hostile, thinking they were from the union. “But when they heard what we had to say, out of 130 in that barn, we got 100 for our email list,” he said.

The insurgents had the advantage of help from a TDU staffer on campaign strategy and logistics and from a TDU attorney who more than once backed the incumbents down from illegal actions.

After they take office the new officers will cut their salaries to free up $250,000 a year for member education and training, Taibi said. They will reintroduce the bylaw changes and plan an aggressive contract campaign at Rhode Island Hospital next year.

Cabral, soon to be recording secretary, is in charge of setting up a women’s committee. She says she wants to see hospital housekeepers—mostly women—receive equal pay with the men in environmental services.

At UPS, where 10- to 12-hour days are the norm for drivers, Matt Maini, the new BA, will organize members to enforce their contractual right to work only 9.5.

Maini has back surgery to show for his long days and 21 years at UPS.

“If you’d asked me 15 years ago, I'd say this would never happen,” he said. “But we decided we were going to dedicate our lives to making this a real union for the members.”

Related
Teamsters United Takes the Wheel »
Work Saturdays, Huh? How UPS Drivers Resisted by Complying »
Shocking Death on Set Shows What’s at Stake in IATSE Film and TV Crew Contract Fight »
Teamster Insurgents Plan for a Win—And What Comes After »
Viewpoint: We Must Prepare to Strike UPS in 2023 »