Viewpoint: AFL-CIO Convention Repositions Unions to Speak for All Workers 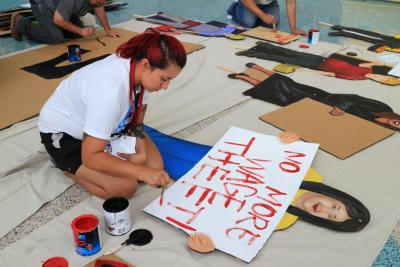 At the AFL-CIO convention in September, participants made puppets representing workers in all sectors, not just those represented by unions. The art reflected the theme of the convention. Photo: Slobodan Dimitrov.

The AFL-CIO Convention in September took an important turn to reposition unions toward speaking for all working people in the United States. This was a correction to the narrow focus on its dues-paying members and traditional electoral work that has cursed the movement for most of its history.

To argue that this turn represents an abandonment of current members, as Steve Early does here, is factually false and politically wrong.

It helps to understand what the federation is and is not. It is a collection of unions “held together by a rope of sand,” as a former federation president put it. From the central labor councils to the national organization, affiliates that don’t like the turn of events just quit.

What the convention did do was focus on new forms of bargaining and organizing. The heroic organizing campaign by the Communications Workers at T-Mobile and the powerful strike by the Chicago Teachers Union were hardly the only examples promoted.

Organizers for domestic workers were honored from the stage on opening night. Immigrant “dreamers” hired to organize traditional bargaining units in car washes, grocery stores, hotels, and construction in an L.A. County Federation pilot program were likewise headlined the next day.

The president of the New York Taxi Drivers Alliance was added to the AFL-CIO Executive Council, and is getting Steelworkers and federation support to organize in other cities.

Workshops focused on international campaigns and organizing in the South. Day laborers, previously seen as the enemy of the building trades, have been welcomed into the house of labor in their own organizations. Worker center partnerships with unions in Texas and other states were featured in workshops and on the convention floor.

How exactly this amounts to “It was taken as given that these additional working Americans can’t be recruited into traditional bargaining units” is hard to comprehend.

It was simply impossible to dismiss these developments at the convention unless you had your mind made up before you went there.

The false charge that “the new thinking is that labor can boost its membership stats—and political clout” by “counting as members people on those groups’ mailing lists” (referring to the Sierra Club, the NAACP, etc.) was never even proposed at the convention, never mind adopted. It surfaced in the press a few months ago, but was dismissed.

Much of the political focus of the convention was oriented to improving conditions for current members as well as non-members. Does the fight against privatization, or defeating right-to-work laws, count as in the interest of current union members? Or is this somehow a part of what Early calls “further abandoning the workplace terrain”?

Working America, another target of Early’s disdain, does not “dilute” the current membership of the AFL-CIO. It adds folks to whom current members can reach out for solidarity.

In Lynn, Massachusetts, for example, the labor council built a several-thousand-strong Working America membership. When the council wanted to help pass a bond for a new middle school, we had double the number of folks to reach out to. We won the vote, and this helped our union teachers and building trades—not to mention the working-class children of Lynn. (Of course, those kids don’t pay dues.)

Working America membership is not at all the same thing as traditional union membership—something that WA organizers and skeptics inside the AFL-CIO would agree on. But it is a tool to expand our reach, and WA is experimenting with building traditional workplace organization in New Mexico with the stagehands union, IATSE, and building rooted community organizations in Pittsburgh. In Lynn, a small group of WA activists meets monthly on a campaign to raise the minimum wage.

Perhaps the most telling part of Early’s trashing of the AFL-CIO convention is when he quotes what he refers to as one of the more retrograde leaders in the movement. The Laborers’ president said, “We came here to talk about a new movement. But let’s not forget about the old movement.”

Early then agrees with the call to return to more focus on the current dwindling membership. Pedal harder, fight, fight, fight?

This raises a more fundamental question—not just what convention are we talking about, but what country?

Labor’s history on fighting white supremacy has been poor. We are a labor movement that promised to kill Senator Wagner’s National Labor Relations Act in 1935 unless he eliminated anti-discrimination language. Our federation refused to endorse the 1963 March on Washington, although all unions claim that legacy today. Until very recently unions were openly hostile to immigrant workers joining our organizations and even hostile to those workers’ efforts to organize themselves.

This convention marked a long overdue strategic shift. The shift is to speak for the whole working class.

Nothing was more indicative of the shift than a resolution condemning private prisons and mass incarceration of peoples of color. This was a response to internal pressure from AFL-CIO members, the inclusion in pre-convention committees and discussions of representatives from worker centers and academics like Stephen Pitts of UC-Berkeley, President Rich Trumka’s influence, the Teachers union responding to widespread criticism of the “school-to-prison pipeline,” and intense discussions with AFSCME, which represents correctional officers.

For the AFL-CIO to speak out on the current system of racial oppression is a dramatic step, particularly in the face of decades of racist crime-baiting by the right. You can’t unify the working class by ignoring the divisions that exist.

The convention did not abandon current members or the workplace, although no one has a blueprint for the future relationship between current collective bargaining structures and new forms of organizing.

The convention recognized that there is no way forward for current members without a re-direction of the movement, to construct an alliance of working class forces and allies to change the country.

Launching such a strategic offensive while our movement is under siege will be, needless to say, extremely difficult. But this is the context in which we can rebuild collective bargaining, even as we scratch and claw to defend our current position.

Jeff Crosby is president of the North Shore Labor Council in Massachusetts. Bill Fletcher, Jr. is co-author of Solidarity Divided: The Crisis in Organized Labor and a New Path toward Social Justice.

A version of this article appeared in Labor Notes #416, November 2013. Don't miss an issue, subscribe today.
Related
Viewpoint: It’s Time to Tap into Labor’s Fortress of Finance »
Viewpoint: Two Contrasting Visions of the Labor Movement Were on Display in June »
We Can't Just Keep Saying 'Pass the PRO Act.' We Have to Organize. »
Richard Trumka, 1949-2021 »
Los Deliveristas Speak: How Delivery Workers Are Organizing to Take On the Apps »