Ten Thousand Aghast as 'Right to Work' Passes in Michigan 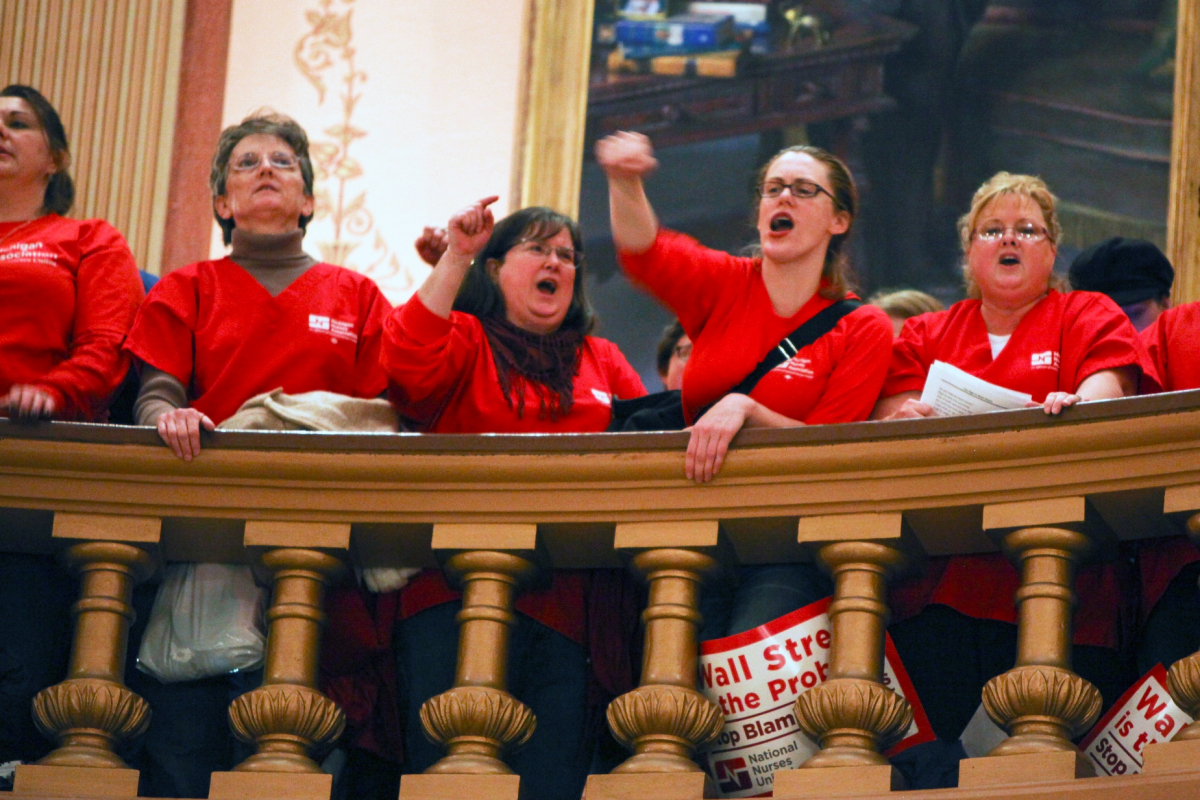 Nurses circled the rotunda in the Michigan state Capitol in Lansing December 11. Republicans hurriedly voted in right to work during the lame-duck session, before losing five seats in January. Photo: United Steelworkers.

Union protesters in front of the Michigan Capitol today knocked down an enormous tent erected by Americans for Prosperity, the Koch-brothers-funded group that helped bring right to work to the state. State troopers arriving on horseback were helpless, bringing to mind images of Humpty Dumpty and all the king’s men.

Several dozen protesters were sitting down in the Capitol Rotunda, risking arrest, and more were outside the governor’s office. Three school districts were forced to close schools because so many teachers called off for the day.

Four giant inflatable rats in the 10,000-person crowd were named for prominent Republican politicians and their richest backer.

But despite the anger and the chants, the legislature made it official. Governor Rick “The Nerd” Snyder was expected to sign right-to-work bills tomorrow. Such laws give workers covered by union contracts the right to opt out of paying dues, thus allowing freeloading and breaking up solidarity.

Michigan unionists were shocked last Tuesday when Snyder announced his support for right to work. His legislative allies quickly did their part, passing the needed public and private sector bills last week as police used Mace to clear the Capitol of protesting union members.

Snyder had previously said right-to-work was too divisive and not on his agenda. Such laws outlaw union contracts that require all represented workers to pay dues, allowing members to resign and depleting union treasuries. United Auto Workers President Bob King, who has 151,000 members and 190,000 retirees in the state, said the governor’s about-face “blind-sided” him.

But the plan to make Michigan the 24th right-to-work state was long brewing. With 17.5 percent union density, the fifth-highest in the country, and a record of voting for Democratic presidents, Michigan was a tempting target for such billionaire-funded national groups as Americans for Prosperity (the Koch brothers) and for the state’s home-grown billionaire, Richard DeVos of the Amway fortune.

Writing in a blog for The Nation, Lee Fang shows that Americans for Prosperity’s Michigan chapter quadrupled its spending in 2010, the year Snyder was elected, to $1.1 million. The Mackinac Center, a longtime right-wing think tank in the state, spent $5.7 million last year, and stepped up its game last week to support Snyder’s move. DeVos funds both groups.

Michigan Democratic Party Chair Mark Brewer dates the campaign for right to work to at least 2007. A video shows former Michigan Republican Party Chair Ron Weiser speaking to a Tea Party meeting in August. Weiser, now finance chair of the Republican National Committee, describes meeting with DeVos, former Michigan Governor John Engler (now with the Business Roundtable), representatives from Americans for Prosperity, and Frank Keating, former governor of Oklahoma, which passed right to work in 2001. (Here the CEO of Oklahoma's Chamber of Commerce admits he can't name any companies that moved to Oklahoma because of right to work.)

Weiser: “We hired a political consultant, and I invested a bunch of money and time, and I was working on that full-time from October [2007] until March [2008]…. [After meeting with the above-named players], what we determined was that to win that election, and to be sure we were gonna win it, we couldn’t have a governor that was against it. So we decided to wait. Wait until we had a governor. Now we have a legislature and we have a governor.”

Those elements were in place by January 2011. But Snyder and the Republican majority in the legislature held off on right to work, perhaps warned by the tumult next door in Wisconsin that winter. Instead they pursued a piecemeal strategy, appointing “emergency managers” to run troubled cities and throw out union contracts, taking away teachers’ automatic dues deductions, rescinding domestic partner benefits for public employees, defining university research assistants, who were organizing, as non-workers, and a host of other measures that wouldn’t rile everyone at once.

Attempt to Head Off Right to Work

But Proposal 2 went down to defeat decisively, 57 to 42 percent. It fell victim to a $30 million disinformation campaign, with ads citing the sanctity of the constitution and warning that the bill would prevent school districts from firing child molesters.

Campaign leaders were reluctant to specify any particular laws that Proposal 2 would have outlawed, according to Mark O’Keefe, a staffer for the Detroit Federation of Teachers—presumably afraid that any specific was likely to offend someone. O’Keefe thought the vagueness “created uncertainty and mistrust” among voters, and that a simple ban on right-to-work would have stood a better chance.

The campaign seemed to come from nowhere, in any case. It was not the result of discussion within the union base. Community allies were approached after the decision was made.

And Ray Holman, legislative liaison for the UAW’s big state employees local, thinks the proactive strategy was actually a disadvantage. He contrasted the defeat with last year’s victory in Ohio, where voters saved collective bargaining rights by repealing Senate Bill 5. “They had an advantage because rights were taken away,” Holman said right after the vote. “Here it was a harder climb. If they passed right-to-work and then we tried to repeal it, we’d have a better chance.”

He probably won’t have the chance to find out. Legislators attached appropriations to the right-to-work bills, and money bills can’t be repealed by the citizens, in Michigan.

At the same time, though, O’Keefe noted that pre-election polls showed union members backing Proposal 2 by just two-thirds. “If we only get two-thirds within the unions, it’s not surprising we don’t get a majority overall,” he said.

Some now want to blame Bob King for Snyder’s initiative. If he hadn’t demonstrated to the world that unions aren’t that popular in Michigan, they say, Snyder might not have gotten the right-to-work idea. In addition, King angered Snyder by going for Proposal 2 even though Snyder asked him not to.

But it didn't take the defeat of Proposal 2 to alert Republicans to right to work, nor any desire for personal revenge on Snyder’s part. The Nerd, as he likes to be known, doesn’t have that personality. More likely he moved now because the balance of votes in the legislature will shift in January. Though they retained a majority in both houses, Republicans lost five seats in the House in November, and not all Republicans have been voting with the majority on right to work.

Stepping back, though, it is possible to partly blame the victim of this latest assault. The UAW is the leading union in Michigan, and it is the union that, over the last generation, led the way nationally on concessions of all kinds, from speedup on the job to labor-management participation schemes to two-tier pay. Though many remain loyal, it’s impossible to claim that the UAW is popular with its members.

At today’s rally, Teamsters President James Hoffa, who’s from Michigan, said the way back for unions will be a long fight. The slide down has been long, too, and now it’s accelerating.

A version of this article appeared in Labor Notes 406, January 2013. Don't miss an issue, subscribe today.
Jane Slaughter is a former editor of Labor Notes and co-author of Secrets of a Successful Organizer.
Related
Labor Notes Conference 2022: It’s Gonna Be Big »
Here's What's in the New Bill Jointly Backed by Uber and the Teamsters in Washington State »
Richmond Educators Are First In Virginia to Win Bargaining Rights »
Mexican Auto Workers to Choose New Union in Landmark Vote »
UPS Drivers Stage a Walk-in to Defend a Fired Co-Worker »