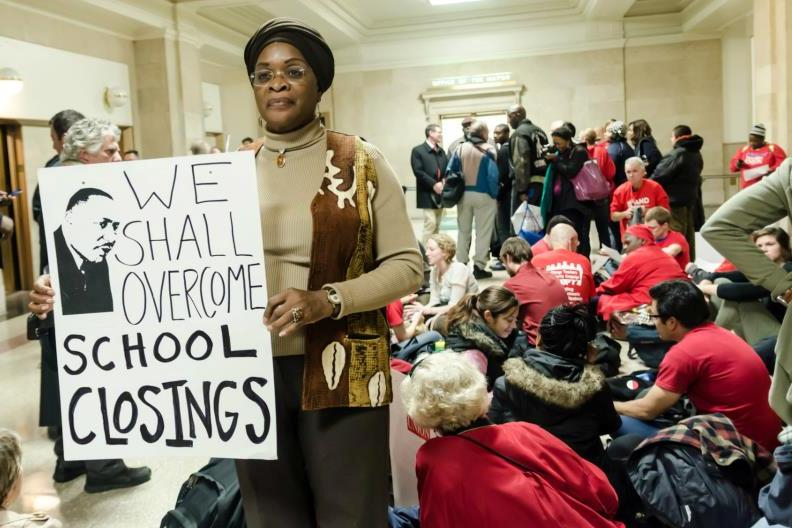 Teachers and community groups in Chicago are demanding a moratorium on school closings. Ten were arrested Friday in a sit-in at the mayor's office. Photo:Sarah-Ji.

“Moratorium Now!” chanted more than 100 Chicago teachers and parents Friday as they protested school closings outside the office of Mayor Rahm Emanuel.

Demonstrators demanded a meeting with the mayor and gave speeches in the late afternoon. By 5 p.m. around 50 people were still inside when the building closed. By 10 p.m., 10 people, including teachers, were arrested when they refused to leave.

Chicago Teachers Union (CTU) leaders had vowed that their seven-day strike in September was just one step in their fight to defend public education. “They should be opening schools, not closing them,” said Carrene Beverly-Bass, a 31-year elementary teacher and one of those arrested. “The civil rights issue of our time is what’s happening to public education.”

The protest and sit-in were organized by Teachers for Social Justice, Action Now, which works on housing, living wages, and education, and neighborhood groups from Chicago’s south and west sides, including the Albany Park Neighborhood Council and Kenwood-Oakland Community Organization. Beverly-Bass said teachers were riding momentum from their strike, widely seen among parents as a fight to improve the schools.

The protest anticipated the December 1 deadline for the city to announce its next round of school closures, rumored to be as many as 100 schools. Newly appointed Chicago Public Schools CEO Barbara Byrd-Bennett recently requested a five-month extension for the announcement.

CTU Organizing Director Norine Gutekanst said the union suspects that Byrd-Bennett wants to release the schools’ names only after it is too late for parents and allies to wage a campaign to keep them open. Between 2008 and 2010, CPS closed, phased out, or “turned around” 53 schools, shifting 15,000 students in the process. Two elementary schools were saved because of community protest and mobilization.

The teachers union has called for a moratorium on closures for the year, to give the district and the community coalitions that include the CTU time to reassess the issue of shutting down schools at all.

The Board of Education has signed a contract to open 60 new charter schools in the next five years, continuing its pattern of replacing public schools with privately operated charter schools.

The district claims that its closing criteria are based on under-utilization rather than under-performance, and that the closings will save money. But the Philadelphia Research Initiative, part of the Pew Charitable Trusts, analyzed school closings in six urban districts and found short-term savings to be minimal. The cost of moving students and supplies can add up, as can maintaining vacant buildings, and cities lose reimbursement for the time that enrollment drops when a school is closed. Teachers and coalition activists say that closures are a way to empty out public schools to replace them with charters.

An analysis by Catalyst, a Chicago education magazine, showed that nearly 80 percent of closed schools in Chicago now house new schools, including charters and magnet or selective-enrollment schools.

MORE THAN JUST A CONTRACT ISSUE

Gutekanst, a third-grade teacher turned CTU staffer, said the union’s contract fight built strong bonds with parents and community allies, who then turned out for the protest and sit-in. She said the union is committed to a protracted struggle over school closings.

While they cannot negotiate directly over school closings, teachers made recall rights a key issue in their strike. They still have concerns about teachers being pushed out of the district and the profession if schools are closed.

CTU framed its contract fight as part of a wider defense of public education and a push for increased resources for schools. Teachers spent the last two years fighting alongside a community-labor coalition against tax breaks for companies and against diversion of property taxes away from schools. “Our members got a chance to get involved with parents in a new and different way,” Gutekanst said.

Adams picketed with her teachers during the strike and says of her fellow students, “If they close the school, they are going to have to move to a different school over and over again.”

Lillian Kass, a nine-year special education teacher on Chicago’s West Side who participated in the sit-in, said actions like Friday’s action, including civil disobedience, are part of what is necessary to fight back privatization of the schools. She emphasized that school closings disrupt the entire neighborhood. “I see my students and how they rely on school for stability,” she said. “Even when we lose one teacher it’s really hard for them. They take it personally.”

CTU is turning out members for a rally next Monday, Veterans Day, in downtown Chicago alongside Support our Schools, the broader coalition that fights school closings. Beverly-Bass was excited by the energy the coalition brought to the protest, and believes school closings are part of bigger city-wide issues: “It’s not just the teachers trying to preserve their jobs,” she said. “It’s about education, poverty, mental health, social services.”

A version of this article appeared in Labor Notes #404, November 2012. Don't miss an issue, subscribe today.
Related
Chicago Passes Union-Backed Bill for Civilian Oversight of Violent Cops »
Despite Slow Vaccine Rollout, Teachers Are Being Pushed Back Inside »
Chicago Teachers Are Voting on Whether to Defy Monday's Reopening Order »
Educators Demand Virtual Schools as 'Least Bad' but Safe Option »
Chicago Unions Demand to Defund Police and Fund Health Care for All »