‘Grand Bargain’ Would Be a Social Security Swindle 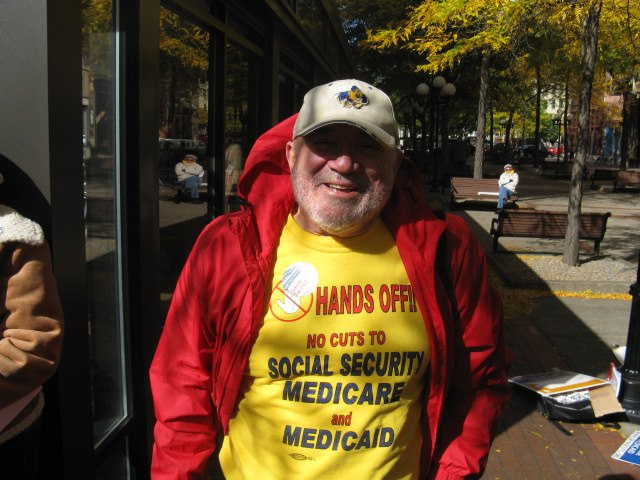 Seniors and supporters demonstrated in nearly 100 cities to stave off cuts to Social Security, Medicare, and Medicaid. They demanded "hands off" the programs and an end to tax cuts for the top 2%. Photo: Alliance for Retired Americans.

If Congress and the President reach a “grand bargain” in the lame-duck session, seniors, the poor, and the disabled will pay for it—and it won’t be a good buy.

Obama has used the “grand bargain” language when talking about his goals. What most people mean by that is a deal that would give the Republicans something they want—cuts to Social Security, Medicare, and Medicaid—in exchange for something the president wants: letting the Bush-era tax cuts for the wealthy expire on December 31.

After months of vigorous campaigning for Obama, the AFL-CIO and allies made a “hard pivot” and held picket lines and other actions in close to 100 cities November 8, demanding that the lame-duck Congress keep its hands off.

Obama’s statements on the popular programs have been less than reassuring.

In the first candidates’ debate he said his position on Social Security was “somewhat similar” to Mitt Romney’s. With his habitual bipartisanship, Obama said the program needs “to be tweaked the way it was by Ronald Reagan and Democratic Speaker Tip O’Neill.” Those 1983 changes raised the retirement age from 65 to 67.

In his remarks immediately after the election, Obama stressed his desire to raise taxes on the wealthy and claimed the voters were with him. But he stayed mum on Medicare and Social Security—programs popular with his own voters and most of Mitt Romney’s.

The only people eager to break the strands of the safety net are those who don’t need that monthly check from the Social Security office themselves, and don’t know anyone who does.

In the elite world of bankers and deficit hawks, politicians look weak when they defend Social Security—that’s pandering to the masses. Pundits of both parties call it courageous to stand up to your base and tell workers, grandpas, and disabled people to bite the bullet. The big-money funders like that brand of guts.

If Obama makes the grand bargain, he can count on plenty of praise in the pages of the Washington Post.

The question is whether labor will let him get away with it, and thus far the signs are encouraging.

When Obama was first elected president, union leaders took a “follow the leader” approach to the administration. Democrats had been out of power forever, and labor wanted to look like a team player.

But the president’s agenda turned out to consist of a watered-down health care bill and no labor law reform. AFL-CIO President Rich Trumka seems determined not be caught flat-footed this time, when long-cherished programs are on the chopping block.

Before the election, Trumka warned fellow unionists to get ready: “A bipartisan group of senators who are not up for reelection is working behind closed doors in Washington to reach a so-called grand bargain that … ignores the views of voters,” he wrote in an October editorial.

AFL-CIO headquarters asked all affiliate unions to hold over their staff who’d been deployed for the election, to run the November 8 actions. Many international presidents’ first post-election messages mentioned the two elements of the grand bargain.

But Nancy Altman, co-chair of the Strengthen Social Security coalition, is concerned that slashes to the three programs are so unpopular that lame-duck politicians won’t use a normal legislative process but instead “negotiate behind closed doors, with no hearings, no amendments—it becomes a take-it-or-leave-it package.”

Altman warns of three ways “grand bargainers” in Congress and the White House might lower benefits: change the cost-of-living formula, raise the retirement age, and/or cut the benefits of “higher-income” people.

A new cost-of-living formula, Altman says, is the most talked-about idea right now. Using the “chained Consumer Price Index” to figure COLAs for recipients would shrink checks because it increases at an even slower rate than the inflation adjustment used now—which already doesn’t take enough account of health care costs.

Using the chained CPI would cut benefits not just for future retirees but also for those receiving payments already—thus breaking the promise all candidates made not to affect current retirees. The cuts would snowball over time, so that younger beneficiaries—like injured veterans—and those who live longest—that is, women—would be hurt the most.

Raising the full retirement age would in effect cut benefits, because most workers simply will not be able to wait till they’re 69 or 70 to retire. Whether for health reasons, because they’re pushed out, or simply because they can’t stand working anymore, most workers already apply for benefits before they reach the full age, accepting lower monthly checks.

In 2010, 72 percent of new beneficiaries took their benefits before their full eligibility, and nearly half took benefits at 62.

The fact that Social Security covers everyone is what has made it popular with everyone, Altman said. Decoupling what participants receive from their wages would move Social Security toward a subsistence-level benefit—more like welfare—and thus shrink its political support among middle and higher earners.

What’s worse, in order to save a reasonable amount of money, such cuts would have to affect not just those at the top but millions of beneficiaries further down the ladder.

“To make it ‘work,’” she said—to save the billions Obama and the Republicans are both looking for—“it would have to affect the top 70 percent, not the top 2 percent.”

All three proposals would eventually leave recipients poorer. And changing the COLA would start hurting them right away.

HOW TO SAVE IT

Social Security contributes nothing to the deficit, because it has its own trust fund, made up of worker and employer contributions. The trust fund boasts a huge surplus now—$2.7 trillion—but it is expecting a shortfall in 2037, because of the baby boomer bulge.

There’s an easy way to make that up, requiring only what Obama has already promised: higher taxes on the wealthy.

Currently, workers pay payroll taxes (FICA) only on wages up to $110,100 per year. If we “scrapped the cap,” forcing those who earn more than $110,100 to pay FICA on all of their income, that would close about 70 percent of the funding gap.

Congress scrapped the cap on payroll taxes for Medicare back in 1993. Post-election seems like a good time to do the same for Social Security.

To bust some myths about Social Security, read here.

A version of this article appeared in Labor Notes 405, December 2012. Don't miss an issue, subscribe today.
Jane Slaughter is a former editor of Labor Notes and co-author of Secrets of a Successful Organizer.
Related
New York City Retirees Fight to Defend Their Medicare Benefits »
Will the Stimulus Stop States From Slashing More Jobs? »
Why Did California's Tax the Rich Measure Lose? »
Viewpoint: This Election Shows Labor's Ground Game Matters (Especially During a Pandemic) »
Ballot Measures: Mixed Results for Workers »