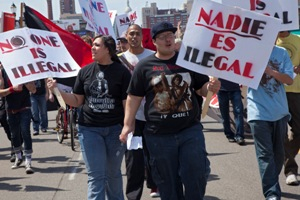 The Obama administration's policies have cost thousands of immigrant workers their jobs. Some unions, like SEIU Local 26, fight alongside immigrant members and communities, use the contract to win wider protections, and spread those gains to non-union workers. Photo: Jim West.

The horrific workplace raids of the Bush years may be over, but instead of sending in armed federal agents to round up hundreds of workers and jail them, the Obama administration has a quieter—and just as ruthless—approach.

Immigration and Customs Enforcement, better known as ICE, investigates employers, requiring I-9 audits to determine whether workers have the correct papers to work in the U.S. The agency tells companies to fire workers who can’t re-verify their status, or be fined. Untold thousands have lost their jobs.

When an I-9 audit is ordered in a union workplace, the union is too often unprepared and ignorant of precedent. Members blame the union for not doing enough, and lose their jobs.

But in Minnesota Service Employees Local 26 is fighting alongside immigrant members and their communities to combat the mentality that immigrant workers are victims. The union has used the contract to win wider protections for immigrant members—and spread those gains to non-union workers—at a time when immigration rules are becoming increasingly strict.

Between 2009 and 2011, two major companies where janitors are represented by Local 26 were faced with I-9 audits. Management in some cases gave workers one week to provide documentation or face immediate termination. Some had first submitted their papers over 12 years ago.

With 1,256 union janitors facing the ax, the union called a full membership meeting that weekend, to get accurate information from members, give them legal counsel, and devise a response. Over half the membership attended—scared, confused, and frustrated.

How to Prepare Your Contract for I-9 Audits

Timing is everything: Make sure the company must notify the employee and union in writing immediately with details about what specifically is wrong when work authorization status becomes an object of inquiry.

The language SEIU Local 26 won includes unpaid time off up to 120 days, with no loss of seniority, in order to correct the identified problem. Name change or correction of Social Security number cannot be cause for a break in employment or a re-hire.

The contract guarantees that an employee terminated over a work authorization issue is placed on the layoff list and will maintain seniority if she can resolve the problem within 12 months.

And when federal immigration reform is finally enacted, union and company will meet and confer on issues arising from work authorization status.

That same week union officials met with the Department of Homeland Security and secured a series of one-week extensions for members to get their papers in order.

On the morning of the last expiration date, when 400 members gathered at the union hall for a march on the boss, they found out they had just won another 90 days to re-verify.

“These audits have far-reaching repercussions for the entire community,” said Local 26 Secretary-Treasurer Greg Nammacher. “Folks needed the union to be something they can trust—to become an extension of their community.”

So Local 26 organized a “Political Brigade” to lobby Congress for immigration reform through card and petition drives and delegations of janitors lobbying in D.C., and an “Apoyo (support) Brigade” to help workers survive if they were laid off.

The Apoyo committee brokered connections with immigration lawyers, who identified 20 members with the possibility of obtaining papers. A time bank was set up, where unemployed workers could trade a few hours of carpentry work for a few hours of babysitting. The committee created a discount card from local retailers who agreed to give struggling union members up to 20 percent off on purchases such as groceries.

Despite the extra time the workers had won, eventually hundreds of janitors lost their jobs. They were then recruited to become associate members of Local 26. They did not pay dues but were welcomed to union meetings and actions. The union continued to work to recover their unpaid vacation pay.

Javier Morillo, president of SEIU Local 26, said “In an I-9 audit the union is the one entity that members feel has the job to defend them. Although we fought hard together during the audits, many members still experienced the things we won as defeats, because at the end of the day we didn’t do enough to prevent them from losing their jobs.”

Soon talk of foreclosures surfaced at union meetings. The union partnered with neighborhood groups to negotiate better mortgage interest rates for members and even the halting of some foreclosures.

The union intentionally created a social hub for workers to gather around. When times were hardest the union threw parties to celebrate traditional Mexican holidays and held toy drives.

All of these shared struggles and demonstrations of commitment to the community of the fired janitors led to a solid connection to the union.

The network would pay off. In the final quarter of 2009, the union was faced with contract negotiations.

As a result of the audits, the union had lost almost 80 percent of front-line stewards in buildings throughout the Twin Cities. Management at the janitorial contractors demanded a $5-an-hour pay cut and the right to reduce all members to part-time status.

During this fight associate members participated in the contract convention and weekly protest actions and attended the strike vote.

Together they won a contract that not only rejected the concessions but added language to give due process to members attacked with I-9 audits (see box).

Through the support structure for laid-off members, Local 26 had a base ready for a long-term movement. But they were ready for action now.

They soon had a target. Chipotle, the fast-food company that fancies itself an ethical employer, fired nearly 700 Twin Cities workers in December 2010 after an I-9 audit. Workers said they were denied last paychecks and earned vacation time, and that the company did not honor the 90-day period the Social Security Administration tells employers to offer workers to re-verify documents.

CTUL organized a small committee of recently fired Chipotle workers, and together with the SEIU janitors they organized a sit-in at a Minneapolis Chipotle, supported by solidarity rallies, handbills, and pickets at other locations.

“The timing was perfect, with janitors having the momentum behind the contract language victories and Chipotle’s vulnerable public position as a ‘responsible and ethical employer,’” Nammacher said.

CTUL and the union helped workers recover final wages and vacation pay and pressed Chipotle to publicly announce its support for immigration reform. Instead of the typical Chamber of Commerce position in favor of low-wage “bracero” programs, Chipotle now backs a path to citizenship.

Nammacher said the union found that direct action against employers involved in I-9 audits was an effective tactic to change their position from “we’re just following the law” to “this system is broken.”

In taking on first their employers and then non-union copycats, Local 26 was able to show the union isn’t just a vehicle for defending the members’ bread and butter but can fight for the broader immigrant community.