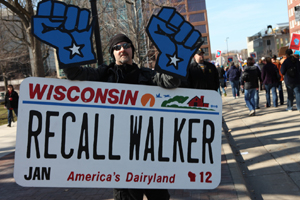 Tens of thousands of Wisconsinites returned to the Capitol March 10 to mark the one-year anniversary of Governor Scott Walker's union-busting bill—and to rally the troops to recall him. Some warn that a new Democratic governor may not even return to the status quo. Photo: Wisconsin AFL-CIO.

In a post-recall world, will a Democratic governor willingly surrender the flexibility and power over state employees that Scott Walker has gifted her with?

But most provisions of Governor Walker’s Act 10 remain in place, and the effort to recall him proceeds full steam ahead. Bargaining is still essentially outlawed, and a legislative committee still determines working conditions, behind closed doors. Higher pension and health care costs remain in place. For public employees at the low end, this has meant a 20 percent cut in take-home pay.

As my union and others throw themselves into getting Walker out, I have a vision of the post-recall world. It comes to me whenever I attempt to get some slackers to recommit to union membership, and they demur because the recall is clearly the best investment of their limited time, energy, and money.

My vision looks like this: The Dems have won, Walker has been ejected from the governor’s mansion, and the new governor is ready to launch her agenda of reform and reconciliation. I’m assuming Katherine Falk, seen as the most labor-friendly candidate, has won.

The new governor has invited senior managers of the state workforce into her office. She tells them she intends to restore collective bargaining for all Wisconsin public employees.

Their response is emphatic. Yes, politics and justice clearly dictate that collective bargaining rights be restored, particularly to school district and municipal employees. After all, in their case both worker rights and local autonomy are at stake.

State employees, however, are a different matter. They are her tool for implementing her policies—and she needs this tool, the managers continue, to be compact, efficient, and responsive.

For years top administrators have been struggling to achieve this, trying to negotiate uniform provisions on sick leave, use of professional time, and the availability of flex scheduling. Say what she must about Walker’s methods, but thanks to him, she now has what Republican and Democratic administrations alike had been trying to achieve for a decade: a single document that determines conditions of work for nearly all state employees.

No longer are managers burdened with reconciling conflicting contracts through permissive negotiation of conditions of work. Walker’s State Compensation Plan gives the new governor the power to sweep aside decades of “archaic” civil service statutes.

Rights and rules built up over the years are wiped out. One contract might say the boss must have just cause to force an employee to get a medical certificate for using sick leave, not just a guess about malingering. Another contract might require a different standard of proof. Now the standard is simple and uniform: Management doesn’t have to prove anything.

Surely, the managers suggest, any elected leader who took her responsibilities seriously would think twice before surrendering such flexibility and power.

Hard to Give Up Power

The new governor mulls over their presentation. The practical politician in her has real trouble surrendering any power. Even if it is, she reflects guiltily, the power to act autocratically and without accountability.

Then again, any public employee law changes she proposes will have to make it through a Republican-controlled State Assembly. Perhaps the best approach is to offer public employees half a loaf. She might be able to mollify the Assembly by rolling back Act 10 just for municipal and school district employees.

If state employees raise too much hell (which seems unlikely given their well-established reputation for inertia), she could offer to exempt corrections employees from Act 10 the way that police and firefighters already are.

And what of the state employees who would still feel the full strictures of Walker’s “reforms”?

Well, she decides, all they have to do is elect a Democratic State Assembly in November.

In the post-recall world I envision, Wisconsin state employees will get back very little of the collective bargaining rights they’ve lost.

One reason is structural. The Republicans will retain control of the State Assembly after the recall smoke has cleared, no matter what else they lose. Given that their margin of control is 12 seats, they can probably also withstand the November 2012 elections.

They will be in a position for the foreseeable future to obstruct and delay any attempts at change. Given the Democrats’ abysmal performance the last time they controlled both the governor’s mansion and the Senate but faced a Republican Assembly, in the budget stalemate of 2007, this seems quite likely.

However, even if the Republican Assembly were to prove more malleable than it was in 2007, there is little reason to believe state Democrats will be willing to expend moral capital to roll back the Walker “reforms.”

When Wisconsin labor and Wisconsin Democrats both have their backs to the wall, each becomes the other’s best friend. But it’s a different story when Democrats are in power. At that point, organized labor, in particular state employee unions, suddenly become rather embarrassing near relations.

The 2009-2011 legislative session was a case in point. Wisconsin state employee unions had four priorities going in: gaining the same workplace civil rights and labor law protections as private sector employees; tightening restrictions on contracting out; establishing University of Wisconsin employees’ right to collective bargaining; and ratification of their contracts.

The Democratic-controlled statehouse accomplished only one of these objectives: bargaining rights for UW employees. When Democratic Governor Jim Doyle left office, he telegraphed his contempt for state workers by bragging that he had “cracked down” on them harder than any governor since the Great Depression.

Clearly, if Kathleen Falk wins, she will preside over a party that has many powerful constituencies that it values more than us.

None of this is to dismiss the value of the recall. I intend to volunteer for Falk, but I have no illusions about her ability to singlehandedly turn around the bipartisan disgrace that state labor relations have become over two decades.

We cannot wait for Falk to rescue us, like Sweet Nell bound to her railway trestle by Snidely Whiplash waiting for Dudley Do-Right to free her. If we do, we will be run over, and deservedly so.

There is one clear way for us to make it in the new Democratic governor’s interest to go to bat for us, and in the Assembly Republicans’ interests to agree to a compromise. That is for us to organize now in ways that make it clear we are capable of taking action on our own behalf in our workplaces, regardless of who is in power.

Participating in the recall is not enough. For decades we have served the Democratic Party, nationally and locally, with a near-canine loyalty. What has it gotten us? To all appearances, the dismissive disregard of those who take our loyalty for granted.

What does it mean for us to organize now to create a power that must be respected later? It means looking for opportunities to unite and to confront. If our union bulletin boards have been removed, we circulate a petition to get them back, so union members can communicate with each other. We list the contacts who took part in that campaign, and prepare for the next action.

When management prepares another “Employee Appreciation” charade, everyone wears black on that day. We paper management bulletin boards and restrooms. We pass flyers out where we work, making it clear that if management chooses to deny us space, we will claim all public spaces and all forums as ours.

Our goal will be to embarrass and to defy, and most importantly, to establish ourselves as a continuing presence in the workplace that cannot be ignored. Our greatest safety is in our visibility as well as our numbers. Going after openly defiant adversaries is difficult. Going after the cowed, the unorganized, and the frantically anonymous is easy, as any bully knows.

A version of this article appeared in Labor Notes #397, April 2012. Don't miss an issue, subscribe today.
Related
After Strike Threat, Wisconsin Nurses Get a Possible Path to Union Recognition »
Wisconsin Nurses Set to Strike, As Employer Claims It's Banned from Bargaining »
Open Bargaining Brings the Power of Members to the Table in Berkeley »
New Jersey Welfare Workers Sound the Alarm on Safety »
New York City Retirees Fight to Defend Their Medicare Benefits »

What Wisconsin needs is what all of us need.

Unleash the AFL-CIO Labor Party and call for a general strike.

In your local of Occupier GA make a motion to insist that the AFL-CIO General Board fund the Labor Party in local, state and federal elections to oppose the two parties of the looter class, the bosses. And move that your local or GA support preparing for a general strike.

What committee are you talking about?