Bankruptcy Returns as a Tool to Crack Unions 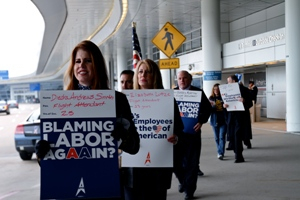 American Airlines flight attendants picketed the Dallas-Fort Worth airport on Valentine’s Day as the company engineered a bankruptcy in order to snuff out pensions and retiree health care. Photo: Transport Workers Union.

With $4 billion cash in hand, why did American Airlines’ parent company declare bankruptcy in November?

Taking a page from its competitors, American decided the billions in concessions and two-tiering its unions had given since 2003—plus the millions extracted from governments in tax breaks and subsidies—wasn’t enough.

Executives chose to dump worker pensions and retiree health care so they could purchase new planes and lift their share price.

“Taking a long-term view, the American bankruptcy is a very positive thing,” a Boeing executive told Reuters. The aircraft maker expects billions of dollars in plane orders from American once its court-ordered restructuring is complete.

“It’s like they decided they don’t want to pay the mortgage so they can go out and buy a couple of hot new cars,” said Bob Owens, an American mechanic and president of Transport Workers Local 562 in New York.

American also wants to lay off 13,000 workers—16 percent of the workforce. It will try to end pensions and retiree health care for 130,000 current and former workers, offloading $9 billion in unfunded pension obligations to a federal insurance agency.

After clawing out $1.8 billion in concessions in 2003, American says labor costs must drop by another 20 percent.

The airline industry has seen more than 150 bankruptcies since the industry was deregulated in 1978, with at least 22 since September 11, 2001.

Hostess, the maker of Wonder Bread and Twinkies, declared bankruptcy in January as well.

The company, which employs 5,000 Bakery (BCTGM) workers and 7,000 Teamster drivers and distribution workers, went to court to tear up contracts. Teamster locals voted in early February to strike as the company sought to slash jobs, pensions, health care, and wages. A strike isn’t expected until April, when a court will decide whether to approve the cuts.

As more than a few have done since the ’80s, corporations are turning to bankruptcy courts not necessarily because they can’t pay their bills—but because those courts allow them to negotiate with a hammer. The options for unions aren’t great, but a few have shown that aggressive mobilizing in the workplace can beat back some of the worst.

The Transport Workers slammed American for hiring Mitt Romney’s old consultancy, Bain & Co., to “assist in labor-cost assessment and negotiation” at a cost of $525,000 a month.

TWU, which represents almost 27,000 mechanics, techs, and baggage and ramp workers at American, also protested after bankruptcy filings revealed the airline keeps a $30 million townhouse in London for executives to use.

“We get the gristle and crust, while they’re ordering another turkey and eating the whole thing,” said Ken MacTiernan, an American mechanic for 25 years.

TWU has hired a bevy of lawyers and bankruptcy specialists to wrangle with the company, and launched a petition among members to protest the attack on pensions and the outsourcing of maintenance that American is likely to request from the judge.

“It’s not make-executives-pay-for-bad-decisions court,” said TWU President Jim Little on a call with members. “It’s not fair, it’s not equality of sacrifice, it’s not what you or I would care for.”

Little said the union will look for “tradeoffs,” efficiencies, and in-sourcing to reduce layoffs.

An email and text-blast system keeps members up to date on court proceedings, and small rallies have kicked up some dust at Romney campaign events.

The union picketed at Dallas-Fort Worth airport February 14 but is unused to confrontation with American. TWU constantly references its “partnership” with management, saying its cooperation kept maintenance in-house while competing airlines all outsource.

Less mentioned is that TWU did so by instituting a two-tier wage, where entry-level mechanics make about $9 an hour. Their work must be certified by a senior mechanic, Owens said, and is limited to 10-20 percent of work.

In a few circumstances, unions have come out swinging when faced with bankruptcy.

Workers at high-end Hart Marx clothing factories voted in 2009 to occupy their plants if the company’s lenders tried to shutter the 127-year-old company. Hart Marx had declared bankruptcy and its primary lender, Wells Fargo, was eager to liquidate the firm.

Nearly 4,000 jobs were at stake nationwide. Members in New York and Illinois in Workers United, a Service Employees (SEIU) affiliate, voted to occupy. They rallied and garnered the support of the Illinois state treasurer, who threatened to cut off government business with Wells Fargo if it liquidated jobs.

They were copying the example of Chicago’s Republic Windows and Doors workers, who saved their plant through a factory occupation under similar circumstances in 2008 (and again just two weeks ago).

A British buyer stepped forward to purchase Hart Marx, promising to honor contracts and preserve jobs.
Big plants in western New York and a Chicago suburb remain open today, but others closed, including factories in Alabama and Illinois and an Indiana warehouse, costing at least 525 jobs.

In Milwaukee, the telecommunications battery-maker C&D Technologies attempted to negotiate a $6-an-hour wage cut with the Steelworkers last year as the company operated under the cloud of bankruptcy threats.

C&D issued warnings that it could shift the 200 jobs to its Mexican plant if workers didn’t cough up concessions.

Union lawyers found hundreds of thousands of dollars in city and state subsidies the company would lose by moving—and C&D withdrew the wage demand (though members did approve pension cuts).

American also won significant subsidies from taxpayers, including in 2003 a one-cent sales tax boost in Tulsa, Oklahoma, that handed $22 million to the company to keep its almost 7,000 jobs there.

“I expect the company to go play pinochle with Obama,” said MacTiernan, a member of TWU Local 564 in Southern California. “I expect a different approach from my union. TWU officers need to go to jail if that’s what it takes.”

At Hostess, the Teamsters are telling members it may be better to remove from the field a company set on destroying union standards, anticipating that unionized competitors will pick up some of the pieces.

A strike would “almost certainly put Hostess’ Brands out of business,” read a memo from the union’s bakery division director. “We wish we had better alternatives—but we do not.”

The Teamsters say Hostess is not seeking substantial concessions from its lenders, preferring to force takeaways from members and use that cash to repay debts. The company had already extracted a round of givebacks during a trip through bankruptcy that lasted from 2004 to 2009.

The union says it’s negotiating for “significant governance” and “significant equity,” replicating previous moves by industrial unions in their industries’ bankruptcies. The result has been to place a union representative on corporate boards and to trade wage concessions for stock, tying workers’ income to the company’s future performance.

Retired United Auto Workers activist Gregg Shotwell says both ideas have been losing strategies for workers, because neither gives them a majority stake in the enterprise. “You don’t have any control over management decisions, what’s produced, and how and where,” he said.

Shotwell pointed instead to a “work to rule” strategy he and others in the Soldiers of Solidarity anti-concessions group advocated during the 2005 bankruptcy of auto parts-maker Delphi.

Without the UAW’s authorization or involvement, some workers in some plants began to insist management make every decision and explain every task. They followed every safety rule to the letter. The disruptions slowed work enough for vulture financier Wilbur Ross to complain that the union “can’t control the individual workers.”

To quell the discontent, Delphi sweetened pension terms and transfer rights—improving on what workers would have received from the bankruptcy judge, Shotwell argues. (The company also wanted to get rid of top-pay workers and replace them with half-pay replacements under a new two-tier system.)

Working to rule has a difficult history in airlines. When mechanics at United tried to fight concessions that totaled $5.2 billion during contract negotiations in 2000-2002, United had a judge issue a temporary restraining order preventing organized resistance.

Unionists fought over whether officials should disobey, fueling a breakaway union among mechanics.

The Association of Flight Attendants-CWA has pushed a bankruptcy reform bill in Congress that would allow creditors to take the same percentage of concessions extracted from workers from compensation paid to the board of directors.

The bill, which was first introduced in 2007, would also prevent companies from leaving pension plans or retiree health benefits for executives intact if they have been chopped for rank-and-file workers.

Since 1993, AFA-CWA occasionally has employed a “chaos” strategy of unannounced strikes against individual flights, cities, or aircraft, relying on constant mobilization and the element of surprise. Very short strikes (sometimes just a half hour) are enough to disrupt a flight without risking permanent replacement.

At American, where MacTiernan says workers feel they’re “holding the bag,” coming to work every day while executives and consultants make off with millions, the mood may be ripe for action.

“They might have pushed us too far,” Owens said.

A version of this article appeared in Labor Notes #396, March 2012. Don't miss an issue, subscribe today.
Related
A Life in Transit: ‘What You Can Get Is Set by How Far You Are Prepared to Go’ »
Labor Must Rise Against Vaccine Apartheid »
Striking Massachusetts Nurses Outwait Corporate Giant Tenet »
Bay Area Transit Workers Organize for Hazard Pay, Build Toward Contract Campaigns »
Washington Mental Health Workers Win Safety Strike »