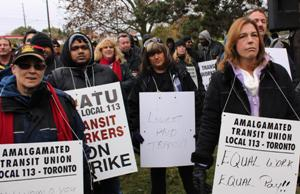 “The problem is privatization,” says Toronto-area transit union leader Bob Kinnear, so bus drivers are on strike to put that problem in front of the public. Photo: ATU Local 113.

“The problem is privatization,” says Toronto-area transit union leader Bob Kinnear, so bus drivers are on strike to put that problem in front of the public.

While passengers who ride buses in the York region north of Toronto pay the highest fares in the area, the workers get the lowest wages.

“The difference is the huge profits that are being shipped out of the country by these transnational corporations,” said Kinnear, president of Transit Union (ATU) Local 113.

The 550 ATU members on strike work for three different contractors in York. A fourth, also organized by ATU, is still on the job, having signed a contract six months ago. Management is forcing the still-working group to maintain skeleton service around the region. About a third of the routes are running, the union said, affecting service to about 50,000 riders.

The strike began October 24 when drivers and maintenance workers walked off the job. Their main issue is the huge differential in wages and benefits between York region transit workers and all others in the Toronto metro area, a wage difference of $7 to $8 an hour for workers doing the same job. Benefits in York are half as good as elsewhere around Toronto, Kinnear said.

Kathy deVos, who’s driven York buses since 2005, said she works eight to 10 hours straight, without a break for lunch or the bathroom. Her employer, the French multinational Veolia Transportation, is happy to swallow the contract’s $8 penalty if she misses a break—it’s racked up $1,700 in such fines just for deVos alone this year.

The contractors can afford the fines because they’re receiving big subsidies to run the service, the union says. York residents provide a $4 subsidy for each ride, compared to 90 cents in Toronto.

“We are familiar with the tactics of Veolia and First, companies that are regularly hired by politicians to beat up on city transit workers,” said Larry Hanley, ATU’s international president, at a November rally. “We are drawing a line. We are saying ‘no more.’”

The union avoided picket lines entirely in the strike’s first two weeks while it polled riders and pressured politicians. Kinnear said that by denying the media confrontational scenes, the union could focus attention on the contractors’ huge subsidies.

But the strategy shifted in late November and picket lines went up, as the union recognized the need to flex its disruptive power to win.

Kinnear notes that Ontario’s health and safety laws allow drivers to refuse to work in unsafe situations, which might include trying to cross a picket line.

A fast-growing and affluent area, York only introduced region-wide bus service in 2005 when it consolidated local services. The region pays for the buses and garages and writes the schedules—but parcels the service out to private contractors with claims of more coverage for less money.

DeVos said many drivers—including her—were enticed from around Toronto to join the new service. Lured by promises of sweeter pensions and holiday time, they discovered their union, ATU Local 1587, had never gotten the promises in writing.

The two locals still cooperate. In October and November, hundreds of members of both locals rallied together. Two groups of strikers belong to Local 113, one to Local 1587, while the fourth still-working group is with 1587.

Local 1587 President Ray Doyle attacked the politicians of the region for “not stepping up to the plate” in the dispute. Kinnear demanded that political leaders reconsider the decision to privatize. “They created this mess and now they’ve got to fix it,” he told reporters.

This isn’t the first strike at the York bus service. Drivers launched a two-week strike in 2008 soon after joining Local 113, against their union leadership’s advice. Members ended up taking the same deal they had rejected previously.

Kinnear says the union is better prepared this time. It has polled riders and discovered 71 percent say the dispute should head to binding arbitration—where the arbitrator must take area standards into consideration. That would translate into gains for workers and less profit for the multinational contractors.

The contractors would never agree to arbitration, Kinnear says, putting the union on firmer footing with politicians and the public.

A conservative lawmaker backed the union’s demand for arbitration November 23—while also insisting on a ban on future strikes for the transit service. The ruling Liberal party refused to support either proposal.

Toronto’s transit service already has such a strike ban in effect. Local 113 has built support for its successful campaign in the city against privatization by involving riders.

The union holds town hall meetings where front-line workers and transit riders engage in real talk about “deficiencies in delivery,” Kinnear said, and the union solicits ideas to take back to management.

Some proposals, like email alerts for service delays, came from the union, but you would never know, he said. “We advocate for it, but when the employer agrees to it, they hold a press conference like it was their idea all along,” he said.

Kinnear says the union’s long-term proposal for York is to dump the contractors.

“If contracting out is so much better, why are you paying more at the farebox, in the subsidy rate, and the worker is the worst paid?” he asked. “We’re going to ask for public transit as it should be—accountable to the public.”