Can Ohio Unions’ Rebuke To Republicans Be Sustained? 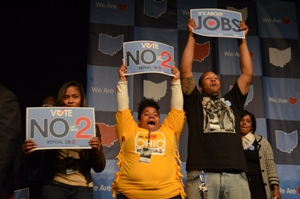 Ohio’s unions won a tremendous victory November 8 when they turned out voters to defeat an anti-union law by a 61 to 39 margin. Turnout was 46 percent, the highest in an off-year election since 1991.

The unions’ success suggests that Republican control of the state legislature and governorship is not nearly as solid as predicted.

The unions’ victory, which overturned Senate Bill 5 passed by the legislature in March, was an equally devastating defeat for Republican Governor John Kasich, who personally led the campaign for the law despite his 36 percent approval rating in recent polls.

Legislators voted up SB5 despite demonstrations by thousands of public employees and private sector workers at the Capitol in Columbus. It affected about 400,000 public employees, limiting their ability to bargain collectively, collect dues, and strike.

While SB5 didn’t end collective bargaining altogether, the law would have given management the final say because it didn’t even allow for binding arbitration. The law also established “pay for performance” and required workers to pay 15 percent of their health care. Workers were furious.

Ohio unions, working closely with the Democratic Party, acted quickly to take advantage of the state’s referendum law, collecting a record 1.29 million signatures. The state then certified 915,456 signatures, another record, putting the measure on the ballot.

The We Are Ohio coalition spent $30 million, including big investments from national unions. The National Education Association alone gave $10 million, while teachers unions in Ohio levied additional dues to help pay for the campaign.

Rank-and-file members knocking on doors and talking on the phone won this one. Thousands of members from AFSCME, teachers unions, firefighters, and many other public and private sector unions put in untold hours.

One might say there’s no arguing with success, but still we might ask what we can learn from the Ohio unions’ campaign.

In Wisconsin, Governor Scott Walker omitted police and firefighters from his anti-public employee bill this year. Kasich left them in (though many of them had voted for him in 2010), and that proved to be a strategic mistake, as the firefighters became some of SB5’s best organized and most dedicated opponents.

Some Ohio activists believe it would have been much more difficult to overturn the law had Kasich not included the uniformed forces. The public face of the Ohio campaign was a fireman, shrewdly taking advantage of the high esteem in which firefighters are held, especially since 9/11.

The “We Are Ohio” TV ads portrayed dedicated public servants providing essential services to the community. Firemen warned that the anti-union law would keep them from getting the safety equipment they need, since they would no longer be able to bargain for it. Teachers too figured prominently in the campaign, while images of clerks or sanitation workers were scarce.

As in every union struggle of recent years—but not the Occupy movement—union leaders argued that this was a movement to defend the “middle class,” a term which seemed to leave out lower-paid working people and to exclude the poor altogether.

The notion of unions as the champion of all working and poor people was perhaps implied by the slogan “We Are Ohio.” But few union officials explicitly raised the argument that it was necessary to defend public employee unions, and other unions, because unions fight to raise the standard of living of all Ohioans.

There were exceptions. “Yes, we have a budget problem,” wrote Harriet Applegate, top officer of the North Shore AFL-CIO in Cleveland, in an op-ed. “But it was not caused by the hardworking people who work in the public sector. It was caused by people just like John Kasich: the Wall Street bandits who gave themselves record bonuses in the very same year the taxpayers bailed them out.”

Looking at a collage produced by We Are Ohio, where 95 percent of the faces are white, one would never guess that 12 percent of Ohioans are African Americans, with another 5 percent Asian, Latino, or Native American. While African American public employees showed up in large numbers for anti-SB5 protests, their faces appeared less frequently in the ads.

The unions initially organized protests of thousands at the state Capitol, protests that became quite rowdy as rank and filers reacted with shock and anger. Once the signature-collecting began, the campaign toned down. The unions’ plan was to portray themselves as solid, respectable, middle-class people appealing to other middle-class folks.

When the Occupy movement sprang up in several Ohio cities in October, local central labor bodies made declarations of support but generally did not get involved, both because they had a single-minded focus on canvassing and because they feared identification with a movement perceived as too radical for the Ohio electorate. The unions were focused on defeating the Republicans in 2012 elections, not on building a social movement.

Still, everywhere in Ohio the Occupy movement stood with the unions against the law.

By and large, TV ads did not debate right-wing claims that public employees were overpaid, underworked sloths whose luxurious health and pension benefits were fleecing taxpayers.

When union officials did speak out at public meetings or to the press, they frequently borrowed a page from the employers’ script, arguing that public employee unions prevented strikes and increased productivity.

Despite the unions’ cautious message, working people brought their own perceptions to the campaign, and saw themselves under attack as well. By a 20 point margin, voters in an AFL-CIO poll taken afterward said the attack on public employees would be more harmful than helpful to wages and benefits for all Ohio workers.

The victory suggests a strengthening of the Ohio Democratic Party, which was crushed at the polls just a year ago. But given the great disappointment of labor, environmentalists, immigrant rights advocates, and others in Obama and in Congress, it will be an uphill struggle for unions to get folks to work as hard in 2012 elections as they did against SB5.

The success in Ohio forms part of labor’s recent ascending trajectory—the Wisconsin protests in February and March, the Occupy phenomenon with its populist message and alliances with unions, the Occupy Oakland march that shut the port, and now this impressive political victory in Ohio. Even if each struggle hasn’t resounded in victory, the temperature is rising.

The union movement, rallying after 30 years on its heels, is testing its strength in the streets and in the political arena. The Democratic Party is anxious to channel the new energy, both in the institutional union form and in the more amorphous shape of the Occupy movement, into the 2012 elections.

Reports suggest that the Ohio Tea Party is now trying to organize a “right to work” amendment for Ohio’s 2012 ballot. Will the rank and file stay home or come back out?

“When presented with an ominous threat that was a do-or-die challenge to the unions, we came together and fought it off,” said Linda Newman, a union member at the University of Cincinnati. “But let’s hope we did more than that.”

Dan La Botz is a teacher in Cincinnati and active in the Occupy movement. He is the author of A Troublemaker’s Handbook 1.

A version of this article appeared in Labor Notes #393, December 2011. Don't miss an issue, subscribe today.
Related
Jordanian Teachers Union Leaves Behind Legacy of Wins »
How We Turned Bargaining Around at Law360 »
Pandemic Discrimination Against Asian Americans Has Long Roots »
Draw the Line in Permanent Marker: Three Organizing Principles »
Virginia Public Sector Workers Are Organizing to Make Their New Bargaining Rights a Reality »