How Can We Solve The Jobs Crisis? 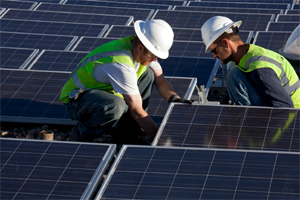 Three years into a staggering recession, Washington is finally talking about jobs. Unfortunately, Congress is stuck on pea-sized proposals that won’t dent the deepest jobs crisis since the Great Depression. What could become a new engine of economic growth? Photo: Jim West.

Three years into a staggering recession, Washington is finally talking about jobs. The Senate is set to vote on the Obama administration's $450 billion jobs package this week.

Unfortunately for the 25 million people who can’t find full-time work or have given up looking, Congress is stuck on pea-sized proposals that won’t dent the deepest jobs crisis since the Great Depression.

Even worse, most politicians and policy-makers are looking for solutions in all the wrong places, turning to tax cuts and corporate giveaways as the primary means to create jobs. This flies in the face of the lessons from the Great Depression and the track record of recent measures, most notably the 2009 stimulus package. More of the same won’t produce new and better results.

President Obama is Exhibit A in Washington’s confused approach to the jobs crisis. In his September 8 jobs speech he challenged Congress to imagine where the U.S. would be if their predecessors had balked when asked to think big.

He listed historic government initiatives: the transcontinental railroad in the 1860s, the GI Bill and the interstate highway system in the mid-20th century, and more recent support for basic scientific research that made computers and the Internet possible.

“What kind of country would this be if this chamber had voted down Social Security or Medicare just because it violated some rigid idea about what government could or could not do?” Obama asked. “How many Americans would have suffered as a result?”

Unfortunately for the president, the comparisons only served to highlight how puny his jobs proposals were. In the first two years of the interstate highway system, more was spent on construction (in today’s dollars) than on all the public spending in Obama’s jobs package.

Where Do Jobs Come From?

CEOs are rewarded for slashing jobs, not for creating them. But politicians continue to take their cues on job creation from the corporate blueprint. Union activists know the only way to create good jobs is to throw it out the window. In addition to big public programs that could lift the economy, struggle pays.

Ask Las Vegas housekeepers. Starting in 2002, they demanded in every contract to cut the number of rooms they clean per hour. The hotels had to hire, and the union wrested a slightly bigger slice of the hotel industry’s enormous profits away from its top brass.

Construction workers enforce work rules that give them breaks and lunch, and demand that people do the jobs they’re trained for, making for higher quality buildings—and more jobs. Nurses demand sane nurse-patient staffing ratios, making for safer hospitals and more nurses on the floor.

Teachers fight to keep class sizes small, leading to better learning and more teaching jobs. Teamsters at UPS push back against excessive overtime, improving their lives and forcing the company to make good on its promise—won in the union’s 1997 strike—to create 20,000 more full-time jobs.

Compared with the big talk on green jobs and renewable energy we routinely heard from candidate Obama in 2008, the recent proposals were like soggy toast, satisfying only when compared to the bile coming from presidential wannabes like Rick Perry, who called Social Security a Ponzi scheme despite its $2.3 trillion surplus.

For those who believe the government must do more to address our recession-induced jobs crisis, Obama’s speech crystallized the small thinking that dominates Washington about what government should do—and what it’s capable of.

TAX CUTS WON’T DO IT

The details of the American Jobs Act are built on principles that Ronald Reagan would embrace. Half the $450 billion package is tax cuts, and Obama assured us he’s committed to more cuts—including to Medicare and Medicaid—to offset new spending.

Because the proposals are based on a misdiagnosis of the problem, they won’t go far in solving the jobs crisis.

As the last stimulus package demonstrated, tax cuts won’t spur spending or generate the demand necessary to re-ignite growth. Individuals mostly use tax cuts to pay down their debts, and corporations add their tax savings to their already monstrous cash reserves. The vaunted “job creators” are already sitting on close to $2 trillion.

After Wall Street and the rest of corporate America were done raking in record profits last year, what money they did spend went to double-digit raises for CEOs and hefty fees for the lawyers and consultants who make sure corporations pay next to nothing in federal taxes.

Companies are not investing or hiring, and there is nothing in the White House corporate charm offensive that will change that.

In fact, Obama’s pro-corporate compass steers him in the wrong direction, as he continues the Clinton-Bush free trade policy that hollowed out 5.5 million manufacturing jobs in the last decade. Yet Obama seeks similar deals with Colombia, Korea, and Panama.

Worse, Obama’s proposals ignore the key role public dollars have played, and could play again, as a foundation for economic growth.

Most private sector innovations that conservatives love to highlight were made possible by government investment: in the electricity that powers factories, in the roads and waterways on which goods move from producer to consumer, and in the scientific breakthroughs enabled through publicly funded research, often at public universities.

Ebay and the iPhone wouldn’t exist without cellular signal or the internet, both developed by public dollars invested decades ago.

But for the last generation our political leaders have retreated from the idea that government has an essential role to play in the economy. It’s no coincidence that over the same time the U.S. economy has had no engine for growth.

Instead the economy has been propped up with unsustainable bubbles—the tech and housing booms—where almost everyone outside the top 10 percent gets stuck on a treadmill of stagnant wages, longer hours, and spiraling debt.

Government spending has been reduced to building prisons and warplanes. The poor are forgotten or locked up, and endless wars are destroying lives and prolonging the economic crisis.

A DROP IN THE BUCKET

Where Obama’s plan does point the right way, it stops way short of what’s needed.

The Jobs Act includes $50 billion to repair roads and bridges. According to the American Society of Civil Engineers, it would take more than $2 trillion just to bring them up to “satisfactory” condition.

The plan includes $30 billion to repair public schools. But a third of our 99,000 public schools are in bad enough shape to “interfere with the delivery of instruction,” says the Department of Education.

The plan proposes $35 billion in state and local aid to avoid layoffs for teachers and first responders, but that will only slow the bleeding. About 680,000 state and local government workers have lost jobs since 2008.

What could become a game-changing engine of economic growth?

The day after Obama’s speech a nuclear power plant incident blacked out most of the Southwest. The Apollo Alliance estimates that it will take $500 billion in public investment over the next decade to produce just 25 percent of the nation’s energy from renewable sources (and much more to wean ourselves from fossil fuel and nuclear energy entirely).

Governments around the world are treating broadband as a key public utility, rather than a way for companies like Comcast to make billions. Ten years ago South Korea committed $24 billion to building the country’s internet backbone, and it now leads the world in speed and access. An equal investment in the U.S. would take $150 billion.

Current and recently graduated college students carry close to $1 trillion in student loan debt—a massive drag on their spending and a potential trigger for another financial meltdown. Imagine the benefits from unshackling this generation from its huge debts, or the rewards reaped if we spent the $100 billion a year it would cost to provide free public higher education across the country. (The Wall Street occupiers understand this!)

Solutions like these aren’t going to come from the private sector, but the resources to pay for them can and should. Corporations and the rich need to pay more taxes. Their share has decreased for 30 years.

Big ideas—and a 21st century government not afraid of bold action—could create millions of jobs and build a more sustainable economic base.

Unfortunately, the will to challenge corporations has been missing from Washington for more than a generation, and now lawmakers are competing with each other to ratchet down our expectations.

It’s up to activists in the labor movement and beyond to clobber the self-defeating fiction that austerity is the road to economic revival.

A version of this article appeared in Labor Notes #391, October 2011. Don't miss an issue, subscribe today.
Related
In the Face of Mass Unemployment, We Need a 21st Century WPA »
How the Coronavirus Crisis Became an Economic Crisis »
How They're Doing It in Denmark »
A Decade of Train Wrecks: What Has Gone Wrong? »
Viewpoint: Trump, Carrier, and Corporate Welfare »