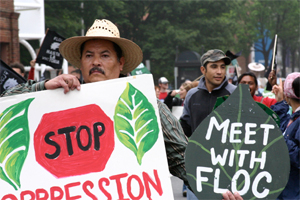 A new Farm Labor Organizing Committee report says tobacco pickers struggling to organize are stymied by fear. The report adds to years of pressure calling on Reynolds and other tobacco giants to meet with the union. Photo: Barb Howe.

An undocumented farmworker leader was deported last week, reinforcing the findings of a new Farm Labor Organizing Committee report that says tobacco pickers struggling to organize are stymied by fear.

Workers fear to ask for a drink of clean water. They fear asking for a break. They fear arrest and deportation, and they fear losing their ability to feed their families, if they’re targeted for trying to unionize.

The report was unveiled at a September rally in Dudley, North Carolina, where farmworkers and community supporters gathered with researchers, farm workers, and FLOC President Baldemar Velasquez.

Researchers conducted in-depth interviews with 103 farm laborers. During the course of their interviews one theme came up again and again: fear.

According to the report, nine out of 10 tobacco workers are undocumented, and their immigration status contributes to the fears they face every day.

All this fear means that grievances go on unaddressed and the suffering continues in North Carolina’s blazing heat. FLOC farmworkers have been pressuring Reynolds Tobacco since 2007 to come to the table and open a dialogue.

FLOC is calling for industry leaders like Reynolds to create a council that brings together manufacturers, growers, farmworkers, and their chosen representatives to address conditions in the fields.

Briana Connors, a FLOC organizer, said the union isn’t pushing for a union election or a voluntary recognition of a majority through card check at this stage.

“We have a small but growing unofficial committee of trained FLOC leaders in place throughout the fields of North Carolina,” Connors said. “They do a lot of member-to-member outreach and leadership development at the work site.”

The anti-immigrant atmosphere in the South is hindering the union’s efforts.

“Because of high turnover and the recent wave of legislative attacks on immigrants we are facing an unprecedented level of fear from the workers to organize or even voice the most basic of grievances,” Connors said. “Just last week we got the bad news that one of our leaders in Georgia has been deported as a result of a routine traffic stop.”

Every year, the union and its faith allies have held demonstrations at the tobacco giant’s shareholder meetings, with several activists making their way inside to carry protest messages to company executives.

FLOC has also targeted JP Morgan Chase, one of Reynolds’ main lenders. FLOC joined with community allies and religious leaders for nationwide protests in February, calling attention to the mistreatment of farmworkers and foreclosed-on homeowners at almost 200 Chase locations.

Auto Workers President Bob King announced the UAW had divested hundreds of millions of dollars from Chase last year in solidarity with farmworkers.

Phillip Morris and British American Tobacco, which owns 40 percent of Reynolds, agreed in May to meet with FLOC workers and organizers. The date of that meeting is still to be set.

“We know the pressure is working and now it’s just about making sure we get concrete commitments out of these meetings,” Flores said. “We’re changing how the tobacco giants do business.”

Related
Immigrant Textile Workers Win Long Strike Against 84-Hour Work Week in Italy »
Mexico’s Only Independent Farmworker Union Struggles On Despite Obstacles »
Billionaires Can Have the Cosmos—We Only Want the Earth »
Los Deliveristas Speak: How Delivery Workers Are Organizing to Take On the Apps »
Don’t Compromise on Farmworker Rights »