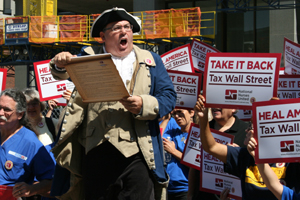 Thousands of nurses and supporters descended on their local Congressional offices nationwide Thursday, demanding Wall Street pay for the crisis it created. In Boston, a town crier in colonial dress read an indictment of Wall Street’s sins against the country. Photo: NNU.

Thousands of nurses and supporters descended on their local Congressional offices nationwide Thursday, demanding that Wall Street pay for the crisis it created.

The 60 protests in 21 states targeted both Democrats and Republicans, with austerity champions like Eric Cantor of Virginia and Michelle Bachmann of Minnesota singled out for special attention. A blockade outside Cantor’s office forced his staffers to meet with a delegation, a request they had repeatedly refused.

Soup kitchens outside Congressional offices highlighted the devastation wrought by the economy’s collapse and worsened when politicians rip into social programs. Hundreds lined up outside Democratic leader Nancy Pelosi’s San Francisco office to receive a meal.

Katie Oppenheim of the Michigan Nurses Association joined a group that served a meal in Jackson. When the nurses attempted to talk with Republican Tim Walberg, the receptionist would speak with them only from behind her bulletproof glass.

“This is one more fight among many in the country to convince corporate America we will not back down,” said Oppenheim, who chairs the professional nurse council at the University of Michigan health system.

National Nurses United led the demonstrations, the latest leg of the union’s campaign for a “Main Street Contract.” The nurses are calling on politicians to enact the contract in order to stimulate the economy and get people back to work. Its centerpiece is a half-percent federal tax on Wall Street transactions, which the union says could generate up to $350 billion a year. (Stock and bond transfers and derivative trading would be targeted; common transactions like 401k contributions would not.)

“This is a sales tax on the business Wall Street does,” said NNU co-president Jean Ross. “It would disincentivize the extreme gambling they do.”

The union sees that money as a down payment on all kind of priorities: keeping millions of people in their homes, funding schools, restoring environmental protections, providing Medicare for all, and bolstering Social Security.

The figure would also represent about a quarter of the savings the Congressional debt-cutting “Super Committee” is charged with reaching.

The idea is popular overseas, already in place in 15 countries and likely to spread further. Conservative governments in both France and Germany have signaled they will propose it to the European Union this month.

Thursday’s protests pointed out one reason why members of both parties in the U.S. are more interested in tightening belts around working people’s already-thin waistlines than they are in taxing Wall Street: Wisconsin Republican Paul Ryan and Colorado Democrat Michael Bennett have both taken $2.4 million in contributions from Wall Street since 2000, for instance.

In Boston, a town crier in colonial dress turned heads in a busy downtown square as he read an indictment of Wall Street’s sins against the country, surrounded by nurses in their Massachusetts Nurses Associations scrubs.

Betsy Prescott, a nurse at St. Elizabeth’s Medical Center in Boston, said the attention-grabbing tactics are an effective part of a larger education strategy. She cited the California nurses’ Queen Meg campaign, which sent a regal actor out to dog ex-Ebay CEO Meg Whitman when she ran for governor last year. The actions reframed Whitman’s run as a coronation she was attempting to purchase with her millions (she lost).

NNU secretary Martha Kuhl, who is locked in a long fight against health care concessions along with fellow nurses at Oakland’s Childrens hospital, said the nationwide actions help answer critics who say, “I’m suffering, why shouldn’t you?”

“Instead, we can say, let’s stand up together,” Kuhl said. “Everybody deserves what’s in our Main Street Contract.”

Prescott said she joined the protest because the woes are too big to ignore: Her hospital is laying off transporters who move patients to and from units, while it’s hiring into its corporate offices. Pleading poverty, Massachusetts is considering limiting elderly patients’ access to hospital beds. And a family friend is foregoing breast cancer medication because she can’t afford it.

“If we expect to be able to do our job, taking care of the sick and sending them home to get better, we have to heal the society,” Ross said.