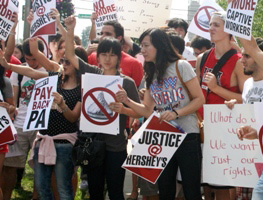 Students who were promised a "cultural exchange" in the U.S. protested horrible working and living conditions imposed by a Hershey Co. subcontractor. Photo: Roman Surzhko.

Last month 300 student-workers from overseas went on strike at a Hershey plant in Pennsylvania. The workers were mostly 18- and 19-year-olds who had come to the U.S. as part of a cultural exchange program, known as the J-1 visa.

Instead of English lessons and travel, they ended up isolated in a remote area, working the night shift in often dangerous conditions, and having exorbitant fees taken from their meager paychecks.

I traveled to Hershey as part of a delegation two days after the strike. Our group of experts in worker rights, human rights, and international labor was invited by the National Guestworker Alliance. We interviewed students, visited a worker’s apartment, and talked to local union leaders and NGA staff.

For the last decade, I’ve been meeting workers around the world in low-wage work and poor working conditions. And yet I was still shocked by what I learned in Hershey. The students we interviewed each seemed upset about a different aspect of their situation.

For one young woman from China, the greatest injustice was that she was forced to share a small one-bedroom apartment with four other people: two women from China and a young man and woman from Poland. Students were housed regardless of gender, language, or even shift worked, so the students on third shift had to sleep in the living room while other students were preparing dinner in the kitchen beside their bed.

Most shocking to me was that each student had to pay $400 a month to live in this set-up, netting the company $2,000 taken straight from their paychecks. Rents for similar one-bedroom apartments in the area were going for $600 a month.

Other students were most upset about the rigorous working conditions. They were pushed to work harder and faster, lifting 50-pound boxes of chocolates and stacking pallets above their heads, averaging 60-70 pallets a day. The work was often dangerous. One student said she fainted at work; another said she had to dodge forklifts while wrapping pallets in plastic.

Some students tried talking to management and to the agency sponsoring the program (the Council on Educational Travel/USA) about moving to cheaper housing or getting a better job, but they were repeatedly rebuked and even threatened with deportation.

NO WAY TO TREAT A GUEST

The Summer Work Travel program was originally fashioned during the Cold War to promote America to foreign students. Now it annually accounts for 130,000 college students, in low-wage jobs, while another 200,000 J-1 visas are issued to workers in year-long trainee and intern programs.

Unlike in other guestworker programs, J-1 employers don’t have to advertise their jobs locally to show that Americans don’t want them, and there is no limit on the number of J-1 visas issued.

When students began organizing, they were told not to speak to the NGA and some were told it was illegal to strike in the U.S. Others were warned that if they protested they would not be allowed back into the U.S. in the future.

Hershey’s subcontractor has said it will no longer use J-1 students to fill the jobs, and Hershey offered the students one week's paid vacation to allow them time to travel. But the students say these concessions are not enough. They say the jobs should be made into living-wage jobs for local residents, and they want Hershey to agree to end exploitation of student workers.

Some of the work the students do used to be union, Diane Carroll, secretary-treasurer of the Confectionery Workers union (BCTGM), told Labor Notes.

But Hershey used subcontractors to run the plant, avoid the union, and maintain an ever-changing supply of student workers.

Hershey has not responded to the students’ demands.

The U.S. State Department and Department of Labor, along with OSHA, are conducting an investigation into the case. Some students have returned to work but are insisting on a safer pace and are ready with logbooks to track any violations.

Thirty students are traveling around the country with the National Guestworker Alliance to speak about their experience and engage in rallies with United Students Against Sweatshops, Jobs with Justice, and a range of unions. Our delegation’s report is here.