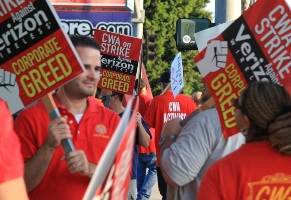 CWA Local 9510 rallied in southern California August 17 in support of the strike. Photo: Unity at Verizon.

After 15 days on strike, 45,000 Verizon workers marched in to work on Tuesday after extracting an agreement from their stubborn employer to bargain. The Communication Workers (CWA) and Electrical Workers (IBEW) will be working under their old contracts while talks continue. They agreed not to strike again for 30 days.

During the strike, which stretched from Virginia to Massachusetts, Verizon was unable to provide timely installation and repairs, and reports of outages plagued the company. In addition to pickets at hundreds of worksites, unions and community groups picketed over 1,000 Verizon Wireless stores, say union leaders.

The end of the strike was greeted with mixed feelings. While most strikers are relieved to return to their jobs, many calculate that going back without a new contract will take the pressure off and that Verizon will go back to its old tricks.

“We all felt the power we had while being on strike,” said Erin Small, a shop steward in New York’s CWA Local 1101. “I am afraid of losing the energy we had. We were obviously having an impact on how much work the company could get done.”

Even members who were happy to go back to work worried about the long-term impact.

“People I’ve spoken to were not pleased we were going back under the old contract,” said Anita Matthews, a central office technician and shop steward in New York. “We should have stayed out till we got a contract and we would have gotten what we wanted.”

“Ideally, under better conditions, we’d have a contract,” said Rich Corrigan, a shop steward and picket captain in Manhattan. He described himself as “cautiously optimistic.”

“We remember the last time we stayed in,” Corrigan said, during the 2008 contract fight. “We stayed working and got a very good contract.”

Chris Shelton, Vice-President of CWA District 1, said, “If they don’t keep their word, we have the option to go out again, only it’ll be a lot worse because it will mean we’re out on strike until we get a contract.” District 1 includes 327 CWA locals in the Northeast.

CWA President Larry Cohen called the strike unique because “we struck for real bargaining rights, for the company to bargain seriously.” He compared the strike to public workers fighting for their rights in Wisconsin and said the plan had been to “go back into bargaining when the talks could be meaningful.”

The company has agreed to take certain concessions off the table, CWA officials said. “That’s not a victory, per se,” Cohen told a members’ conference call Sunday after the agreement was signed.

Besides agreeing not to strike again for 30 days, CWA agreed to lift a cap on overtime limits for seven days. In reaction, Rebuild 1101, a reform caucus in CWA Local 1101, wrote: “Our strike, management incompetence, and the weather caused a huge backlog for Verizon. We shouldn't be helping to bail them out while we're still without a contract.”

Asked whether it was the right time to end the strike, Cohen said, “Collectively we decided, we stick to what we said at the beginning of this.”

“This was the announced strategy from day one,” said Rand Wilson, former organizing director for a Massachusetts CWA local. “It is risky, but there’s risks being out on strike, too.”

Union workers are down to 30 percent of Verizon’s workforce, as the company has crushed organizing drives on its growing wireless side, even closing three facilities to quash organizing efforts. Only 70 wireless workers belong to CWA and were therefore on strike, but that fact made it legal for the union to picket wireless stores everywhere, as the wireless division was in fact a strike target.

Without those unionized wireless workers, CWA officials noted, the union would have run afoul of draconian labor law designed to prevent solidarity by banning picketing or boycotting of “secondary” targets.

Those 70 wireless employees may be targeted by management to eliminate their unit or otherwise get rid of them. “Management knows it was a bridge to picketing 1,000 wireless stores,” said Cohen. But he also said that during the strike the union fielded more than 100 calls from wireless side workers, asking how they could get a union.

GET RID OF UNION WORKERS

Laura Randall, a landline shop steward in New York, said her co-workers are very aware that Verizon wants to get rid of them: “They don’t want union employees doing the work."

“A lot of us were concerned, the longer we were out, the easier it is for Verizon to move our work around while we were on the picket line.”

She said that her work could be moved to Texas, and once it’s moved, “it’s a lot harder for us to get it back.” Randall hired in 11 years ago and is still at the lowest seniority rung, she said, because Verizon is not hiring.

“A lot of us thought we were never going to go back, potentially going to be replaced forever,” said Rich Corrigan. Even knowing that, he said, “all were willing to stay out one day longer.”

Eighty workers have received discipline letters for conduct alleged during the strike; the company has suspended them.

In Salisbury, Maryland, Paula Vinciguerra, president of CWA Local 2106, received a suspension letter after she sat down with an IBEW member in front of a truck driven by a scab who had crossed the line several times. She said they were arrested, shackled, and treated like criminals. “I’m 60 years old and I’ve never been arrested; it was quite an experience,” she said.

CWA leaders pledged to fight every discipline letter, taking the issues to the bargaining table if necessary. Rebuild 1101 noted in its statement, however, that according to the back-to-work agreement, that discipline is exempt from arbitration.

When the agreements between the bargaining team and Verizon were signed Saturday afternoon, the unions sent out word that mobilizing activities should cease. But in a conference call Sunday, CWA Vice President Ron Collins retracted the statement. “The only thing the agreement did stop was picket lines,” he said. “We’re going back to work, but that did not stop the mobilization.”

Picket lines at Verizon Wireless stores allowed groups from Florida to Hawaii to adopt stores and tell the public the story of the strike.

“The pickets at the wireless stores, leafleting, flash mobs, was probably the most strategic aspect of the strike, driving the company crazy,” said Wilson, who currently coordinates campaigns for the AFL-CIO. “The key to making the strategy work is to resume a very robust contract campaign.”

While pickets have come down, CWA today encouraged allies who have adopted a Verizon Wireless store to continue to pass out leaflets and try to convince people to shop the union alternative, AT&T. They also plan to leaflet at Verizon authorized dealers and at Apple stores as the new iPhone is rolled out in a few weeks and to target college campuses to stop the flow of new Verizon Wireless subscribers.

“However disappointing it is to go back to work without a contract, I think we can make the most of this shift in strategy,” said Small. She noted that the union tried an inside strategy when the last two contracts expired.

Wilson said the strike is a tremendous opportunity to organize such a campaign when everyone’s fired up: “As in any strike, it’s an incredibly politicizing and consciousness-raising event.”

“Our job is to make the most of the momentum and relationships we built while on the picket line. The more organized we are the more effective we can be,” said Small. “That is true whether we are out on strike or inside working.”

Jane Slaughter contributed to this piece.