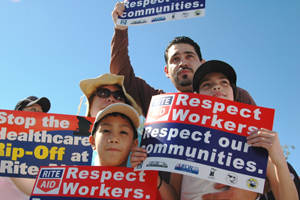 It’s all part of a cross-union effort to defend health care and union rights at the third-largest drugstore chain in the U.S.

Across the country, union activists say, Rite Aid has been pushing sharp health care cost increases. Rite Aid has been trying to pry workers out of their union’s health plan and shove them into a more expensive company-run plan. Workers call it a “scam.”

Retail workers at six stores in Cleveland have been on strike since March 14, charging the company with intimidation, as endless bargaining over health care in 25 stores has bogged down again.

Rite Aid owns 4,800 stores around the country, but the company is reeling after it racked up debt executing a disastrous merger with rival chain Brooks Eckerds in 2006.

Five hundred Rite Aid warehouse workers in the high desert town of Lancaster, California voted in the Longshore and Warehouse union (ILWU) in 2008, and have been trying to nail down a first contract for almost three years.

The first year, “They just toyed with us,” said bargaining team member Chico Rubio, who sorts merchandise as it arrives at the warehouse. The company hoped to decertify the union, but when that went nowhere, managers called in a mediator.

Two years later negotiations have come down to nuts and bolts, Rubio said: health care, wages, and contracting out. Management wants to narrow workers’ health care options and increase premiums 35 percent even though its costs have increased only 3 percent.

Workers would lose money on the contract, because jacked-up health costs would overwhelm the tiny raises the company is offering, Rubio said. He’s paying almost $300 a month already for family coverage.

Dozens of fellow ILWU members marched into two Rite Aid stores in San Pedro April 1, near where they work at the Port of Los Angeles, and pulled their prescriptions in what organizers called a “pinpoint boycott.”

Several dozen more have moved their medications since the boycott’s April 1 kickoff, according to Craig Merrilees of the ILWU.

The union’s members and their families hold 17,000 prescriptions worth around $2 million in the two San Pedro stores, said ILWU organizer Peter Olney. The union calls the tactic “strip the scripts.”

The message to the company is, “Union people are making you money,” Rubio said. “They have to respect us at some point.”

The union is not calling for a general boycott of Rite Aid, which would just be “lost in the ether,” said Olney. They say they’ll return the prescriptions when the labor disputes are settled.

Health benefits are also the main issue in Cleveland. The striking workers are covered by a Food and Commercial Workers (UFCW) union plan jointly managed with the company. The company is trying to dump them into the more expensive Rite Aid plan.

Some of the Cleveland retail workers make so little that they couldn’t afford the premiums in the company plan, the union said. They would have to seek government assistance like Medicaid to maintain coverage.

After 10 months of bargaining, workers struck six of the 25 stores in negotiations, citing intimidation of union members at the stores. Workers had been interrogated about their views on the contract under negotiation, and said their jobs were threatened if they planned to vote against the contract, according to an NLRB complaint.

Pickets are asking patrons to move their prescriptions to unionized pharmacies nearby.

Management publicly brushed off the effect of the strike, but while in court asking a judge to stop the pickets, Rite Aid District Manager Brian Pellman admitted one store experienced sales losses of 17 percent the first week of the strike and 30-35 percent the second week. He also said the store is losing 100 prescriptions a week.

Rite Aid’s workforce is about 30 percent organized, but it’s represented by five different unions and two labor federations. Bringing them together is a goal of AFL-CIO’s Rand Wilson, who has been crisscrossing the country, making connections and creating a network, Rite Aid Workers United.

UFCW Local 880 and the ILWU have sent members to each other’s negotiations and protests. Jobs With Justice chapters and United Students Against Sweatshops have joined demonstrations.

“The company is vertically integrated in terms of labor relations,” Wilson said of the Pennsylvania-based firm. They can look at the whole picture and pit different groups of workers against each other. By contrast, he said, the workers have been fragmented, “with no overarching view of the company or shared strategy.”

As a result, some retail workers have taken health concessions in their contracts.

Rite Aid management wants workers out of the union’s health care plan both to make money and to drive a wedge between workers and their union institutions, Wilson said.

If Rite Aid pays into a union plan to insure its workers, then its contributions are transparent, explained the ILWU’s Olney. But in Rite Aid’s private plan, the company takes in premiums from the workers and pays out health care bills, making it harder to see how much the company actually contributes.

Union organizers hope the six-store strike will set a tone that workers aren’t going to take these concessions. Contracts expired April 2 at another 35 stores in Akron, Canton and Youngstown, Ohio. At a March 16 negotiation session, management was again pushing the company health plan.

I agree that the prescriptions should be boycotted. But, why are any unions doing any business with a company who are union busters? They should be banned all together or some of you will be out of work just like I am. Ex rite aid employee from Rome NY distribution center that rite aid closed because we were union.