Wisconsin Spirit Sweeps Across the Midwest 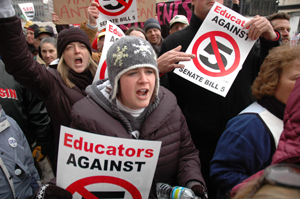 The spirit of Wisconsin is inspiring union members in Ohio, Indiana, and Michigan to jam capitol buildings by the thousands to fight a raft of union-busting bills in their states. Photo: Mike Elicson | SEIU.

The spirit of Wisconsin is inspiring union members in Ohio, Indiana, and Michigan to jam capitol buildings by the tens of thousands to fight a raft of union-busting bills in their states.

By aiming their attack against such a broad range of working people—teachers to state workers to building trades—conservative legislators and their shadowy billionaire funders unintentionally created the conditions for unity.

By making their aggression so naked, the legislators scotched the usual impulse from most labor leaders to think they could negotiate a way out behind closed doors. When the right took off the gloves, labor finally put up its dukes.

Pro-union demonstrators in Indianapolis Tuesday saw themselves as part of a national effort, as 5,000 crowded into the Capitol galleries and sat down in the hallways with signs and chants.

“Once they’re done with us they’ll come for the stronger union states," said Brian Babcock, an auto worker who rebuilds Ford seats in Hammond, Indiana. He gave up a day’s pay to demonstrate. “If Indiana, Ohio, and Wisconsin go right to work, how long before Illinois does?”

Democrats in the Indiana House walked out before the start of the Tuesday morning session, departing for Illinois. As in Wisconsin, this move left the Republican majority without a quorum to conduct business.

Indiana Governor Mitch Daniels declined to send state police to round up the legislators. He restated that now was not the right time to push the right-to-work bill, although he supports the concept.

House Democrats said they wouldn’t return until the attacks on workers are withdrawn. “Nuts,” responded House Speaker Brian Bosma, to boos by the demonstrators.

The building trades were excluded from the right-to-work bill, but trades workers were still out in force to denounce it, and to speak out against other bills the legislature is considering that would harm construction unions. (See sidebar for details of pending proposals across the Midwest.)

More protests are expected Wednesday, said David Williams of the Laborers. Williams met with other unionists from around the Midwest on Tuesday. “The overall feeling and strategy was shut this down any way we can,” he said.

In Columbus, Ohio, around 7,000 opponents of the senate bill which would end collective bargaining for state employees demonstrated for hours Tuesday inside and outside the Capitol.

AFSCME members, Teachers, Service Employees, Steelworkers, Teamsters and others stood in the 30-degree temperatures outside the building for hours, lined the staircases, and crowded into the hearing rooms and hallways.

“This affects our loved ones, our family, and our community members,” said Josh Kramer, a firefighter in southwest Ohio. He arrived with 10 co-workers, among a big contingent of firefighters who showed up in their gear, helmets and all.

Most teachers joined the protests after school. Dan Smith, a 14-year teacher at a middle school in Lakewood, Ohio, near Cleveland, said, “This is a step that would destroy our collective bargaining rights, lead to privatization, and make us all part of one big corporation.”

In Lansing, Michigan, the numbers were smaller Tuesday —perhaps 1,000—and the action was billed as a “lobby day.” A second day of actions was planned today.

Ruby Newbold, president of a school office employees local in Detroit, said, “I hope that we do multiply until we get to the point where we look like Wisconsin.” She noted that Governor Rick Snyder’s package of bills and takeaways would “hurt everybody.” Her members in particular feared paying taxes on their already small pensions.

AFSCME, the union of public employees, says its average member earns less than $45,000 and receives a pension of about $19,000 per year.

Members of the United Auto Workers came out in numbers in Michigan. “We’re beating up the wrong people for the wrong reasons,” said one, at a lobby meeting in the office of Republican Deb Shaughnessy.

David Counter, a union plumber from Lansing, was outraged by the proposal to eliminate the earned income tax credit for low-income people when state leaders are considering tax breaks worth $1.8 billion for corporations.

“Poor people can finance giveaways to the corporations, on just the hope that they’ll create jobs?” Counter asked. “There’s no guarantee. On the backs of the elderly and poor people? I don’t think so.”

The biggest fireworks in Michigan came when a committee held hearings on a bill to repeal Project Labor Agreements, which guarantee union standards and wages on state-funded construction jobs. The committee permitted only construction management and a right-wing think tank to testify.

A hundred building trades workers gathered in a nearby room and their call—“Let us speak!”—thundered through the hallways.

But leaders of the building trades unions didn’t motivate members to join in the other actions under way around the capital, leaving the impression that the trades were focused on only the issues that affect them directly.

When Labor Notes caught up with an official in the state’s building trades council, he said he “hadn’t had time to pay attention” to the assaults on everyone else and defended Republican Governor Rick Snyder as someone who “doesn't want to cut his way to prosperity.”

Teachers, who have been the backbone of the resistance at the Capitol, returned to work Tuesday at their union’s urging. But observers noted parents marching around the Capitol yesterday carrying signs that said they were protesting in place of their children's teacher.

The Madison-based South Central Federation of Labor endorsed a call Monday night for a general strike. It could take place the day Walker signs his "budget repair" bill, if that happens.

Recognizing that more than a simple call would be needed to pull off such a momentous action—which hasn’t been endorsed by other labor bodies as of yet—the federation made educating affiliated unions and members on the organization and function of a general strike its focus. A committee began contacting European unions to learn how they have come together to pull off a wave of huge one-day strikes in recent months.

Unions pledged that essential services would continue uninterrupted during any strike, and told Madison’s Capital Times they’re evaluating which government functions are crucial.

While Democrats in Wisconsin’s senate are still blocking passage of the bill that would essentially end collective bargaining—by refusing to grant Republicans a quorum—the state assembly is considering the bill. Democrats there have prepared about 100 amendments to slow the legislation down.

Senate Republicans have threatened to take the anti-workers’ rights sections out of the bill and vote for them separately. That would remove any need for the Democrats’ participation, because only fiscal legislation requires a quorum. Republicans appear to be hesitating to take such a step, since decoupling union rights from the “budget repair” bill makes it clear they’re simply interested in an undisguised attack on unions.

The AFL-CIO released polling of Wisconsin voters showing 67 percent support public employees in the showdown in the Capitol.

Howard Ryan contributed to this piece.