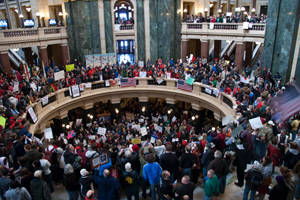 Related
‘No Contract, No Matisse’: Philadelphia Museum of Art Workers Win First Contract After Strike »
After Strike Threat, Wisconsin Nurses Get a Possible Path to Union Recognition »
Wisconsin Nurses Set to Strike, As Employer Claims It's Banned from Bargaining »
Open Bargaining Brings the Power of Members to the Table in Berkeley »
New Jersey Welfare Workers Sound the Alarm on Safety »