Egypt: ‘Our Ability to Resist Is Our Guarantee’ 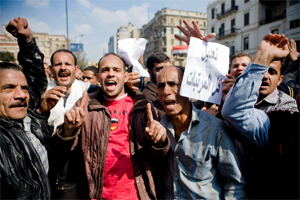 Striking telecommunication workers attend mass protests in Cairo's Ramses Square. What will happen now that protesters (including tens of thousands of strikers) have brought down the regime? "We are going to take five minutes and celebrate, and then we will start building our new Egypt," said a teacher unionist. Photo: Hossam el-Hamalawy.

Shortly after the news came that Egyptian President Hosni Mubarak had resigned, Labor Notes talked with teacher unionist Abdel Hafiz in Cairo, amid sounds of joyous celebration. The regime's collapse came amid a massive series of strikes this week.

“Everyone wants to be in control now. We know tomorrow there will be a big debate in Egypt about the future, about how in our new Egypt we will have democracy and civil rights.”

What about the military being in charge—is this a good thing or dangerous?

“The military promised to be in charge for the foundational period and to guard the democracy. They know that from the first day the military, the army, came to the streets, people are celebrating the military coming. They were shouting every day, every day, ‘The army and the people is one hand!’

“The military got the message. They know the requirements of the new Egypt—freedom and democracy. They promised and we believe them. Of course, everyone will be very careful.

“They’re now just feeling they have their own ability to resist and that is the most important guarantee.”

BROKE THE CAMEL'S BACK

As Egyptian citizens celebrate their first victory on the way to democracy, some are asking whether the fast-spreading strikes of February 9-11 were the straw that broke Mubarak’s back.

More than 20,000 workers walked out on February 9. Kamal Abbas, director of the Center for Trade Union and Workers Services in Cairo, told Labor Notes, "This day in the revolution could be named for the labor unions."

On Friday morning, the day Mubarak stepped down, the AFL-CIO Solidarity Center reported, based on local reports from Egypt:

In Mahallah 24,000 textile workers walked out demanding raises and calling for solidarity with the protesters in Tahrir Square.

Some military equipment factories, owned by the military, were struck over wages and benefits.

Subway workers walked out. Postal workers walked out. Workers at Egypt Air headquarters walked out. Laid-off workers from the famous Alexandria Library demanded to be rehired. The main shipping agencies in the ports saw walk-outs. Al Azhar, the oldest university in the world, saw strikes at all the hospitals it operates.

And employers rushed to meet the demands of workers. Public and private employers were all caving on the major demand that temp/contract workers be made permanent. The government began studying budgets to figure out how to make temps permanent throughout the government sector.

Leaders of the official government-controlled union federation, the Egyptian Trade Union Federation, were not involved in the strikes and negotiations. Workers were ignoring the existing structures and forming their own committees to negotiate.

They had ample precedents. Though invisible outside the country, more than two million Egyptian workers had struck, sat down, and protested for higher pay since 2004, when a neoliberal government stepped up privatization.

Related
George H.W. Bush: Not So Civil After All »
Labor Notes: Making Trouble for the Bosses Worldwide »
Honduran Unionists Back Presidential Election Recount »
From Indonesia to Honduras: How Anti-Sweatshop Activists and Unions Made Severance Pay Mandatory »
Letters: Readers React to Criticism of 'Buy American' Campaigns »