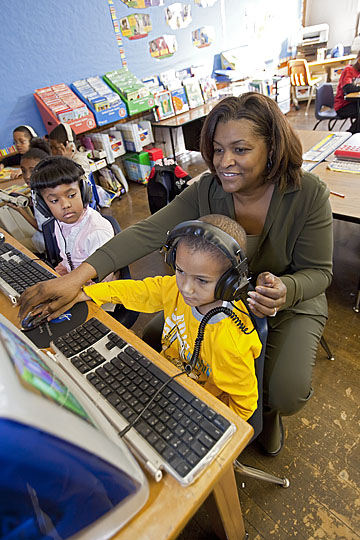 Education “reform” is dominated by a privileged few who seek to change schooling from a public service to a lucrative business. Photo: Jim West.

The public conversation around education “reform” is dominated by a privileged few who seek to change schooling from a public service to a lucrative business.

Millionaires and billionaires, such as Bill Gates, Eli Broad, and the Walton family, owners of Wal-Mart, have spent years pouring hundreds of millions of dollars into think tanks and political campaigns.

They have captured the media through projects like the movie “Waiting for Superman” and NBC’s “Education Nation.” Their intent is clear: to gain control of public opinion and public policy and open up access to what they refer to as the K-12 “market,” namely, our schools.

Two years ago I faced the billionaires’ agenda head on when my Triple A-rated public school was forced to give up part of our building to a privately run education corporation, commonly called a charter school. The charter was founded by the son of billionaire hedge-funder Julian Robertson.

As I watched our needy students, many of them with special needs, forced into shared classrooms, hallways, and closets, the intent became clear. Undermining public schools is part of a 30-year ideological offensive that says government services are inherently inferior, private industry will produce better results, and public sector unions present an obstacle to good services and rob taxpayers with over-generous salaries and pensions.

The education “reform” agenda cloaks itself in the language of the civil rights movement, but in truth the reforms would make conditions worse, particularly for children of color.

Until now, public officials have been responsible for providing a free and fair public education for all children. If our most important public resource is left in the hands of private interests, children are left without the protections government and unions provide.

One of the dangers is rampant discrimination. Charter schools across the country use selective enrollment to routinely turn away children with special needs and those learning English as a second language. They avoid serving the homeless and those in foster care or receiving reduced-cost or free lunches.

In addition, charter schools largely have prevented their workers from organizing. Their ability to fire employees for any reason prevents educators and staff from advocating for the children.

Of course, real challenges do face our public schools: underfunding, overcrowding, and the social problems that weigh on student learning, especially in low-income communities. How do the “reformers” propose to address these problems?

First, get rid of “bad teachers,” because, after all, “good teachers” can overcome any problem.

To do this, ensure “accountability” with standardized tests as the measure of student and educator performance. Control what educators teach by standardizing curricula in alignment with the tests.

Parents and educators across the country complain that this focus has routinized students’ work and limited meaningful experiences. Often children are subjected to hours of standardized testing.

Next, link teacher job security and pay to test scores, which are used to identify teachers and their schools as failures.

Once a school is considered failing, close it and replace it with a charter that picks and chooses the best students and leaves the rest behind.

The charter school will rely on inexperienced, under-trained teachers through programs such as Teach for America. These overworked and under-supported teachers seldom have union protection. Less than half stay in the profession beyond two years.

The result of high turnover is low wages—saving the charter company money on salaries and pensions. Teaching morphs from a secure, stable job to a high-turnover, low-wage one.

In New York City, for example, half the teaching force leaves before reaching five years in the classroom. Leaving students without experienced educators damages their achievement.

The billionaires’ agenda also includes a three-pronged strategy for gaining control of school governance: mayoral control, which has been devastating in both Chicago and New York City; funding school board takeovers, as in San Diego (now reversed); and funding fake parent groups.

“Parent Revolution” in California, for example, is funded by the Broad Foundation. It supposedly includes active parents in Compton, but is really run by a Beverly Hills lawyer with paid organizers.

All the while, teachers and their unions are attacked as the obstacle to all of the above. Non-union charters are promoted as the solution.

Focusing all the attention on teachers conveniently ignores the lack of equitable funding for schools, caused by state and local tax structures that tilt toward the wealthy. The crying need for more money for schools is sidestepped by cutting student services and teachers’ pay.

The need for policies to address poverty and other social factors that contribute to a child’s failure or success in life can be ignored, because the mantra is that educators are solely responsible for a child’s learning.

It’s no coincidence that those fueling and funding school reform are millionaires, billionaires, and large corporations. To believe that their interest lies in helping children would require a suspension of logic and a denial of our history.

Julie Cavanagh is a special education teacher in Brooklyn and is active with the Grassroots Education Movement, a group that educates and mobilizes teachers, parents, and students.

A version of this article appeared in Labor Notes #383, February 2011. Don't miss an issue, subscribe today.
Related
Soak the Rich, Now More Than Ever »
Viewpoint: AFT's Refusal to Challenge Democratic Establishment Leaves Every Teacher Behind »
Collective Action Is How We Shake Ourselves Free of Pandemic Isolation »
School and Campus Workers Say: Not Until It's Safe »
Somerville Paraeducators Win 20 Percent Raise and Permanent Status After Nine-Month Battle »