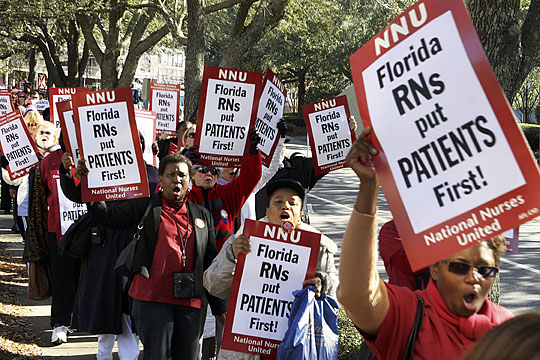 Thousands of health care workers in Florida could unionize this fall as a result of neutrality deals. Photo: Hilda Perez.

Ramiro Castillo, racing through his 12-hour shift as an intensive-care nurse, needed a snack and stopped by a conference room where the union had a spread. Lavaughn Renner got a flyer in the mail telling her a union was coming to Texas. Lizzette Lopez’s mom encouraged her to channel frustration into organizing.

None of these nurses considered themselves linchpins of a new strategy to organize health care workers. But in joining National Nurses United (NNU), these three nurses—and 1,900 more who unionized with them at five for-profit Healthcare Corporation of America hospitals in Texas—reinforced the belief among many unions that neutrality agreements which take the employer off the field are the future of organizing.

Another 1,500 nurse aides, techs, housekeepers, and other staff organized at four of the same hospitals this summer with the Service Employees, as part of a similar neutrality deal with HCA.

Now the two unions have launched a bid to extend their gains, taking a run at seven HCA facilities in Florida through the New Year. Each union could add around 2,000 more members.

The neutrality pact at HCA was the fruit of a years-long corporate campaign and bargain-to-organize strategy run by SEIU and the California Nurses, the biggest union in the 155,000-member NNU. The unions’ cooperation was also the end goal of a truce SEIU and CNA hashed out last year to settle their war over organizing jurisdiction that had boiled through the last half-decade.

SEIU has organized thousands of HCA workers in California and Florida through such arrangements in recent years, but its willingness to sign secret side agreements alongside its neutrality deals has stoked controversy.

Under their agreement with HCA, the unions have a 75-day window in each campaign to collect a majority of cards and trigger an NLRB-supervised election. They have limited access to conference and break rooms in the hospital. Managers are not allowed to campaign against the union, and violations are rushed to an arbitrator, who issues a decision within three days of a dispute.

HCA nurses have reported a few management breaches. Tardiness policies came into force all of a sudden during one drive, while other managers tried to shut down “visibility events,” like wearing the union’s pins or red scrubs.

Still, one nurse fired during the campaign was back on the job in a month.

To get a mostly neutral boss, the unions agreed to some limitations. The deal stipulates the location and number of facilities they’re allowed to target, the timetable on which they can be organized, and an agreement not to disparage the employer, in the facilities or in public. That means the unions’ earlier corporate campaign tactics that brought HCA to the table are now off-limits.

The nurses’ agreement says the contract that parties eventually bargain must include a 10-day “cooling-off” period before any legally required 10-day strike notice is served.

Although a majority of workers voted the unions in, many are apparently waiting to see what will come of bargaining before they decide whether to join the union. Lopez’s El Paso hospital reached majority membership among nurses in mid-October. Other hospitals in the right-to-work state hover around 35 percent.

Organizers expect they’ll face decertification attempts by the employer, much as the NNU did last year at the Cypress Fairbanks hospital in Houston. That shop was organized as part of another deal, with the Tenet health chain. The union defeated the decert and settled its first Texas contract this summer.

The HCA organizing is spread widely. Votes in Kansas City HCA hospitals this fall added 915 members to SEIU’s ranks and 600 to NNU’s.

Previous neutrality deals SEIU has struck with health care, food service, and nursing home chains have been criticized for creating “template agreements” that pre-arrange weak benefits, bar strikes even after the contract has expired, and prevent workers from speaking up about patient safety.

“There is no template on bargaining, and no concessions,” said Ed Bruno, who heads the NNU’s campaigns in Texas and Florida. “Bargaining will be what it always is, a relationship of power.”

Critically, SEIU’s organizing deals with HCA have also been governed by secret “labor relations accords,” side agreements to the election procedure.

One such accord, signed in Florida in 2006, agreed to “convene a national-level panel to resolve the contract”—noticeably omitting any mention of the union’s right to strike. The panel would be under the control of the then-head of SEIU’s health care division.

A new accord bargained in 2007 for SEIU members at HCA in California guaranteed the right to strike and made the terms public.

But the latest incarnation of this deal has gone back under wraps, out of the view even of rank-and-file members on the HCA bargaining team in California. Arthur Fox, a union democracy attorney, says the secrecy surrounding these side deals hamstrings members by dramatically limiting their rights.

“Assuming these agreements do exist, SEIU has maneuvered its members into a sort of Kafkaesque conundrum,” he said. “As long as the agreements are kept secret by SEIU, the members are effectively deprived of the information they would need to file lawsuits alleging specific injury to their rights and requesting specific remedies from SEIU and, very possibly, their employers as well.”

SEIU members, of course, have the right under their union constitution and labor law to participate in the union’s bargaining efforts and to approve union contracts. Whether they can claim those rights is another matter.

The HCA drive won a union for thousands of workers in the notoriously anti-union South. But in some ways the real work remains ahead.

Can a local where members feel invested (and well-represented) be built, when facilities are spread out 14 hours away from each other? When the union can’t openly take on the boss?

Even if a contract is achieved, how will members control their union, if the deals are made at the top, and exhausted staffers constantly on the move essentially control events?

“Getting the union was like giving a 16-year-old a car,” said Lavaughn Renner, the nurse from Corpus Christi. “If they don’t have to work for it they don’t know what it means.”

Like it or not, organizing that doesn’t rely on the National Labor Relations Act is increasingly common. In a study for the Economic Policy Institute last year, Kate Bronfenbrenner of Cornell University reported that the number of union elections run through the Labor Board has dropped by half in the last decade, falling to 1,500 by 2007.

The neutrality model may produce impressive membership growth, but organizers worry what kind of unions are left behind after quickie campaigns.

“We had the beginnings of committees, but there wasn’t a lot of time to test the committee,” said Karleen George, who’s leading NNU’s Texas bargaining. “The fights that strengthen your committee didn’t happen during the campaign, but in the post-election period.”

NNU is running workplace campaigns to try to build local structures that can withstand the employer assault already underway. First up are a series of “assignment despite objection” drives, borrowed from the union’s California playbook. The aim is to document unsafe staffing situations, which feed into bargaining demands and the work to pass state legislation that sets nurse-to-patient ratios.

“The nurses are starting to realize that winning the union isn’t the end but the beginning,” said Judy Lerma, a San Antonio RN who volunteered in the HCA drive.

NNU reports 30,000 of the state’s 214,000 nurses have paid $30 a year to join. These non-majority unionists say some of their unorganized hospitals are already improving staffing in response to the union’s gains in Texas.

Next up is an assault on missed meal and rest breaks, an endemic problem in understaffed hospitals.

The building blocks of a union culture, like phone trees and union-pin days, are spreading info about bargaining and cultivating leaders. Organizers are confident the bar on corporate campaigning can be overcome by strong worker-to-worker contact.

The boss knows these workplace leaders will make or break the union, since an overstretched staff can’t represent the far-flung facilities on a day-to-day basis. A pattern of retaliation against vocal nurse union backers is emerging (though Burke says SEIU supporters aren’t being targeted).

Burke adds that SEIU is pursuing some of the same tactics, identifying department leaders, presenting petitions to the boss, and electing rank-and-file leaders for bargaining.

“It’s all so new here—it feels like a frontier kind of a thing,” Lavaughn Renner said. “We’re the pioneer women.”

A version of this article appeared in Labor Notes #380, November 2010. Don't miss an issue, subscribe today.
Related
Steward's Corner: A Path Out of Fear »
Chicago Health Care Workers on Strike for Safe Staffing, $15 Minimum, PPE »
Nurses Strike for More Staff at Big Illinois Health Chain »
Why and How SEIU Members Are Calling on Our Union to Expel Cops »
Chicago Unions Demand to Defund Police and Fund Health Care for All »