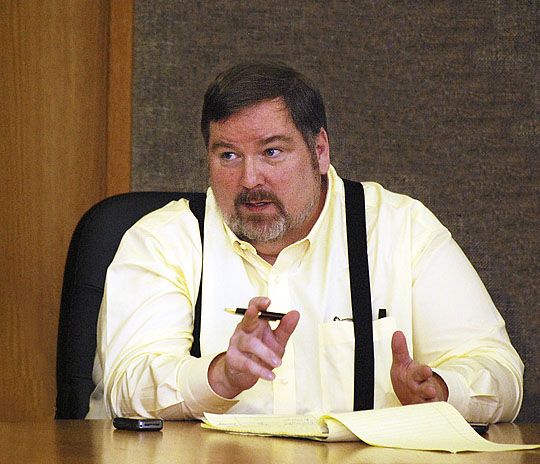 Larry Hanley was elected president last month of the 190,000-member Amalgamated Transit Union, which organizes bus drivers and other transit workers in cities across the U.S. and Canada. Delegates to the ATU convention voted 372-272 for Hanley over incumbent Ron Heintzman.

The former president of Local 726 on Staten Island and most recently an international VP, Hanley ran out of frustration with what he saw as the ATU’s inaction on the crisis facing transit workers—and the opportunities for green transit.

More ATU members are laid off now than at any time since World War II, Hanley says—at a time when it’s become clear to many that “transit is the greenest job you’re going to find.”

Two weeks after his election, Hanley called a meeting of transit unionists and transit advocates in Washington to start planning a national campaign to organize passengers around the service cuts, fare increases, and layoffs that have hit urban transit everywhere. Hanley proposed “boot camps” to train ATU local officers in community organizing.

The coalition will aim at more stimulus-type money from the feds. Because of the economic crisis, local transit systems need help simply to sustain themselves, much less expand.

Hanley says federal help “would reverberate throughout the economy and the environment. Who has a better story at a time like this than transit? We have the impact of global warming, the fact that we’re fighting wars all over the world to try and secure oil, we have an economy that’s stalled.”

“The federal government spent more money on transit last year than any year in history, yet we had historic cuts,” he said. “That’s because they earmarked 95 percent of that money to only be spent on capital projects.

“So you have transit agencies buying new cars long before they need them, putting new windows in their buildings, at the same time they’re cutting service, laying off people, and raising fares.”

Meanwhile, managements are using the current economic climate as an excuse to roll back contracts, eliminate pensions, and cut wages. Hanley points to layoffs of 25 percent of ATU members in Detroit last year, 2,000 projected in Chicago, more in Sacramento, Cleveland, Cincinnati, and New York.

Hanley’s experience as a local president taught him the value of allying with the riding public. In the mid-1990s his local’s leaders convinced 75 percent of members to contribute $5 a week for 20 weeks for a campaign to add bus service on Staten Island.

They advocated for (more efficient) larger buses, bus lanes, and lower fares, and finally, after postcards and mass visits to city hall and the state capital, won their demands. Ridership more than doubled and 500 jobs were added. “My experience absolutely tells me that it has to be unions and community hand in hand,” Hanley says.

He wants to grow mass transit not just to save the environment and his members’ jobs but because “one of the byproducts of car culture is that it takes away people’s sense of community. But you can’t scold people into mass transit. You have to create a traveling environment where it’s convenient to take a bus or a train, where it’s cheaper.”

BRING BACK THE BUS

Hanley actually began coalition organizing while still a vice president, back in February. He initiated a meeting of 60 transit locals from different unions to start the Keep America Moving coalition, aiming to build government and public support for mass transit.

Another goal is to address the deregulation that has decimated over-the-road transit. ATU’s 20,000 Greyhound members of 30 years ago are now 3,000.

“The average size of an over-the-road bus company in America today is three buses,” Hanley said. “Every time I hear about a bus rolling off a highway, I know there’s a 90 percent chance either the equipment failed or the driver fell asleep. The equipment failed because the company is undercapitalized. And the driver fell asleep because you have to work 100 hours a week to make a living driving a bus in this country.”

The federal government, he says, shouldn’t be so reluctant to regulate performance of equipment and drivers.

Hanley says that where they’d had contact with the locals, it wasn’t difficult to convince convention delegates to vote for him and running mate Bob Baker on their program of engaging members to fight for transit. He now faces the double challenge of reaching out widely to put green transit on the nation’s agenda while changing a slow-moving culture in ATU.

“For the last 30 years folks have been content to allow bad news all around them so long as it didn’t hit them too hard,” Hanley said. “That has to change. We have to have people who are willing to go out and tell our story.”