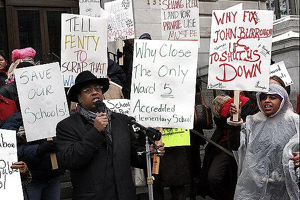 Nathan Saunders is leading a challenge to incumbents in the Washington Teachers Union. The union vote, wrapping up October 27, follows on a mayoral election that ousted a leadership identified with the virulent form of education “reform.”

A union election that could not be more loaded with educational and racial politics—and questions over union democracy—will soon shape the future of schools in the nation’s capital.

The D.C. public schools, whose students are more than 90 percent Black and Latino and whose teachers are predominantly Black, have experienced a virulent form of education “reform” under the recently resigned schools chief Michelle Rhee.

Since her hire in 2007, Rhee fired hundreds of teachers whose evaluations, partly based on students’ test scores, didn’t make the grade. Some teachers say the process was rigged to oust vocal opponents in the ranks. The firings inflamed many in DC’s Black community.

Now the 4,200 members of the Washington Teachers Union (WTU) will have an opportunity to vote on whether their union leaders—notably WTU President George Parker—have done a fair job of protecting teachers and fighting for quality education.

The union election, which runs from October 12-27, follows on a September mayoral election in which D.C. Council Chair Vincent Gray relied on strong support from Black voters to defeat the mostly white-supported incumbent, Adrian Fenty. The result has been widely viewed as a voter rejection of the Rhee-Fenty approach to school restructuring.

The union election bristles with energy not only because of the attacks faced by teachers in recent years but because of an internal democracy struggle that prompted the intervention of WTU’s parent union, the American Federation of Teachers.

On September 17 AFT placed WTU under trusteeship to ensure a fair election. The takeover comes after WTU’s failure to hold an officers election by July 1, as its constitution requires.

AFT noted other irregularities in WTU’s election process. In March, Parker attempted to appoint four members to the union’s elections committee, a body that is supposed to be fully elected. After AFT intervened to ensure a properly elected elections committee, the Parker-friendly executive board would not allow the committee to organize an election. The board then blocked AFT’s own attempt to hold a supervised WTU election.

The AFT also considered allegations that WTU officers and the executive board had retaliated against insurgents.

For example, Parker had refused to sign an annual renewal form to release WTU’s General VP Nathan Saunders from his teaching duties, and had also denied him his VP’s pay. Saunders has been sharply critical of Parker’s leadership and is challenging him for the presidential slot on a reform slate. A return to the classroom would have certainly hampered Saunders’ campaign effort. AFT ordered WTU to restore Saunders’ release time status and his lost pay.

The main concern driving the reform slate is Parker’s collaboration with the district in its anti-teacher initiatives. In line with President Obama’s “Race to the Top” agenda, Rhee moved aggressively to tie teacher pay and job security to student test scores. Her moves helped secure federal funds for the district as well as private funding from conservative billionaires.

This spring, Parker settled a new contract that largely surrendered to Rhee’s terms, accepting pay-for-performance bonuses in exchange for sharply reduced teacher job security. In June, Parker joined hands with Rhee in a PR campaign that convinced a majority of teachers to ratify the contract. A month later, Rhee fired 241 teachers. Another 737 received written warnings.

Saunders came to union office with Parker in 2005. The two ran on the same slate, seeking to get WTU back on its feet after its prior president was imprisoned along with other officers for embezzling union funds.

But after the school district fell under the mayor’s control and faced new pressures from President Bush’s “No Child Left Behind” program, charter schools, and then Obama’s “Race to the Top,” Parker wouldn’t organize resistance, Saunders says.

“When Rhee came in with her billionaire friends, Parker literally quit advocating for teachers,” he said. “His outlook was, ‘It’s going to happen anyway. Might as well get on the bandwagon.’”

Rhee’s resignation on October 13 came one month after Vincent Gray’s victory in the mayoral race and was no surprise to most observers. Rhee had publicly declared Fenty’s defeat as “devastating” for D.C. schoolchildren.

Teachers are widely pleased with the results of the mayoral election and Rhee’s departure, Saunders said. He and other WTU reformers hope the spirit of change carries through October’s union vote.