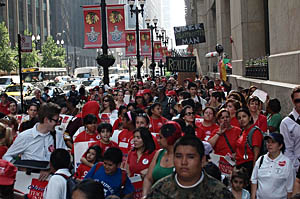 Following a huge downtown march that drew at least 5,000 teachers and community members, Chicago's Caucus of Rank and File Educators is gearing up for a long battle against the city's corporate restructuring of schools. First, they have to knock off the incumbents in a June 11 runoff election to lead the Chicago Teachers Union. Photo: Isaac Silver

Only a day had passed since elections inside the Chicago Teachers Union revealed a neck-and-neck race between the incumbent United Progressive Caucus and the upstart Caucus of Rank and File Educators. But with a runoff vote to lead the 30,000-strong CTU looming, thousands of Local 1 members marched together on May 25 anyway, focused on stemming the city’s austerity plan for schools and public services.

The CORE-initiated march, endorsed by the incumbent CTU leadership, brought at least 5,000 people downtown in a show of unity. Schools "CEO" Ron Huberman is threatening to lay off 3,000 teachers, and wants to raise class sizes to 37 students. Despite a virtual press blackout, protesters shut down a main thoroughfare, getting Richard Daley’s attention while the mayor’s limousine waded through the crowd. "We should have done this every year for the past six years," said CORE presidential candidate Karen Lewis, who spoke before the union’s House of Delegates following the action.

While Huberman was the focus, electioneering continued. CTU President Marilyn Stewart hijacked a press conference and got her photo-op with bullhorn. But at the end of the day, her slate faced the reality that 65 percent of the union had just voted for someone else to lead the third largest Teachers (AFT) local in the country. CORE is in good position to end Stewart’s six-year tenure, gathering the endorsements of the three other caucuses before the decisive June 11 vote.

Whoever wins will need support from outside the union ranks to fend off another wave of cuts aimed at solving the district’s purported $600 million budget deficit. Unable to bargain over class size, teachers are turning to the community to build pressure against Huberman’s proposal to pack more students into each class. City bus drivers, who’ve suffered waves of layoffs and service cuts at the hands of the transit chief-turned-schools manager, raised placards reading: "Huberman: Classrooms Are Not Buses."

The Grassroots Education Movement, a community-teacher effort, has been instrumental in opposing—and at times beating back—the city’s decade-old privatization push—initiated by now-Secretary of Education Arne Duncan. GEM has countered the plan to close dozens of public schools and replace them with non-union charters, which has achieved few of its promises to “raise performance,” according to a University of Illinois-Chicago report on city schools. Instead, the schools plan has shut out special education students and English language learners, while displacing students from their neighborhood schools.

Meanwhile, Chicago’s "reforms," held up as a national model for fixing failing schools, faces scrutiny right as CORE readies members to fight Obama’s corporate reforms where they were born. The federal Race to the Top plan has put the AFT, the National Education Association (NEA), and its local affiliates on its heels, daring the unions to oppose federal incentives for corporate-style reforms and thereby risk getting hammered for defending a failing "status quo."

"I have taught in this system for over 20 years and I have never seen this level of attack—scapegoating educators for all that ails urban schools," said Lewis. CORE is intent on ending teacher bashing in the media by telling teachers’ stories and organizing in the community. On election day the caucus will host a public "grade-in" downtown, where educators will grade papers together—off the clock.

Stewart is campaigning on her experience, claiming that Huberman and the Board are "rooting for the rookies" over her team, which she argues is best equipped to negotiate and protect the union’s five-year deal, now in year three. The UPC touts the deal for achieving raises in hard times and slowing down rising healthcare premiums through the first three and a half years of the contract.

But job loss and charter school expansion have continued under the UPC. The union has lost 6,000 members in a decade. "Marilyn may have experience, but where has it gotten us?" asks teacher Norine Gutekanst, a CORE organizer. "We’re afraid the union is becoming irrelevant."

Stewart wants to hunker down and ride out the economic storm. She told the Sun-Times: "You don't make radical changes in times of trouble." While the city calls on teachers to re-open the contract and decide between their contract’s 4 percent annual raise and massive layoffs, the incumbent’s play-it-safe strategy is falling flat with members.

While both contenders say they’ll refuse to open the contract at Huberman’s request, CORE leaders are saying they don’t believe the city’s accounting either. They’ve called on the district to open the books, and are in court over the district’s refusal to share public documents about the city’s finances.

The ProActive Chicago Teachers caucus came in a distant third in the race, garnering 15 percent on voting day. The slate, led by former union President Debbie Lynch, has thrown its support behind CORE—citing the caucus’s commitment to protecting pensions and fighting school closings. Lynch brought a reform slate to power in 2001, ending decades of UPC rule—only to lose to Stewart’s "new UPC" in 2004 in a narrow vote riddled with allegations of fraud.

Residual anger about Lynch’s 2003 contract deal hurt PACT’s chances this time around. While the deal put teachers working as full-time substitutes on a track to tenure, it also included a provision that allowed the district to fire thousands of probationary teachers—which it promptly did. "We won some tenure rights, but at the same time things became more uncertain for teachers," says Gutekanst, who was active in PACT’s 2001 campaign.

Still, PACT sounded a second voice of reform alongside CORE this time. The caucus railed against the UPC’s attempt to shut down opposition caucuses, filing and winning a March free speech lawsuit after the UPC and the district tried to disallow union campaigning in the schools.

CORE has no doubt that the well-oiled UPC machine will have some more tricks up its sleeve before the vote—even after Attorney General Lisa Madigan contradicted the incumbents’ campaign mailers celebrating her endorsement.

Lewis and Stewart were to meet at a June 5 debate hosted by Jesse Jackson's Operation PUSH. Stewart canceled, citing scheduling conflicts, leaving Lewis as the keynote. The UPC has chosen to debate through its website instead, decrying the host of "pie in the sky" promises they say reformers can’t make good on. A moratorium on school closings? Hiring more counselors while Huberman’s threatening layoffs? Reduced class size? Paid and pensionable family leave? Halting the privatization of schools? These are not the pillars of a plan to save public education, just more "unrealistic pledges" made by their naïve competitors.

And while the UPC’s "No We Can’t" vision rightly considers Daley and Huberman’s destructive force, Lewis and company believe the union’s power has not really been tapped yet—it’s impossible to know what’s possible inside the union and the school district. As June 11 nears, teachers are faced with two visions of unionism and, perhaps by necessity, are choosing the prospect of renewal over the defeatism of "real politics."

A version of this article appeared in Labor Notes #375, June 2010. Don't miss an issue, subscribe today.
Related
Minneapolis Strikers Demand a Living Wage for the Lowest-Paid Educators »
Richmond Educators Are First In Virginia to Win Bargaining Rights »
Twin Cities Teachers and School Employees Gear Up for Strike »
As Omicron Rages, Teachers and Students Fight for Safety Measures in Chicago and Elsewhere »
Teachers Strike against a ‘Heartless’ School Board in Biden’s Hometown »