Nurses Move Toward a 'Superunion' 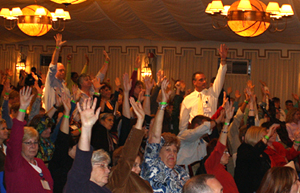 A national “superunion” bringing together 150,000 bedside nurses will kick off its founding convention on Monday. Fights inside two of the three unions that are coming together make it clear that how unions make major decisions sometimes matters to members as much as the end product.

In the United American Nurses (UAN), a 40,000-member union spread across 19 states, leaders with small memberships, fearing they’d be sidelined in a bigger union, walked out of a November meeting to prevent a quorum. Some filed a lawsuit in northern Illinois in late November to stop the union's move into the NNU; their attempt to win a restraining order was turned down today.

In Massachusetts, an outraged band of nurses tried and failed to prevent a vote at an October meeting to approve the national union. But neither lawsuits nor angry dissent upset a schedule announced in February to form National Nurses United, a combination of the UAN and state nurse unions in Massachusetts and California (CNA).

Supporters say the national organization promises to intensify organizing efforts, coordinate on state and national legislation that establishes nurse-to-patient ratios, and aggressively advocate for their profession and patients.

The merger was approved 390-116 in a raucous assembly in Massachusetts, during which dissenters forced a voice vote taken one member at a time.

“It dilutes the [nursing] practice to be tied to a union that supports the AFL-CIO, with teachers and carpenters and everything,” said Kelli Roof, a Boston neonatal intensive-care nurse. She questioned why the union in a bad economy was rushing to form a national union, which would boost dues by about $3 a week for the best-paid nurses (less for lower-earning RNs).

“It feels rushed to some, but for those of us who have been around, it feels like too long,” said Beth Piknick, outgoing Massachusetts Nurses president.

Nurse union leaders and activists have made several overtures toward a national union in the last decade but none jelled.

The structure of nurse unionism is a fragmented affair. Associations in Massachusetts and California about a decade ago broke away from the management-dominated American Nurses Association (ANA), as did the UAN last year. Michigan and Minnesota’s 32,000 nurses make up 80 percent of the UAN. Another 15 unions, from Steelworkers to Service Employees, represent tens of thousands of nurses—although 85 percent nationally remain unorganized.

Even among supporters, it’s no secret where the driving force for the NNU comes from.

“CNA is driving this bus, we don’t have a hand on the steering wheel,” said one union staffer.

That has proven the largest stumbling block for the new union. Luanne Long, Hawaii Nurses Association president, said California staffers occupied her union’s offices in 2004 during an attempted raid on HNA. A court later ordered their removal.

“It will not take overnight for people to get comfortable with a predatory organization,” she said.

CNA’s growth is driven by raids and mergers, not organizing, argues Elwood Thompson, a staffer at the Illinois Nurses Association, which lost 1,900 nurses four years ago when CNA displaced it at Chicago’s Cook County health system.

A CNA spokesman says “virtually all” of CNA’s 86,000 members were newly organized, adding that the union grew from 18,000 in the mid-’90s. Deb Burger, a CNA co-president, noted her union didn’t draft the affiliation agreement unilaterally—each union had teams negotiating the deal.

“In the short time CNA has been representing nurses we have come a long way in improving working conditions for nurses and their compensation and benefits,” she said. “We do not have any regrets for our actions at all.”

In the UAN, recent decisions have been made by 4-to-3 executive council votes after President Ann Converso and leaders from Hawaii and Alaska turned against forming National Nurses United. Support had been unanimous until this summer, when Converso says serious concerns weren’t resolved: UAN would disappear into NNU. The affiliation agreement says the union’s structure is unreviewable for three years.

Worst of all, in UAN dissenters’ view, NNU will be controlled by the California Nurses. CNA’s Rose Ann DeMoro is likely to be selected as executive director at the inaugural December meeting, and CNA’s superior numbers will give it majorities in the executive council and delegate body.

“We want some place where as a bloc we can go in, make our argument, and make it stick,” Converso said.

Converso and her UAN allies didn’t convince executive council members from Michigan, Minnesota, and D.C., who sanctioned sending mail ballots on the question to UAN delegates. The voting power of Michigan and Minnesota affiliates produced a 40-22 result in late November in favor of joining National Nurses United.

Along with Converso, UAN Vice President Joan Craft and the Illinois Nurses filed a lawsuit in late November to halt UAN's move into the national union, claiming that without a quorum, constitutional provisions for a merger were violated. Their bid for a temporary restraining order was denied today, with the judge concluding their argument "fails on the merits."

"It feels very vindicating and it leaves us a lot more open to getting down to business next week," said Jean Ross of the Minnesota Nurses Association, who will become of one the three co-presidents of the new union.

Converso rejected accusations Ross and others made in an opposing lawsuit that she hindered the UAN's move into the national union for "personal interests." She said, "A leader doesn't lead you into the wrong place. This [superunion] isn't what we built for and dreamed of." Thompson of the Illinois Nurses promised that legal challenges would continue.

Massachusetts saw a rowdy and thoroughgoing debate. Dissenters complain the decision to affiliate was a foregone conclusion.

“What more could we have done?” asked Karen Higgins, a Boston intensive care nurse slated to become one of three presidents of National Nurses United. She notes that the Massachusetts board of directors unanimously endorsed seeking a national affiliation last year, and that the union published dissenters’ opinions and held regional and workplace meetings on the question.

“When change happens, people are uncomfortable with it,” she said. “The new organization has to prove itself and prove that the risk was well worth it.”

Anti-nationals say dues would be better spent building a presence at home. “We don’t live on an island,” countered Karen Coughlin, a psychiatric nurse and Massachusetts board member.

California’s delegate body, meanwhile, voted unanimously for the affiliation in September. Two CNA members said the national union was uncontroversial; CNA has had a national branch operating for years.

“If we’re doing our work right, eventually we won’t be the majority, but for now, we have the numbers,” Burger said.

No union asked all members for a vote on the national union. Minnesota Nurses President Linda Hamilton says UAN didn’t poll members because Michigan and Minnesota would have dominated any vote. Burger said she’s comfortable with CNA’s delegate system.

In Massachusetts, members say big decisions are made at annual town hall-style assemblies; show up and participate.

Massachusetts nurses approved the dues increase for the national union in a mail ballot, however, and dissenters wanted the affiliation vote mailed home, too. “That would destroy the kind of democracy we have as a union, even if it’s cumbersome,” said Massachusetts member Christine Folsom.

Ultimately, nurse union leaders hope time will heal the internal disputes, much as it did after state groups left the ANA. Nurses quit, but came back when they saw the state groups were effective as unions.

“It’s time to appeal to the better spirit of our nature and claim our voice,” Piknick said. “We can walk away from history for three bucks a week or walk toward the future.”