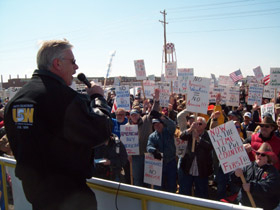 Related
Auto Workers to Vote on Direct Elections »
'2,000 Zloty for Everyone': Polish Amazon Workers Demand Bonus »
Brooklyn Teamsters Protest UPS Harassment of Black Shop Stewards »
Can Auto Workers Win the Right to Vote? Here's How Teamsters Did It »
Viewpoint: 'The Irishman' May Win an Oscar, But It Shouldn't Win Union Members' Hearts »