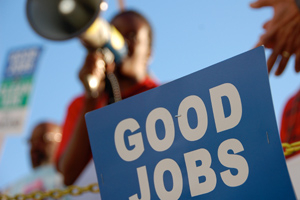 As hundreds of billions of taxpayer dollars flow into rickety U.S. banks, public outrage has followed revelations that executives planned to spend the money on Vegas getaways, $35,000 toilets, and fat bonuses.

Less attention has been paid to how these bailed-out banks are driving down tech workers’ wages—and stoking anti-immigrant hostilities—while laying off tens of thousands of workers.

Banks that took public money sought about 4,200 visas for skilled workers from abroad in the 2008 fiscal year, according to an Associated Press investigation. In response, Senators Bernie Sanders and Charles Grassley attached to the latest round of bailout funds a requirement that banks must try to find U.S. workers first, and not displace them three months before or after taking public funds.

Unions trying to organize the notoriously fragmented technical workforce hailed the restrictions. They note a government study from last September which found that 21 percent of the applications employers filed for work visas were fraudulent or contained violations. More than one-quarter of these employer violators failed to pay prevailing wages to foreign-born workers.

“In a situation where U.S. taxpayers are funding the rescue of U.S. banks, nothing could be more appropriate than to protect against having federal money foster these abuses,” said Paul Almeida, the president of the AFL-CIO’s Department for Professional Employees.

The top five banks receiving bailout funds have announced 131,700 layoffs since last summer, with thousands more expected. Unemployment among college graduates over 25 years old rose markedly in recent months, according to the Department of Labor. About 1.9 million educated workers were out of work in January, an increase of 800,000 in six months’ time.

But workers in the tech industry and researchers who track the work visa program say the Sanders amendment affects only a small fraction of visa-holders who end up working for banks in the U.S.

The major abuse of the program occurs through “bodyshops,” consulting firms that secure thousands of the 85,000 skilled visas available each year and then contract visa-holders to the banks, said Ron Hira, an outsourcing expert at the Rochester Institute of Technology.

“The banks are major clients of these offshore outsourcing companies, which then exploit the loopholes,” he said. A government study, authored by the Department of Homeland Security last year, says bodyshops often force visa-holders to repay thousands of dollars in fees.

In Charlotte, North Carolina, a senior software engineer at Wachovia—recently purchased by Wells Fargo—said his company is replacing entire departments of local engineers through consultancies that bring in foreign-born workers.

He said they tolerate lower wages and live four to an apartment, but don’t complain much because the pay is slightly better than in their home countries.

“The visa is meant to bring in somebody with talent to augment a U.S. business,” said the engineer, a foreign-born worker who requested anonymity for fear of blacklisting. “It’s not intended to replace an entire local industry, which is exactly what’s happening in Charlotte.”

Computer engineers across the country say visa-holders are forced to knuckle under at work because their legal residency here is tied to their employer.

“They tell them to work on Sundays and they do it, because they work or they go back to India. It’s indentured servitude,” said Kim Berry, a Sacramento software developer and head of the Programmers Guild, a professional association.

Among tech workers, open prejudice against foreign-born colleagues is common. But some point out that visa-holders have no bargaining power—and that it’s banks and big corporations, worming through the visa system’s loopholes, that are coming out ahead.

The median wage for visa-holders in computing professions who entered the U.S. in 2005 was $50,000, according to Hira’s research—not even close to the $100,000 wage Microsoft’s Bill Gates touts in testimony—and less than entry-level wages for others in the industry.

Steve Mount, a software engineer at GE Healthcare and a supporter of WashTech, a Communications Workers local organizing tech workers, said the banks’ acceptance of public money should force regulators take a hard look at the their employment practices.

“The financial industry operates in a realm above the rest of us, in a place where the only thing bigger than the salaries are the bonuses,” he said. “Now that these companies are relying on our money, we have a vested interest that it doesn’t drive down our living standards.”

The conclusion everyone endures one about the skin, banks for the money, but anybody never thinks of that that people which take credits from a hopelessness, and after even chain itself therefore as the bank presses on people, whether also excites there is nobody that possibility to return this money after all nobody is insured, for this purpose banks should facilitate a life to the person which took the credit.

In the nineties, when demographic processes and labour market requirements were included into the contradiction with a prohibitive migratory policy of the West European governments, last began to be reconsidered aside more differentiated, selective approach to different categories of the countries and kinds of specialities. The role of "new minority" has increased: the states have been compelled to recognise what to shut eyes to problems of foreigners - does not mean to solve them. Objective process of growth of a share of the population of "new minority" with the migratory network gives the basis to think, that prohibitive measures will be a little effective. Europe requires a labour, basically not qualified, seasonal, for specific branches, and the labour market dictates the rules. As legal migration is more preferable, than illegal (even from the point of view of reception of taxes), the European Union countries are in process now of painful search of a golden mean between allowing and restrictive measures of the migratory control.
-J.S.-

The $50k wage comes directly from the government. The US Citizenship & Immigration Services is required by statute to publish a report every year called the "Characteristics of Specialty Occupations." The most recent report available is from FY05. USCIS has refused to release any more recent reports.

Yes, it is low, which is the whole point, right. The H-1B program's loopholes enable employers to pay below-market wages. Just like companies take advantage of tax loopholes, they also take advantage of immigration loopholes. That's why we need a public policy fix.

Some of you need to get a few things straight. Stop wasting time lobbying for "immigrant" rights, the emphasis has to be on citizen worker's civil rights. I refuse to expend my energy on illegal aliens and visa workers. Congress can do something about this, they are choosing not to, because they are collecting huge sums from the corporate interests, and not feeling too much heat for it, from their constituents. Now is the optimum time to rally a wider swath of the population to scare the living hell out of congress, significant numbers of irate citizens complaining, visiting district offices, getting media attention (and there are lots of journalists facing the scrap heap, now is the time to get them to realize that if they report on the public interest, their newspapers circulation numbers would skyrocket.. they need to cover how citizens are being harmed by illegal aliens and the exploitation of our visa programs, when there is NO shortage of skilled, etc... citizen workers) and raising hell in general. If congress realizes that they too might end up removed from office and their sugar daddies, it might provoke them to actually do more.

I was a once vocal opponent of undoucumented wokers rights who has seen the errors of my ways when it comes to my industry, construction.

In light of that experience, I really have to say that what needs to be done is to unionize these immigrant professionals, and fight for them to have the same employment rights as US citizens, rather than to eliminate their visas.

Is the CWA's WashTech organizing committee doing anything to unionize these immigrant engineers, or to fight for their rights?

For better or for worse, we live in a globalized world - so it's really not productive to talk about shutting the doors to our fellow workers from overseas.

It's not going to happen - and frankly it would be a pretty ugly world if it did.