Unions Back Plan that Could Kill Off Real Health Care Reform 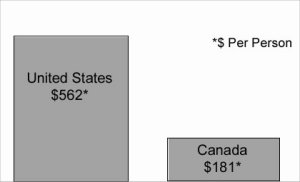 But the most powerful of these groups, including the AFL-CIO and Service Employees (the major Change to Win health care union) are promoting a solution that won’t fix the problem.

Their plan would fatten the insurance industry and make it an even more formidable opponent of true reform than it already is.

If SEIU and the AFL-CIO get their way, the day that all Americans have affordable insurance will be pushed into the unforeseeable future.

The labor-backed plan, which they call “guaranteed affordable choice,” would create a public program like Medicare that would allegedly compete with the nation’s 1,500 insurance companies. Americans would get tax-financed subsidies to purchase insurance from either a private insurance company or the public plan. Competition, which has never worked in the health insurance industry, would magically come to life.

By leaving the bloated insurance industry smack in the middle of our health care system, “guaranteed affordable choice” would have taxpayers and premium-payers continuing to spend hundreds of billions of dollars on unnecessary administrative costs.

Oddly, the AFL-CIO and SEIU have also endorsed an entirely different plan: the single-payer solution.

The AFL-CIO’s executive council endorsed the concept in March 2007 by calling for the expansion of Medicare to people of all ages. SEIU endorsed HR 676, a single-payer bill pending in the House of Representatives, at its June 2008 convention.

“Single payer”—the system used in Canada and other countries—gets its name from its most essential feature: One payer, a public agency, replaces the 1,500 insurance companies. It becomes the sole reimburser of clinics and hospitals. That one agency has the authority to set limits on what doctors, hospitals, and drug companies can charge. Patients go to doctors and hospitals of their choosing. The traditional Medicare program is an example of a single-payer system.

The U.S. spends twice as much per person on health care as other industrialized nations. Single payer is the only system that can achieve universal coverage for the same or less money than the nation spends now.

Replacing all those insurance companies and dozens of government programs with one payer slashes the huge costs incurred by doctors, clinics, and hospitals on billing and arguing with insurance companies about how to treat patients. It wipes out what insurers spend on marketing and excessive salaries, and what they take in profits.

The issue that unions are sidestepping is whether the mere presence of a public program in the jungle of private insurance companies would force private insurers to lower premiums without resorting to delaying or denying care to some.

Sandy Eaton: In Health Care Reform, Massachusetts Shows How Not To Do It

The AFL-CIO’s and SEIU’s endorsements of single payer appear to be window dressing. They are putting all their energies into “guaranteed affordable choice.” They do it in their own names, and as members of the Herndon Alliance and the Health Care for America Now coalition, which became public July 8. These coalitions criticize single payer as “not politically feasible.”

SEIU’s track record is even worse than the AFL-CIO’s. Unlike the federation, SEIU President Andy Stern regularly trashes single payer. “I think we need to find a new system that is not built on the back of the government,” he told the Brookings Institute two years ago. “We are going to build an American system because we are Americans.”

Some liberals say they support single payer but won’t work for it because the insurance industry is too powerful to beat. But Stern bases his trash talk on a more baseless and insidious claim—that average Americans oppose single payer.

He says we embrace a hyper-patriotism that causes us to resist adopting good ideas from other countries—even Canada—and are so satisfied with our current insurance companies that we will fight any attempt to replace them.

Stern’s perception is contradicted by many polls and focus groups. A December 2007 AP poll, for example, found that 65 percent of Americans support “a universal health insurance program in which everyone is covered under a program like Medicare that is run by the government and financed by taxpayers.” A poll by ABC News in 2003 found 62 percent in favor.

WHY BACK A BAD PLAN?

Why would the AFL-CIO and SEIU endorse single payer but then, in reality, support a plan that will not cut costs?

Getting officials to answer that question is difficult. Even though they are clearly supporting “guaranteed affordable choice,” representatives of the AFL-CIO, SEIU, and the coalitions they belong to say there’s no need for the rank and file, or the public at large, to understand the differences between the two plans.

This assumption was articulated by Bruce Popper, a member of SEIU 1199-United Healthcare Workers East, from the floor of SEIU’s June convention.

“My local union, my local labor council, and community groups all over in my area are for single payer,” Popper said. “But I’m not going to get bogged down in an endless debate about which plan will work best. We must leave that debate until the day when we can actually enact a plan. That day is the day after our candidate, Barack Obama, wins the White House.”

Nick Unger, AFL-CIO’s health policy analyst, makes the same point. In a recent presentation, he put it this way:

Health care. All you need to know is:

• It costs too much.

• It covers too little.

• It excludes too many.

• And it’s getting worse.

But advocates of “guaranteed affordable choice” have already decided which plan is best and they are communicating their decision to Democrats. The labor-supported coalitions claim credit for having persuaded John Edwards, Hillary Clinton, and Barack Obama to endorse the basic elements of their plan.

Union members have several explanations for why the AFL-CIO and SEIU are promoting a proposal that can’t work and which feeds the health insurance industry, the very industry most dedicated to killing single payer.

A representative of the AFL-CIO, who asked not to be identified, said the federation is divided about how to solve the health care crisis. Apparently the federation’s endorsement of Medicare-for-all merely reflected the executive council’s desire to acknowledge that single-payer advocates existed in their ranks.

Mike Carano, a member of Teamsters Local 348 in Ohio and longtime activist with the state’s Single-Payer Action Network, offered another explanation. “The AFL-CIO and SEIU are pretty close to the Democratic Party,” he said. “The Democrats don’t want to take on the insurance industry. I imagine one way the AFL-CIO and SEIU support Democrats is not to upset Democrats.”

The United Kingdom (U.K.) has had genuine socialized medicine since the late 1940's. A grand historic experiment has occured, since the U.S. was forced into a multiple payer, somewhat commercialized system over those 60 years. The results:
U.K. spends about 8 percent of Gross Domestic Product (GDP) on healthcare.
U.S. spends 16.2 percent of GDP on healthcare.
U.K. supplies healthcare to whole population.
U.S. has 47 million people without healthcare insurance, and a large part of those with insurance could not financially weather a serious illness (underinsurance) according to Consumer Reports.
U.K. ranks in the top 5 or so in health outcomes in international comparisons.
U.S. ranks 37th in health outcomes in international comparisons.
The American system is failing, and this failure is caused by ignoring the lessons of history.

My daughter's health insurance was canceled while she was in the PICU awaiting yet another surgery. Our local's plan doesn't cover family members (yet!) so we are currently struggling to cover her bills. How dare Andy Stern take my dues and use them to work directly against me and my family!!! We pay very high dues in SEIU compared to other unions and yet have no real voice in how they are used. It's as if my own union has morphed into another corporate entity that I and other members must fight in the battle for a just, sane system of medical care in our country.

We tried to get single payer insurance in the Clinton administration and had it shot down in flames. As attractive as the concept is to many, it had the effect of galvanizing the rightwing into fighting what they called "socialized medicine" and cost the Clintons a lot of political muscle. We should allow the public debate to proceed in Congress without limiting ourselves to one concept or we will lose again.

Bill Clinton's 1993 Health Security Act (HSA)was most definitely not a single-payer bill. It would have forced all but wealthy Americans into HMOs. Your confusion may be due in part to the fact that the non-HMO wing of the health insurance industry fought the HSA. This wing, represented by what was then called the Health Insurance Association of America, sponsored the Harry and Louise ads that contributed to the defeat of the HSA. But the opposition of the HIAA is obviously not proof that the HSA was a single-payer.

Your argument (which is also promoted by SEIU and the AFL-CIO) that "we" outside of Congress should not "limit ourselves to one concept" makes no sense. That's like saying those who oppose nuclear power should not organize a movement for an alternative energy source, but should only kvetch about nuclear power. More importantly, this odd advice ignores the fact that SEIU and the AFL-CIO, and their allies in the Herndon Alliance and Health Care for America Now, are not taking their own advice. They are promoting a multiple-payer proposal (they call it "guaranteed affordable choice") replete with specific funding mechanisms (including payroll taxes) and rules they hope can be enforced against the insurance industry.

What explains SEIU's and the AFL-CIO's strange behavior -- endorsing single-payer, but also calling on the unwashed rank and file not to support single-payer or any other solution, then behind the scenes (and not-so-behind-the-scenes) promoting a multiple-payer proposal on the ground that Americans really like their health insurance?

As long as the insurance industry is part of the mix we will never have a successful single payer plan. Profit simply shouldn't be part of necessary medical care.