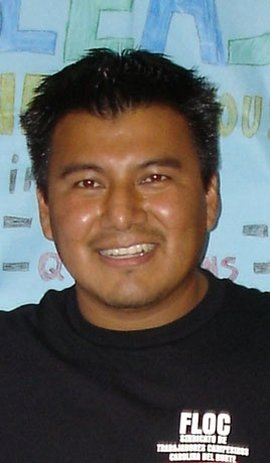 Santiago Rafael Cruz, an organizer for the Farm Labor Organizing Committee (FLOC), was found murdered in the union’s Monterrey, Mexico office on the morning of April 9. He had been bound hand and foot and beaten to death. Circumstances suggest labor contractors may have had him killed.

Cruz had worked for FLOC in the U.S. for four years organizing immigrant agricultural workers. For less than a month, he worked in FLOC’s Monterrey office with migrant workers covered by FLOC contracts.

FLOC and the AFL-CIO are demanding an immediate and thorough investigation, and Congressional Representative Marcy Kaptur has requested that the U.S. State Department press the Mexican government to bring the killers to justice.

Who would want Cruz killed? To answer that question we have to understand the labor contracting system in Mexico.

In Mexico labor contractors usually funnel workers into the H2A visa program, which permits them to work legally for agricultural employers in the U.S. To get these jobs, which pay more than ten times what they could make in agriculture in Mexico, workers often have to pay the contractors and bribe various other middlemen.

At least, that’s how it worked for years.

Then in 2004, after a five-year organizing campaign and boycott, FLOC won a contact for 8,000 H2A workers working on a variety of crops on 1,050 farms across North Carolina. Under the contract, employers had to pay for the workers’ visas and transportation. Rather than paying large sums in bribes for H2A jobs, now workers would simply fill out forms to be dispatched. This new system saved the workers $2 million last year alone, FLOC says.

To support its members and educate them about their rights before they arrived in the U.S., as well as to protect them from exploitation by labor contractors, FLOC established its Monterrey office in 2005.

The Monterrey office quickly came into conflict with the corrupt contractors who had been providing workers to the growers in North Carolina. FLOC’s presence in Mexico cost the contractors hundreds of thousands of dollars. Soon after the FLOC office was opened in Monterrey it was broken into and equipment and files were destroyed.

While the Mexican police have yet to arrest or charge any suspects with Cruz’s murder, the labor contractors certainly had a motive. “It was a purely political attack,” said FLOC President Baldemar Velásquez. “We think the motivation was that the union contract was adversely affecting the labor contractors, the recruiters… They have been unhappy with the union taking away their gold mine.”

Velásquez continued, “We disrupted not only the recruiters working for growers in North Carolina, but all the recruiters who recruit workers for all the other states: from Florida and Georgia, through South Carolina and Virginia, all the way up to Pennsylvania and New York. That is because our precedent applied to all of those recruiters.”

While the murder of labor activists was common in Mexico in the late 1960s and 1970s, few have been murdered in recent years. Employers or government-controlled unions will fire union activists, and sometimes beat them up, but few activists are murdered.

Monterrey, however, is the capital of the state of Nuevo Leon, and Nuevo Leon seems almost another country. One of Mexico’s most industrialized states, all of its industries—brewing, glass, steel—were for decades owned by the Garza-Sada clan, which strenuously opposed the organization of workers in its factories.

When Mexican unions organized into the powerful Confederation of Mexican Workers (CTM) in the 1930s, Monterrey successfully fought them off. In fact, the state of Nuevo Leon has its own labor unions, often called sindicatos blancos (white unions), company unions completely dominated by the state’s most powerful corporations.

The establishment of a FLOC office in Monterrey represented not only a direct challenge to corrupt labor contractors, but also an implicit challenge to the Monterrey elite who have for years controlled the political and economic life of the city. While it is unlikely that anyof these elite would dirty their hands in a killing, the capitalists of Monterrey have created a climate that makes unions unwelcome and organizers pariahs.

Santiago Rafael Cruz, FLOC’s man in Monterrey, may well have fallen afoul of both the labor contractors and Monterrey’s anti-union environment. FLOC wants justice and rightly so, but it will be a battle.