After Wildcat Strike Against Concessions, Freightliner Workers Fight for Their Jobs 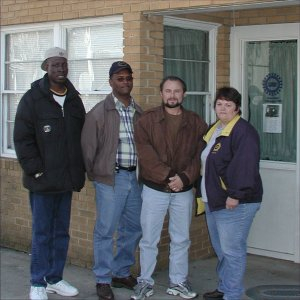 Franklin Torrence, Robert Whiteside, Allen Bradley, and Glenna Swinford of the Cleveland Five outside the union hall. "I really think (the UAW) need(s) to start listening to their members if they're going to organize (the South)," said Torrence. Photo: Ellis Boal.

Cleveland, a small town with less than 1,000 residents in western North Carolina, is an unlikely home for an active autoworkers’ union.

Freightliner LLC (now owned by Daimler) opened a truck-manufacturing plant in the town in 1989. The United Auto Workers won an important toehold victory in the growing, mostly non-union manufacturing sector in the South when they unionized the plant in 2003. UAW Local 3520 was created out of that victory.

Now, four years later, five Local 3520 leaders and activists dubbed the “Cleveland Five” have been forced to fight again—this time to keep their jobs and remain members of their own union. The five, all members of the local’s 11-person bargaining committee, were fired April 5 by Freightliner days after voting for and leading a strike opposed by the UAW International.

They were then put on trial by the UAW, and though the five were cleared of charges in November and remain UAW members, they are still out of work and await the result of pending grievances.

When members of the bargaining committee entered negotiations with Freightliner on February 17, it was their first contract negotiation as a team. Franklin Torrence, one of the Cleveland Five with 15 years at Freightliner, said the bargaining team worked hard to finalize a contract with the company, but when the contract expired on March 31, they were not done.

Members of the bargaining committee said the contract presented to them demanded givebacks and would have increased disparity between new hires and employees at the top of the pay scale.

Topped-out employees were offered 3 percent raises, while workers with less seniority—more than 50 percent of members—would have received no raise, said bargaining committee member Allen Bradley, another of the five who were later charged.

Bargaining committee members also saw the beginnings of a concessionary trend in their union’s negotiations that continued in the Big 3 contracts (see page 5). The union could have fought at Freightliner, they said, because the company is more stable.

“We didn’t have a concessionary caucus on our bargaining committee,” Bradley said.

According to the bargaining committee, neither the company nor the UAW International felt the same about concessions. When the committee arrived after the contract’s expiration to continue negotiations on April 2, UAW International staff had left town.

Freightliner told the committee that they had been given the “last and final offer” over the weekend, Torrence said, and they were to take the economic package back to the members, with the understanding that unresolved issues would be discussed after ratification.

“There’s no way we could do that,” Torrence said. “If we brought a partial contract back and it gets ratified by membership we would have no leverage.”

Bradley agreed. “We never wanted the strike,” he said. “We wanted the company and [UAW] International to come back to the table and bargain with us.”

Members of the bargaining committee said they called a strike when it appeared they were working without a contract. While the International claimed there was an extension, the company did not confirm it as work continued in the afternoon of April 2.

“The bargaining committee got together and voted on whether or not we were going to take action,” Torrence said. “It was unanimous: 11 to 0 for a strike. Members were telling us to strike to get the company to get back to the table and negotiate a complete contract.”

In previous weeks, the local had voted 98 percent to authorize a strike, and had held a strike rally.

Torrence and others entered the plant in the evening of April 2.

“We let the members know that the committee voted to strike but it was not sanctioned by the International,” he said. “We also let them know that we did not believe there was a contract and it would not be an illegal action.”

Workers began following the local leaders outside the plant. It was the first-ever picket for many.

While bargaining committee members say local president George Drexel had been initially supportive of the action, the strike ended when he sent a message to the local’s phone tree saying the strike was illegal and that members should return to work the next morning.

On April 5, five committee members were fired for stopping production. Six others, who were in the plant when the strike started, were also fired, although they were reinstated without back pay.

After members turned the contract down April 18, UAW Region 8 Director Gary Casteel sent a flyer to members’ homes, and members approved the deal three weeks later in a re-vote.

Although the bargaining committee was shut out after the strike, Bradley said they can claim a small victory. “We had the company telling us they wouldn’t accept our tentative agreement [during negotiations],” he said. “Once we had a strike, they began making changes to the contract and health care concessions were pulled.”

According to attorney (and Labor Notes staff member) Ellis Boal, who represented the five bargaining committee members in their trial, the evidence against them was shaky. “The top company facility manager the night of the strike stood in a crowd of 100 people and told them to ‘go home, you’ll get no discipline,’” he said. “Another witness said the company said it again in front of 40 people.”

Torrence, one of two African-Americans of the five who were tried, is the president of the first chapter of the Coalition of Black Trade Unionists in North Carolina. Torrence said that he and the other accused officers will remain committed to building a stronger labor movement in the South and are also active in the central labor council and the local NAACP.

“The UAW is desperate to organize the South,” he said. “I really think they need to start listening to their members if they’re going to organize knowing that North Carolina is only 3 percent unionized. If you want to organize in the South, you’ve got to listen to what people are asking for.”

Follow-up Labor Notes story, March 2008. For more information and to sign their online petition, go to the Cleveland Five.