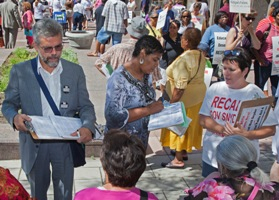 Michiganders collect petitions against Governor Rick Snyder and some of the many anti-worker laws the legislature is pushing forward. Photo: Jim West.

An “emergency manager” bill allowing a state-appointed executive to unilaterally fire city councils and school boards and cancel union contracts has drawn the ire of Michigan’s labor movement for months. Resistance to the measure, including rallies of a few thousand and a promising repeal effort, have united elements of the state’s labor movement.

The emergency manager law is just the beginning, however. Eighty-five bills now under consideration start from the view that Michigan’s economic problems are the fault of public employees and the poor, rather than driven by a merciless recession and the auto industry’s contraction.

While teachers relaxed over the summer, legislators attacked their tenure and seniority. School boards can now fire teachers for any reason during the first five years of employment. Districts have the power to fire tenured teachers for any reason, not only for “just cause.” Administrators also gained discretion over teacher layoffs and placement, based not on seniority but on “effectiveness.”

Another bill, introduced in October, would make dues checkoff illegal for teacher unions with more than 50,000 members, which means the Michigan Education Association.

MEA drew criticism from lawmakers in April for asking local affiliates whether enough support existed for a strike.

Public employees who use work email for union or political business are threatened with a thousand-dollar fine and a year in prison, under a bill moving through committees. Its author says the law would be enforced by workers reporting on each other.

A school privatization package would rescind the cap on charter schools. Another bill would take away domestic partner benefits for public employees, including those in union contracts.

Unions have staged several rallies, but look to Democrats to stem the tide.

The MEA issued a commercial and website titled “Stand up for kids, not CEOs,” that resembles a 2012 election ad. “It’s time we teach these Republican politicians a lesson,” declares the ad. Seven Democrats, however, voted for the provision facilitating teacher layoffs.

Attacks on workers and the poor go further than legislation. Michigan’s civil service has shrunk by 11,000 employees since 2001, and more devastating cuts to the social safety net are on the way.

A privatization effort in Grand Rapids has drawn scrutiny from veterans and public employee unions. Hundreds of workers at a state-run veterans’ home are being replaced by underpaid, undertrained contractors. Reports of incompetence and maltreatment are rolling in, and court hearings are scheduled.

Meanwhile, the emergency managers, appointed by the state to run cities and school districts operating in the red, continue to wreak havoc. In Ecorse, near Detroit, the manager forced 60 percent of firefighters to part-time schedules. They lost benefits and nearly half their pay with one day’s notice.

While two ambulances sat in the firehouse collecting dust, an emergency medical contractor took over.

Members of Firefighters Local 684 described an excruciating wait at the scene of a head injury, hearing the siren of the contractor’s ambulance as it searched up and down nearby streets for the location.

“They were holding the guy’s head together with a towel,” said President Scott Douglas. The contractor took more than 20 minutes to arrive. “I still don’t know if the guy made it.”

There are signs of progress.

“We’re able to pull together in ways that we haven’t seen in a non-election year,” said Greg Bowens, AFSCME Council 25 spokesperson. Public employee unions entered joint negotiations with the state for the first time.

Community organizations and unions have come together to gather signatures for a fall 2012 referendum on repealing the emergency manager law.

Clergy in Detroit are organizing, too, holding three marches at the governor’s Detroit office ahead of October 1, when the new budget went into effect.

Pastor David Bullock of the Greater St. Matthew Baptist Church in Highland Park is pulling together an anti-poverty summit. Bullock intends to go beyond lobbying to bring lessons from the civil rights movement to the 21st century.

“We lost the point of protesting,” Bullock said. “It’s to disrupt power centers and to challenge them directly.”

A version of this article appeared in Labor Notes #392, November 2011. Don't miss an issue, subscribe today.
Related
‘No Contract, No Matisse’: Philadelphia Museum of Art Workers Win First Contract After Strike »
Viewpoint: Support Veterans by Defending, Not Defunding, Public Sector Jobs at the Post Office and the V.A. »
New Leadership, New Direction in Major Midwest Teamsters Local »
Review: How Labor Can Stop ‘The Privatization of Everything’ »
Instead of Coal, These Nurses Gave Their Boss 900 Documented Incidents of Unsafe Understaffing »