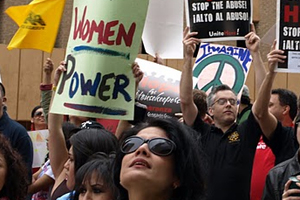 When a union hotel worker accused International Monetary Fund head Dominique Strauss-Kahn of sexual assault on May 14, the reverberations went far beyond the legal woes of one rich man.

The news fractured the silence around sexual abuse of hotel workers, a far wider problem than many assumed (or hotel managements acknowledged).

Another New York housekeeper, at the upscale Pierre, reported sexual assault by a prominent Egyptian banker May 29.

And on June 2, hotel workers held speak-outs on sexual harassment and assault by customers in eight cities. The events were organized by UNITE HERE, the hotel union.

“These customers think they can use us for anything they want, because we don't have the power that they have or the money that they have,” said Yazmin Vazquez, a Chicago room attendant.

Hotel workers face injuries from the physical stress of their work, including the awkward lifting of heavy mattresses hundreds of times a day. But the hidden hazard of hotel work, housekeepers say, is customers’ assaults on their dignity and physical integrity.

Workers report that male customers expose themselves, attempt to buy sexual services, grab and grope them and, in some cases, attempt to rape them.

Cecily Phillips, at the speak-out in Toronto, said she felt “humiliated, dirty, and nervous” after a customer groped her while she was making a bed.

The problem is so prevalent that hotel workers in Hawaii and San Francisco have resisted management efforts to make them wear skirts. Workers said the uniforms make them more vulnerable to groping in a job that requires bending over beds, tubs, and floors.

One worker reported wearing extra layers as a deterrent after a guest barged into a bathroom she was cleaning and exposed his genitals.

At the New York Sofitel, where Strauss-Kahn occupied a $3,000-a-night room, management has now changed the skirt uniform to pants and tunic, according to a union representative.

Room attendants’ safety is compromised by staff cuts that leave women isolated as they work. Some Hawaiian hotel workers on “turn down duty,” which involves entering rooms in the evening to draw drapes and turn down covers, used to work in pairs. Now management is asking them to work alone, and they say it makes them feel unsafe.

In Chicago, workers have fought for the right to prop the hotel room door open with their supply cart while they clean. Some hotel managements said it was “unprofessional” or might allow theft of items from the room. But workers don’t want to be alone in a room with a closed door, saying a customer could enter and block the avenue of escape.

“When we’re running water, we don’t hear the guest come in,” said Moreno. In her hotel, a supervisor oversees room cleaning if a customer is present.

A 30-year hotel worker in Indianapolis, a “guest runner” on the evening shift, brings towels and shampoo to customers who request them. She said that twice a week she confronts men who come to the door naked, proposition her, or worse. Managers know about this, she said, but most laugh it off.

Toronto hotel worker Andria Babbington also said managers laughed at her when she complained about a naked guest who asked to be tucked in.

“Hotels are complicit in a culture of silence,” said Annemarie Strassel of UNITE HERE. “The premise is that the guest is always right.”

Both the New York City housekeepers who reported assaults in recent weeks are union members. Because 75 percent of the city’s hotels are organized, “New York is the wrong place to prey on hotel workers,” said their union, the New York Hotel and Motel Trades Council.

But having a union is only half the battle. Housekeepers are also challenging sexist traditions. “The problem has become so normalized,” said Strassel. To break the pattern, she said, “the first and most important thing is for women to come forward.”

It’s hard enough to report sexual assault outside of work, say rape experts, because the dominant assumption is that sexual assault is partly or wholly the woman’s fault. And before DNA tests, women were more easily branded liars.

In France there’s even a time-honored phrase for what Strauss-Kahn did. His defenders referred to “un troussage de domestique,” a tradition that says domestic workers are sexually available to the master of the house. (It’s not just France, of course. California Governor Arnold Schwartzenegger fathered a child by his housekeeper of 20 years.)

Add in hotel management’s desire to please guests and sweep publicity-causing incidents under the rug, and many workers endure insults and even assaults as a part of the job. One told the New York Times that she had taken to carrying a can opener to defend herself after she was grabbed from behind while vacuuming.

If workers do report a guest’s behavior, the police are rarely called. “This needs to stay confidential,” workers in a Texas hotel were told several years ago after a worker delivering a razor late at night was grabbed and groped by the naked guest who requested it.

“No matter what we say, the managers will always respect the guest,” said Hortensia Valera at the Chicago speak-out.

The hotel worker who reported Strauss-Kahn’s assault has essentially gone into hiding, according to her lawyer. She hasn’t been able to return to work due to the frenzy of publicity, so supporters are collecting funds, through a community church. Strauss-Kahn’s legal defense team is expected to spend half a million dollars to research her past in order to discredit her, the Wall Street Journal reported.

Still, the police arrested Strauss-Kahn and the Egyptian banker Mahmoud Abdel-Salam Omar, suggesting that assault charges can be taken seriously. Since the arrests, workers have felt freer to talk about similar incidents, say hotel union organizers.

The management response has been “deafening silence,” Strassel said, adding that she’s aware of only one hotel in which a staff meeting was called around the issue.

Hotel managements have announced some changes. At the Pierre hotel, a supervisor was suspended for failing to take action after a worker reported the attack by Omar. He had requested tissues and assaulted her, she said, when she brought them. The supervisor noted the incident in the hotel’s log book, where a manager saw it the next day and called police. Now the Sofitel and the Pierre say they will provide workers with panic buttons.

It’s not enough, say union staffers. Management has to “make sure they train people more so they understand they have a right to speak up,” said Babbington, a union health and safety officer in Toronto, to a reporter. “Make sure you’re sending the message out that guests won’t get away with it.”