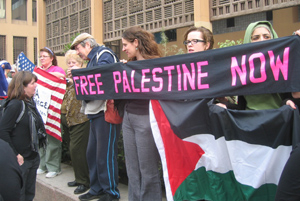 Members of unions from around the world joined “freedom marchers” in Cairo in December. Photo: Carol Gay.

Union members who want to organize U.S. labor support for war-torn Palestine often compare their cause to the battle against apartheid in the 1980s. They point to striking similarities between Israel’s occupation of Palestine and the former South African system: In Israel, Arab citizens face legalized segregation in housing and employment. In the occupied West Bank, separate and unequal conditions are even more overt.

Hundreds of thousands of Israelis live in growing settlements connected by “Israeli-only” roads. Palestinians are left in disconnected towns, stalled at hundreds of military checkpoints, and hemmed in by an Israeli-built wall that grabs more land.

And just as in South Africa, dozens of U.S. companies are involved. Industrial zones allow corporations familiar to U.S. union activists to import low-wage guest workers from Palestine and overseas.

“Palestinians are being exploited by the same entities that are exploiting U.S. workers,” says Sharon Wallace, a teacher from Kentucky who has organized two U.S. tours of Palestinian labor activists and who just returned from a pro-Palestine march in Egypt (see box).

She and a small but growing band of U.S. unionists—some of whom are Jewish—are fighting to educate fellow members and mobilize their unions behind a global call to pressure Israel with a boycott, divestment, and sanctions.

They face substantial barriers to winning union support: Activists say leaders of U.S. unions still seem enamored with the myth that Israel is a pro-labor government. In an October speech at the Jewish Labor Committee, AFL-CIO President Rich Trumka opposed international efforts to boycott Israel, suggesting that opposition to Israeli policy was anti-Semitism in disguise.

Those attitudes are reinforced by an organized pro-Israel lobby and a receptive U.S. government that sends Israel billions a year in military and other aid.

Marking a year since Israeli bombers shelled the Palestinian territory of Gaza, two solidarity convoys descended on Gaza to break the Israeli (and Egyptian) siege that has kept 1.5 million Palestinians trapped in what activists call the largest open-air prison in the world. One group led by British politician George Galloway faced beatings from Egyptian police before their aid convoy, “Viva Palestina,” trucked through the southern border crossing of Rafah.

A handful of American labor activists were among those who traveled to Egypt intent on physically breaking the siege.

International labor unions were at the forefront of the freedom march. Their aim was both to show solidarity with Palestinians, and coordinate actions with Israeli organizers against the seige.

The Egyptian government harassed protesters, forbade them to enter Gaza, and shut down multiple demonstrations. French delegates set up a tent city outside their country’s embassy in Cairo. Five hundred activists milled about downtown before pulling off a “flash mob” action, which was shut down minutes later by Egyptian police. After negotiations, 100 activists were allowed into Gaza, where a small December 31 march coincided with a solidarity march in Israel against the siege.

Carol Gay, a retired CWA international rep and activist with New Jersey Labor Against the War, was in Egypt. “The two groups of protesters couldn’t see each other, but they could hear each other over the wall Israel’s built around Gaza,” Gay said.

But when Israeli warplanes bombarded Gaza in late 2008, killing 1,500 civilians and destroying the country’s infrastructure, union activists joined protests all over the country. Several union councils, including the California Federation of Teachers, called for an end to the bombardment. On the East Coast, SEIU1199 delegates condemned the violence in Gaza and sent $5,000 to bolster medical relief efforts there.

Today in Gaza, Palestinians—45 percent of whom are unemployed—are still digging out from the rubble. Because of Israel’s blockade, they are unable to move in and out of the country or control their airspace, ports, or borders.

“Families aren’t getting paid, and don’t have jobs. So much of their resistance is just about survival,” Wallace said.

Labor activists are trying to expand isolated protests into a full-fledged campaign.

Garnering support from “a larger small group inside labor than before,” says activist Michael Letwin, Labor for Palestine recently issued a letter to Trumka calling for a boycott of Israeli goods and applauding South African unions for turning away Israeli ships from their ports during the Gaza war.

The union anti-war group U.S. Labor Against the War plans to dispatch a fact-finding mission to Israel and Palestine at the end of the year. And American unionists were among those attempting to bring solidarity and aid to Palestine in December.

USLAW staffer Michael Eisenscher notes that when the group started agitating against the Iraq war in 2003, “opposition was not a majority opinion.”

YOU’RE PAYING FOR IT

U.S. workers are connected to Israel’s occupation of Palestine because, for one thing, they’re paying for it. The U.S. is the largest donor to Israel, giving $26 billion in military aid over the past 10 years, according to the Congressional Research Service.

U.S. labor is in the mix as well: 279 labor bodies, including locals, labor councils, and the AFL-CIO itself, fill their pension portfolios with state of Israel bonds—to the tune of $5 billion. The federation owns no other country’s bonds, says Stan Heller, a longtime high school teacher in Connecticut.

Heller is heading up a labor campaign to “Dump Israel Bonds,” underway in New Haven. The labor council there has called on the state AFL-CIO to sell its $60,000 in bonds. Heller says the national Teachers union (AFT) recently sent him a letter proudly informing him of the union’s large investment in the state of Israel.

Monadel Herzallah is an activist with the Arab American Union Council; he moved from Palestine to the U.S. in 1978. Alongside patient education of American workers, he feels an urgency to support Palestinians who are resisting occupation amid a humanitarian crisis.

Herzallah’s extended family lives in Gaza. His 20-year-old cousin was killed in Israel’s bombing last December. “The level of crime being done by Israel makes it essential for the labor movement to take courageous steps to break the taboo that exists when it comes to Palestine,” he says.

Organizing from the Bay Area with labor and community activists, Herzallah sent funds to the Palestinian General Federation of Trade Unions in Gaza, whose headquarters was destroyed by Israeli bombs. His network of Arab American unionists has plans to train, educate, and provide equipment to Palestinian unionists, to develop more than a cosmetic solidarity with them.

Herzallah believes the outrage over conditions in Gaza is opening up space for labor activists to organize against the occupation. And, he points out, the U.S. government’s giant military aid to Israel is part of the lavish war spending that’s draining funds needed in the states and drawing growing criticism from U.S. unionists.

A version of this article appeared in Labor Notes #371, February 2010. Don't miss an issue, subscribe today.
Related
'2,000 Zloty for Everyone': Polish Amazon Workers Demand Bonus »
George H.W. Bush: Not So Civil After All »
Labor Notes: Making Trouble for the Bosses Worldwide »
Honduran Unionists Back Presidential Election Recount »
From Indonesia to Honduras: How Anti-Sweatshop Activists and Unions Made Severance Pay Mandatory »

I would have thought that when Abowd discovered the the head of the
AF-CIO says “And, tonight, let me tell you that, so long as I’m
president, you will never have a stronger ally than the AFL-CIO!
That’s why we’re proud to stand with the JLC to oppose boycotting
Israel! “, that US labor unions hold 5 billion in Israel bonds, that
the AFT boasts of its large Israel investments, that he might wonder
why this is so?

He gets no further than mention of “an organized pro Israel lobby,”,
no references or further explanation , and a “receptive U.S.
Government...” So, hoodwinked again (let's not say by whom.)

Trumka did not suggest in his Oct. 2009 speech that “opposition to
Israeli policy was -anti-semitism in disguise.”, he discussed the
boycott movement in the context of anti-Semitism. Abowd does not
rebut, he does mention that some of his best activist friends are
Jews, and fills out the inches with what appears to be a Hamas press
release. He might have mentioned that firing thousands of rockets and
mortars into Israel was an act of war, and unlikely to go unanswered
indefinitely. In citing barriers, mention of problems in dealing with
suicide bombers would be appropriate.

It is not only the antisemitism, and the Daily Worker level of
analysis, it is the ignorance of our history. We were the first to
recognize Israel as a nation, Harry Truman famously taking 12 minutes
to do so. Israel is an ally, not because its government is “pro-labor”
but because it is a democracy. We, members of labor unions and others,
have supported and invested in Israel because we share the same
outlook, and wished to see them succeed. Before throwing in ones lot
with an Islamist terrorist group dedicated to destroying Israel, one
should be more thoughtful.